On the surface, The Human Comedy is a story about the Macauleys, an American family during WWII.  The father (Ray Collins) has died two years ago, but provides narration in his afterlife.  Oldest son Marcus (Van Johnson) is away from home serving in the army, leaving middle teenage son Homer (Mickey Rooney) home working as a telegram delivery boy to help support the family.  Ulysses (Jackie ‘Butch’ Jenkins) is just a little boy asking his mother where his father and Marcus have gone and Mrs. Macauley (Fay Bainter) and sister Bess (Donna Reed) in her late teens run the home.

It wasn’t long before I was seeing a very mythological setup happening.  In the epic poems from ancient Greece, the Iliad and the Odyssey were written by Homer telling the story of Odysseus, known in some forms as Ulysses, who lives in Ithaca.  To me, that trifecta could not be ignored, but how is the story affected by the mythology?  I have come up with some unstable theories, but found nothing to back them up.  Perhaps Homer’s perspective on the war will help him guide his younger brother through life.  Maybe the misadventures Ulysses has and his childhood discoveries in the film can be compared to Odysseus’s journey.  But where does Marcus come in, does he simply personify the Trojan War?  What are we to make of the ghostly father?  Perhaps I’m trying to find too much meaning in a film that is simply about WWII on the American home front.

Homer works with two men.  Tom Spangler (James Craig) is younger and very encouraging to Homer, while white haired Willie Grogan (Frank Morgan) has been in the telegram business a long time.  Because of all the bad news Willie has been the barer to, he drinks too much.  He even gives Homer instructions on what to do if he becomes too drunk at work, which Homer does have to deploy a couple times.

As we expect, Homer’s job delivering telegrams brings heartache.  One touching scene is when Homer delivers his first telegram to inform a woman that her son had died in the war.  He’s nervous and to make matters worse, the woman cannot read.  As he reads the awful news to her, Homer nearly breaks down crying trying to comfort her by saying that maybe the army made a mistake.  This woman is still a mother, takes pity on the boy and gives him some candy.  She sits in a rocking chair, starts singing to herself and the image changes to her as a young woman cradling a baby in that same chair, then changes back.  The whole scene heartbreaking but unexpectedly sweet.

Throughout the film, we’re shown progress on Homer’s brothers.  Marcus plays the accordion and leads the men in songs to keep their spirits up, even as they’re on a train towards war.  He tells his new friend Tobey (John Craven) everything about Ithaca and his family, making Tobey want to live there after the war.  Meanwhile, little Ulysses has adventures around the neighborhood discovering the library and trying to steal apricots with the other boys.  One of the best moments with Ulysses is when he first discovers fear; he’s small enough that that concept hasn’t dawned on him yet. Ulysses is watching a man dressed as a clown in the drugstore window, after all the other people have dispersed the man scares Ulysses, sending the small boy crying in the streets.  When Homer finds him and asks what has scared him so badly, Ulysses becomes overjoyed realizing that he now understands what fear is.  It’s a sweet moment that also ties into Marcus realizing his fear of deployment and dying in the war.

In the end, The Human Comedy is wonderful film even though it seems to lack a real plot and the mythological references seem only half conceived.  This might be Mickey Rooney’s finest work, his Homer is heartfelt, driven and a wonderful portrait of a boy forced to grow up too fast because of the war.  If you want to see this film, it’s best to keep an eye on Tuner Classic Movies, it took me months to find this. 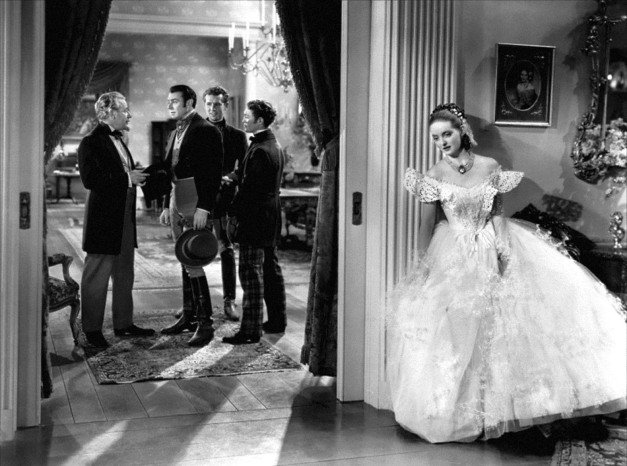 Many times, vanity is the driving force behind the poor decisions young women make.  In today’s society, it seems that women are supposed to constantly primp and flaunt what they’ve got.  Makeup is generally expected all the time and breast implants are perfectly acceptable cosmetic surgery. Everyone is in competition to be the prettiest girl at any occasion.  Now and then, we see one woman who has taken her vanity to a socially unacceptable level and cannot come back from the boundary she has pushed.  This is our modern interpretation of a Jezebel, a painted, false or fallen woman. 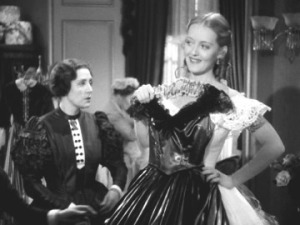 In Jezebel, Julie (Bette Davis) is a confident, headstrong Southern Belle in the 1850’s.  She rides a dangerously wild horse and is practically engaged to Preston (Henry Fonda) a successful young banker.  When Preston is busy at an important bank meeting, he breaks his promise to go to Julie’s dress fitting.  Fueled by vanity and an I’ll show him attitude, Julie decides to wear a red dress to the ball.  In Antebellum Louisiana, the idea of an unmarried girl wearing anything but white is unheard of and scandalous.  Everyone desperately tries to talk Julie out of it, but the selfish girl won’t budge.

At the ball, everyone stares disgusted and offended at Julie in the red dress.  Even her parents seem to slink away in disappointment.  Preston tries to defend her at first, but he’s being shunned as well.  Against her will, he takes Julie out on the dance floor to finish what she’s started and people leave, not even wanting to dance near such a harlot.  The scene nearly feels like a nightmare.  We see the humiliation take over the pride within Julie.  Her stubborn decision to wear the red dress will cost Julie her Preston.

A whole year goes by with Julie having no suitors or social life.  When she hears that Preston will be visiting again she tries to make amends to win him back, but he’s already been taken.  He’s married Amy (Fay Bainter), a northern girl.  Regaining her spite, Julie starts fueling a North vs South debate that ends up in an old fashioned duel.  There’s also a yellow fever outbreak that causes heartbreak, widespread terror and a chance for atonement.

Bette Davis gives a beautiful Oscar winning performance as Julie.  She’s tenacious, bold and confident with such grace and poise.  When she realizes the consequences of her actions, the lament and shame in her eyes is moving.  She’s beautifully coy in her push on the North and South debate.  But her most moving scenes are toward the ending with Bainter’s Amy, who also took home an Oscar for her supporting role.

With today’s media building up the self-entitled generation with shows like My Sweet Sixteen, Jezebel is the movie every spoiled girl needs to be shown.  The story is a wonderful cautionary tale, that I would not mind seeing in a modern remake.  That’s a rare thing for me to say.  Until we’ve found a film maker who can do this story justice, sit your kids down with this film and have a good talk about social expectations and the consequences of defiance.

“Child, you’re out of your mind. You know you can’t wear red to the Olympus Ball.”