I had a writing professor once tell me that the best autobiographical stories are not written the day after the event. It is best to wait and let it age, like a fine wine. She suggested about ten years, maybe more. In Lady Bird, director and writer Greta Gerwig tells a coming of age story about a girl in her senior year at a Sacramento Catholic high school in 2002. It may not be autobiographical, but the viewer can easily assess that some of the tale is inspired from life. For me, and perhaps others who left high school in the early 2000s, Lady Bird is one of the first coming of age stories from my generation about my generation and told so well and authentically that I just want to personally thank Gerwig for this wonderful film.

Christine is such a strong willed teenager that she has renamed herself Lady Bird (Saoirse Ronan). She also rolls out of a moving car when her mother (Laurie Metcalf) starts bashing her big college dreams over her grades. The neon pink cast that results is a constant reminder of her style: brash, defiant, but not invincible.

The story unfolds along Lady Bird’s senior year of high school. She has friends, joins clubs and finds a boyfriend only to toss them aside later in her attempts to find her true self. The things that really matter are never truly lost. It’s a rollercoaster of a year for our Lady Bird, like watching a whole high school career of angst shoved in one sitting. And then there is the added pressure of applying to colleges.

Lady Bird has big hopes of going to college on the east coast, far away from her suburban Sacramento life that she claims has no culture. Her family is not the most well-to-do, and even jokes with some friends that she lives on the wrong side of the tracks. With her father’s help, and behind her mother’s back, she applies for financial aid and to her dream schools. It’s a big, bold step in her preparation to leave the nest.

Lady Bird attends a Catholic high school, though it appears she doesn’t practice the religion herself. In fact, there is a great scene where she pulls a prank on a nun and another where she ruins an assembly on abortion. Nonetheless, there are times when the Catholic influence is apparent in both positive and negative ways. A poignant scene where her mother is so upset she won’t even speak to Lady Bird, she apologizes and pleads in the kitchen at her mother, “I know I’m bad. I know I’m not good enough. I’m sorry.” I’ve never seen a more realistic depiction of Catholic guilt. Both Ronan and Metcalf nail the love and tension in this scene, as they do in the whole film. 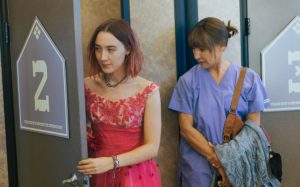 Lady Bird has been nominated for five Academy Awards, including Best Picture. Greta Gerwig is nominated for best director, the first woman nominated since 2009. Our leads, Ronan and Metcalf are nominated for lead and supporting actress. Lady Bird is also nominated for original screenplay. Though I realize the field is very thick this year, I personally hope Gerwig wins for director. I hope this not just because she is a woman and a bit of an underdog in this category, but I truly think she directed an amazing, poignant film and deserves the win.

What makes Lady Bird such an amazing film are the wonderfully talented actors and the authentic storytelling. Saoirse Ronan leads the film with such vigor, she becomes the defiant, half-bloomed Lady Bird with natural ease. And Laurie Metcalf butts heads so perfectly with her that the two together are a perfect mother-daughter storm on screen. The story they, the other fine actors and Gerwig tell is a unique coming of age story that resonates with so many, especially young women.

“People go by the names their parents give them, but they don’t believe in God.”

First off, let’s state the obvious. It’s refreshing to see a superhero movie with a woman in the spotlight and not on display for her body, but for her abilities. Sure, we’ve seen female superheroes before, but they’ve never had the opportunity a feature film like this. And if we look back at some (not all) of their past film roles, things look really sexist. Not so for Wonder Woman.

In Patty Jenkins’s Wonder Woman, Diana (Gal Gadot) is raised as the only child on an island of Amazonian women. The island life is peaceful, beautiful and idealistic, as are many people’s childhoods. Diana’s mother, Hippolyta (Connie Nielsen), is reluctant to train her to fight. All the women are fierce warriors and just as Diana becomes the fiercest, a man crash lands just off the island. Diana saves him and learns of a great war plaguing the world. She leaves to fight and bring peace to mankind again.

The film makes perfect Diana realistically flawed. She is young, naive and fueled by her black and white ideology, but weren’t we all once? She believes that if she can kill Aries, the god of war, all war will stop and mankind will be peaceful again. We know men aren’t so easily changed.

For a feminist film, Wonder Woman gets a lot right. Diana is both beautiful and strong, with her power often overshadowing her beauty. She wears her iconic suit, allowing her free movement, but not making her an object of male gaze. Unlike other superhero ladies, the visual emphasis is not focused on her butt or breasts and she is not adorned with an unrealistic amount of makeup.

The movie is aimed for the female gaze, which is something you rarely see outside of the romcom genre. Chris Pine, as Steve Trevor, the Allied spy, takes on the role of the hot sidekick. The Bond Boy. The eye candy. And does he deliver! Sure after leaving the island Diana is mostly surrounded by dudes, but thankfully they’re a diverse group of misfits and not all of them hit on her. By the end they all revere Diana and understand her immense power.

The film uses Diana’s girl power for some tasteful comedy. A few scenes between Steve and Diana bring some light sexual flirtation, but the line, “When it comes to procreation, men are essential, but for pleasure, not necessary.” puts Steve in his place. That’s as crass as it gets. There are no jokes about boobs, periods, mood swings or anything that really demeans women. I love it. I especially loved and identified with the scene where Steve’s secretary takes her shopping for an outfit more acceptable for 1910s London. If you don’t kick your legs up in the dressing room to see if your clothes can move with you, then you’re missing out.

As refreshing as this film is, there is still so far to go. I realize the romance between Diana and Steve helps seal her understanding of love, but did the story really have to depend on romantic love? I’d happily see her take a similar path to Frozen and work the platonic girl power, but that’s just me. And I honestly hope to see a version of Wonder Woman where naturally hairy legs and armpits are acceptable. This is a great and commendable step and I hope it helps propel the miles we have to go.

“It is our sacred duty to defend the world. And it is what I am going to do.”