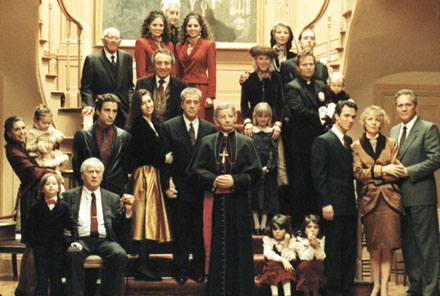 To call Francis Ford Coppola’s final installment of The Godfather trilogy a disappointment is a bit harsh, but it does not live up to the great expectations the previous two had exceeded.  It is still done better than most films of its time and deserves the numerous Oscar nominations. 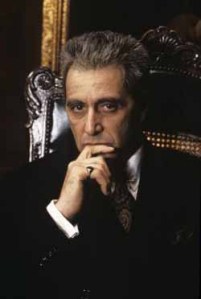 In Part III, it is 1979 and the aging Don Michael Corleone (Al Pacino) is feeling the pressures of his past wrong doings.  He has been attempting to legitimize his business, embracing corporate America, but has still become very wealthy through blood money.  To help his image, he is appointed Commander of the Order of St. Sebastian, a very high honor in the Catholic Church and in return makes a large donation in the name of his new foundation in his father’s name.  This is the classic Corleone equation we have seen in the previous films: church function + generous donation = image boost.

There seems to be a large focus on Mary (Sofia Coppola) and Tony (Franc D’Ambrosio) as children, even though they are now grown.  Throughout the film, there are references to their childhood traumas and memories of the business.  They always have this need for their father’s approval, even with their mother, Kay (Diane Keaton) on their side.  When Tony tells Michael that he wants nothing to do with his business, it does not feel like a conversation between two grown men who happen to be father and son, but more like a little boy trying to get out of something his father had planned for him, like it’s not bigger than a baseball game.  This new generation doesn’t feel the need to grow up like the previous ones, and I cant tell who’s to blame for this. 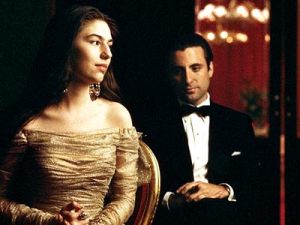 While we see Michael having a change of heart, thinking more of his children and their future outside the business, it seems he does not know how to break away from it completely.  His financial dealings with the Vatican feel very fishy and seem bigger than he could have planned.  His nephew, Vincent (Andy Garcia) is more ruthless and ambitious than Michael ever was, and as he becomes closer to Mary, puts her in danger.

There’s something about this Part III that is just not as good.  It just is not as compelling as the other two.  It feels like something is missing, some driving force that made the other two films to mesmerizing, it’s just not there.  And that is a bit disappointing.  That being said, it’s still a better film than most made, earning nominations in most of the major categories.  It just falls short in comparison to the extremely high expectations its predecessors proudly set.  It’s worth seeing just to wrap up the story of the trilogy, but we’ll cherish moments from the first two far more.

“I swear on the lives of my children, give me one last chance to redeem myself and I will sin no more.”