Easy Rider follows two young men of the 1960’s counter culture as they travel on custom motorcycles from Los Angeles to New Orleans, for Mardi Gras.  Their trip is funded by a cocaine deal at the beginning of the film.  Along the way, we are shown images and a variety of people that make up the American landscape and ideas of freedom.

To sum the two main characters up, they’re hippies.  Billy (Dennis Hopper, who also directed the film) has a stoned frontiersman look, with his long hair mixing with his facial hair, fringed jacket and hat combination.  Usually, Billy is the one on edge, slightly paranoid and says “man” far too often, a byproduct of constantly smoking weed.  Wyatt, or sometimes called Captain America (Peter Fonda), is much more placid, rational and seems more thoughtful.  He sports an American flag on the back of his black leather jacket, matching his chopper and helmet.

The people they meet on their journey show a wide variety of life in America.  In the west, there is a man with a large, Mexican-American family who seem to happily live off their own land.  They are kind to Wyatt and Billy, sharing a meal with them and Wyatt seems genuinely impressed with what the man has made of his life “It’s not every man that can live off the land, you know. You do your own thing in your own time. You should be proud.”  After picking up a hitchhiker, they take him to his commune, full of young adults with children trying to live off the land in the desert.  To many today, this seems like an ill-advised approach to utopia, but they’re also kind to the travelers, even though they don’t have much to offer.  Later, in the deep south, the riders are less welcomed.  The gaze from the local working class men feels omnious, and their mumblings about how they won’t make it past the parish line is threatening enough to make Billy and Wyatt leave a diner before even being waited on.

The most interesting person Wyatt and Billy meet is George Hanson, a role that earned Jack Nicholson his first Oscar nomination.  He’s a young lawyer, speaks and dresses like a Southern gentleman, but they meet in a jail cell.  After talking, George wants to go with the guys.  You can sense he wants to get away from this small town, plus his local connections and basic knowledge of Southern ways can help them out.  The guys introduce George to his first joint, quite different from his usual Jim Beam. 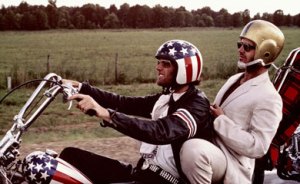 George embodies a cross over between the two polar opposites in this film.  They could be boiled down to the simple, derogatory terms hippies and rednecks, but George can both and neither at the same time.  I digress.  George connects with Billy and Wyatt in a way he cannot with his friends and family back home, but understands the locals in a way that Billy and Wyatt cannot.  This is best shown in the campfire conversation about freedom, where George says, “Of course, don’t ever tell anybody that they’re not free, ’cause then they’re gonna get real busy killin’ and maimin’ to prove to you that they are.”  George makes it apparent that some people are threatened by the type of freedom people like Billy and Wyatt represent.  This seems to be a real danger that they had not realized back in Los Angeles.

As I watched Billy and Wyatt roll through little towns, I couldn’t help but lament a past I was too young to know.  Road trips just don’t look like that anymore.  Too many gas and fast food chains break up the scenery, any hotel will take you if you’ve got a credit card, no matter what you look like.  And today, redneck culture has adopted both motorcycles and the overuse of the stars and stripes.