Minority Report is centered around a system in the future that can prevent murders from happening.  At first glance, that sounds pretty great and has worked so well that not a single murder has occurred in the last six years.  As we are able to see deeper into the “precrime” unit, there are faults, a tangled web of deception and a sense of morality being lost.

Chief John Anderton (Tom Cruise) runs the precrime unit like a preventative detective of the future.  Thin glass screens display images like details from a dream that come directly from the minds of the three PreCogs, gifted young people in a suspended state of half consciousness that can see murders before they happen.  Anderton and his team decipher the images and names the PreCogs produce to swoop in and stop murders in time.  They arrest the future murderers before they have technically done anything and send them into a suspended numbed state in an efficient jail.

Tensions are built when Danny Witwer (Colin Farrell) investigates the precrime unit, looking for flaws.  Anderton upholds the unit,  his personal history involving a murdered son sealing his alliance.  But when he discovers that the PreCogs have named him as a future murderer, Anderton becomes a fugitive.  With knowledge of his future, he can choose whether to follow his predestined outcome or not.  With his ability to choose, and new knowledge he finds about the PreCogs along the way, he could bring down the whole system. 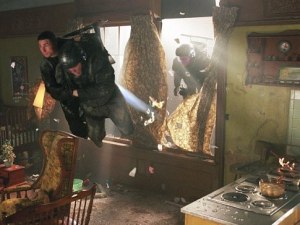 What makes Minority Report work like a well oiled machine, is the mix of engaging plot, a detailed futuristic setting and use of repetitive images.  Many times, it feels like Spielberg took the basic ideas that make Blade Runner and Vertigo so distinctly memorable and used them both at times here.  In Blade Runner, there is a focus on the futuristic world, with many details contributing to its atmosphere.  The same treatment is used here, in a very different future world.  Light is always very bright and unnatural, eye scanners identify you at every turn and then advertisements are personalized, calling you out by name as you pass by.  Themes from Vertigo are played up by use of repetitive image to create an uneasy recognition.  These images start piecing together, bringing us closer to a future murder and suspense is created beautifully.  There is also a great Hitchcock reference in a car assembly line scene, a scene all Hitchcock’s idea, but one he never got to make.

Even though Minority Report has made me look back to other films, it stands on its own perfectly.  There is plenty of action, all played out in very smart and engaging ways.  While Anderton jumping from one vehicle to another is thrilling, the jetpack scene has some comical elements.  The photography is very grainy and has a dirty feeling, yet washed with bright light that contributes to that futuristic look.  I loved Max von Sydow’s character and performance, the little time he has on screen goes a long way.  Best of all, the story had me engaged and guessing to the end.  I highly recommend Minority Report.

“Shh.  Do you know what I hear?  Nothing.  No footsteps up the stairs, no hovercraft out the window, no clickety-click of little spiders…”