Darkest Hour puts the first few weeks of Winston Churchill’s time as Prime Minister under a microscope. It is May 1940, and England’s politics are shaky as Neville Chamberlain is voted out as Prime Minister. Churchill is not the first choice, and has his political enemies, but is appointed next. With the fall of France, it looks as though Hitler and his Nazi army will take over all of Europe. Just across the channel, the entire British army is stranded at Dunkirk and surrounded by the invading German army. If nothing is done, the British army will be completely lost within days. Meanwhile, Churchill’s advisers are pushing for him to surrender to Hitler and attempt to negotiate peace, before it’s too late. How will Churchill pull his country up by its bootstraps, save their army and stand up in the face of doom and tyranny?

Gary Oldman becomes completely immersed in his transformation into Winston Churchill. The flawless makeup done on him makes Oldman completely unrecognizable, I expect that award to be given easily. But just as impressive is Oldman’s acting, fleshing out Churchill not only as a historical figure, but as a man who seems larger than life at times. The fact that Oldman studied Churchill and his mannerisms over a year to prepare for this role shows his dedication to getting it right. I’ve also heard that he tried not to be influenced by other actor’s portrayals of the man and I think it has worked out well. While Oldman’s performance feels authentic, it is also unique compared to other films and shows about Churchill. 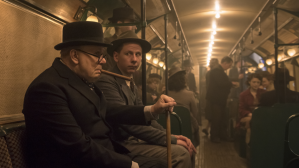 A favorite scene of mine was towards the end when Churchill decides to ride the underground to Parliament. He escapes out of his personal car without his driver noticing and immerses himself within the bustling streets and busy people of London. A young woman helps him navigate the underground map and as he enters the train, a once hum-drum commute is suddenly shaken by his presence. But Churchill doesn’t lord his power and prestige over the people he serves, but rather strikes up conversations with everyone around him. He shakes hands, takes names and asks them all, children included, if they should consider negotiating peace with Hitler, or stand and fight. Thankfully, the people of London are much more influential on Churchill than his advisers.

Darkest Hour is currently nominated for six Academy Awards, including Best Picture. Gary Oldman is obviously in the running for best actor and favored by many. The other four awards compliment the visual details and appeal within the film: best makeup and hair styling, production design, costume design and cinematography.

While some may worry that Darkest Hour is a dry biopic, I assure you that it is not. Churchill’s gusto and antics keep the film light and human even when depicting such a bleak moment in history. The rich cinematography and attention to detail around the film make it a visual treat. And whether you are a history buff or not, you’ll probably walk away from the film knowing a little more about just how close all of western Europe came to collapse in May 1940.

“Nations which go down fighting rise again, and those that surrender tamely are finished.”

The third installment of Christopher Nolan’s Batman trilogy picks up eight years after The Dark Knight.  Since then, Gotham has adopted Harvey Dent as their hero, keeping hundreds of thugs and mob men locked up under an act named for him, and the Batman hasn’t been seen since Dent was killed, taking all the blame.  Only Commissioner Gordon (Gary Oldman) knows the truth about Dent and Batman’s innocence, but since this lie has helped make Gotham peaceful, he keeps the real story for another day.  The whole city is unaware that a storm is brewing, led by a man more evil and powerful than Gotham has ever encountered, Bane (Tom Hardy).  Bruce Wayne (Christian Bale) first gets wind of this from a thief putting her allegiance in the wrong hands, just looking for a clean slate, Selina Kyle (Anne Hathaway).  Bruce knows he must bring the Batman back to protect Gotham from this new rising terrorist, even though Gotham believes he is an enemy. 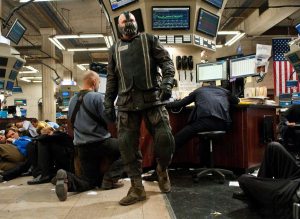 Throughout the film, there is the idea of pain, both physical and emotional.  There is Bane, his mask sending him a constant surge of morphine.  For a while, Gordon is in the hospital and we are told of his broken family.  We see Bruce limp, struggle to fix his leg and later physically build himself again.  Alfred tries to spare him pain by hiding the truth about Rachel.  And Blake (Joseph Gordon-Levitt) and Bruce understand each other from their experiences growing up as orphans.

Then there is the idea of class warfare.  In all three films there has been a large gap between Gotham’s elite and the lowest of the low.  The fact that Wayne Enterprises has stopped funding an orphanage does not help.  Bane exposes this flaw and lets Gotham’s prisoners take control of the city, while trapping all the police underground.  Suddenly, the wealthy are thrown onto the streets while thugs crash in their homes.  And Bane begins this madness at a football game, destroying the stadium and a private box area  in front of a full crowd.  I doubt tickets to a Gotham Rogues game are cheap.

Then there is the idea that one man’s tools can become another man’s weapon.  It is hard not to be sickened by the stark reality of this after the shooting during this film in Colorado.  Anyone familiar with Batman comics knows that only villains use guns and Batman seldom kills.  His tools are designed only for him by Fox (Morgan Freeman) and hidden from falling into anyone else’s hands.  But Bane breaks in and starts using the tank-like batmobiles to roam and threaten the city.  Worse, Wayne Enterprises has secretly developed a fusion based sustainable energy source, but in the wrong hands, it has been turned into an atom bomb capable of destroying all of Gotham.

I believe The Dark Knight Rises was the best film of the summer.  How that will hold up come Oscar season is always questionable.  Nolan’s last summer smash, Inception, was a Best Picture nominee.  There is also more favor toward the finishing film of a trilogy with the Academy (LOTR:ROTK cleaned house) and TDKR finishes this franchise in a strong fashion.  Considering how there have been 10 nominees for the past three years now, I would not completely count TDKR out of the running, but I do consider it a long shot   However, I’m sure some sound and visual effect nominations are in store.  And did anyone else feel especially moved by Michael Caine’s Alfred this time around?  I know the field is thick, but I hope I’m not the only one looking for a supporting nomination there.

“Ah you think darkness is your ally?  You merely adopted the dark.  I was born in it, molded by it.  I didn’t see the light until I was already a man, by then it was nothing to me but blinding!”

In early 2008, The Dark Knight was well anticipated for its summer release when it encountered unexpected tragedy.  On January 22, 2008, Heath Ledger died of an accidental overdose of a sleeping medication.  Days before his death, I remember seeing teaser posters going up in the local theater, with Ledger’s Joker hazed and writing Why So Serious? in blood in the foreground.  The weekend after Ledger’s death, those posters were gone.  The premature end to a great, young actor was too serious for the film community to keep such an ironic image in the public eye.  To further the sad irony, The Dark Knight deals with elements of chaos and tragedy that Ledger’s Joker unleashes across Gotham.

In The Dark Knight, Batman has become a well known vigilante, but not everyone agrees that what he is doing is good.  While some criminals are running scared, others are larger than ever, seeming to act out of defiance.  This leads some to believe that the Batman should be arrested.  But with the arrival of a new kind of criminal, who doesn’t have any motive other than just to throw Gotham into pure chaos, Batman is necessary.  Meanwhile, Bruce’s love interest, Rachel (Maggie Gyllenhaal) is now dating Harvey Dent (Aaron Eckhart), Gotham’s District Attorney.  It’s only a matter of time before they become The Joker’s targets.

It takes an amazing amount of discipline to portray chaos in a manner that doesn’t leave the audience confused.  In the film, Nolan has scene after scene of Gotham being thrown into The Joker’s insane plots to deal with and control.  There’s an attempted assassination during a memorial service.  Two ferries, one full of civilians, another full of prisoners, with the ability and choice to blow the other ferry up, or they will both be destroyed at midnight.  Most nerve wracking, in my opinion, is the threat that The Joker will blow up a hospital (we can only guess which one) if a certain man is not dead in an hour.  This puts all of Gotham in a frenzy to evacuate all the hospitals and protect a man that many citizens are trying to kill.  With The Joker hatching new schemes and Batman, Gordon (Gary Oldman) and the rest of Gotham scrambling to keep up, there is never a dull moment in this film.

The Dark Knight was nominated for an astounding eight Academy Awards, mostly for technical aspects, but only won two Oscars.  Heath Ledger posthumously won the award for best supporting actor with his daring and twisted portrayal of The Joker, and rightly so.  Every scene he is in, he controls it and mesmerized the audience.  His demeanor is so unsettling and raw that we are drawn in out of curiosity and cannot look away out of fear.  Some of his moments are hilarious in his own menacing way.  I love him visiting Harvey in a nurse’s uniform, complete with a red wig.  Others are horrific and surprising.  The magic pencil trick is a moment that shocks us and before we can even process what just happened, the scene is moving on with no remorse.  The Joker is a role that could mess with anyone’s head, and Ledger pushed boundaries with his character to points where his audience was in awe, disbelief and admiration.  He is an actor that is dearly missed.

Out of the trilogy, I hold The Dark Knight far above the other two films, and believe it is one of the biggest Oscar snubs in the past decade.  In fact, I suspect the Academy began picking ten Best Picture nominees after 2008 because of the great error in not nominating this film.  The story moves fast and keeps the viewer on the edge of their seats.  The sounds and visuals are amazing and immersive. And Nolan’s direction is only surpassed by Ledger’s acting.  Though other films based on comic books have been good, none were great until The Dark Knight.

“You have nothing, nothing to threaten me with.  Nothing to do with all your strength.”