Will (Matt Damon) is a young man with hidden genius, but no motivation or direction in life.  He grew up as an orphan in southern Boston, works as a janitor at MIT and hangs around with a gang of punk Boston boys (including Ben Affleck) who beat up their old kindergarten bullies.  Their most intelligent conversation contains about five profanities within it over a few pints.  It’s easy to see where he’s held back. 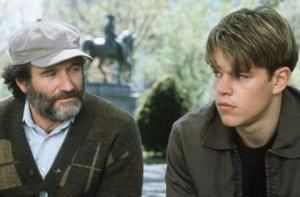 One day at work, moping the hallway, Will spies an equation on a chalkboard and nonchalantly solves it.  Professor Lambeau (Stellan Skarsgård) displayed it hoping that one of his students would be able to solve it by the end of the term.  Lambeau tracks down Will and takes it upon himself to help him reach his genius potential.

But there’s more to Will than hidden genius, he’s got some deep psychological issues that keep him in a dead end job and getting into trouble with his friends.  He finds holding a blue collar job honorable, even romantic, and who’s to say that’s wrong?  After a few fun scenes messing with some therapists, Lambeau sends Will to Sean Maguire (Robin Williams), his close friend and great therapist.  Right away, Sean realizes Will is a tough egg to crack and nearly loses his cool at first.

Their second encounter is where we find the meat of the story.  Sean elegantly rips Will apart alongside a lake watching swans, “You’re just a kid, you’ve never even been out of Boston.”  It’s the first time Will realizes that he’s just book smart with no experience.  And it’s not practical experience Sean brings up, but experiencing culture, beauty, love and life in general.  Will has never taken a chance to do something positive with his life, but in which direction is it?

Trying to help Will is like that thing about a horse and water, you can’t make him drink.  The harder Lambeau pushes, the more Will resists and Sean knows that Will might be seeking more than Lambeau’s definition of success.  It nearly feels like Will has closed his ears to the world until his buddy Chuckie tells him, “You’re sitting on the winning lottery ticket and too much of a pussy to cash it in.”

Is there a right and wrong path for Will?  Is it his duty to use his gift of intelligence or does he simply need to find meaning in life?  Director Guss Van Sant has a way to be preachy while lacking general opinion.  The film can argue and preach the opposing view points over and over, but a strong conclusion is never fully revieled.  For some viewers, that’s a good thing, keeps everything subjective.  Others may get confused or angry wanting a clear answer with no conflict with Will’s end decision.
Good Will Hunting went to the Oscars nominated for nine awards and came back with the best original screenplay (written by Damon and Affleck) and Robin Williams winning best supporting actor.  Not bad against the unsinkable, but I’ve never cared for Matt Damon’s acting anyway.

I would say that Good Will Hunting is inspired in an uninspiring way.  It’s roots are smart and dwell deep under every characters exposed skin, yet leaves me wanting more.  There seems to be an extra mile that lies beneith I can only imagine, yet I have no idea where it could lead.  I guess the unanswered questions nagging me at the end are just a matter of unresolved philosophy and an elegant way of keeping their amazing Will an enigma.  Everyone is more interesting when they’re an enigma.