I first encountered Patton in Mr. Acton’s American history class in high school.  Though my depiction of a civil war battle was red and blue cowboys glued to a piece of cardboard, I learned more about history in Acton’s class than any other.  We also watched 1776 and Oh Brother Where Art Thou? Best class ever.

The film follows General George S. Patton Jr. through the highs and lows of his military career during WWII.  He’s an ambitious rebel general wanting to shape up his troops and take on Romell and all of Germany all by himself.  But his loud mouth and quick temper get the best of him and nearly cost him the chance to lead his troops into the most pivotal moments of the great World War. 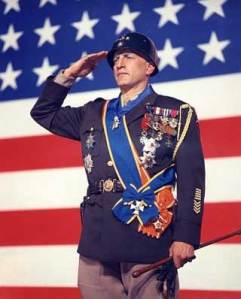 In the film, General George Patton is depicted as one of the strangest and greatest military men in American history.  He’s a military fanatic, believing in harsh discipline and has read many historical accounts of battles, all the way back to the Roman Empire.  Patton also believes in reincarnation, stating the he was a soldier for Napoleon and finds an ancient battle ground where he recounts a detailed description of what happened.  He writes beautiful poetry and curses like a sailor.  The opening speech in front of the flag, full of ruthless bloodlust, was taken by many things Patton said throughout his career, but much of it had to be watered down, “like crap through a goose.”

Patton would not have been so remembered without the talent of George C. Scott, who we’ve met earlier in The Hustler, Anatomy of a Murder and Dr. Strangelove.  He won the Oscar for lead acting, but did not accept it, referring to the Academy as a “meat parade.”  That’s alright, we can still honor him and refer to his performance as one of the best in film history, whether he liked the Academy or not.

Patton is one of those rare war films.  It’s not focused on a mission or the everyday soldier or even the fate of the war.  Nope, it’s all about Patton.  If he’s not on screen, people are talking about him.  The Germans think he’s running the whole show and seem to glorify him more than the Americans.  All other characters are there just to help raise him up, and it works.  This isn’t a bad thing at all, we want to know all we can about Patton.  I mean, who wouldn’t?  But there’s no way we can get completely under that thick helmet, much of him is still an enigma.  It’s probably best kept that way.

I was surprised to see that Patton didn’t win the cinematography award, it seems Ryan’s Daughter must be something beautiful for the eyes.  Up close explosions and tanks about to run the camera over are brilliant.  During night battles, the explosions become smoky illuminations, casting a majestic glow over tanks, men and trees.  The film’s focus is on the military, yet the background is full of wonderful landscapes.  Tanks roll through African plains, smoke rises against hazy blue skies and mountains.  I found it beautiful and strange how a film with so much military strategy and explosions never sacrificed an opportunity for nature.  It feels like an old soul, just like Patton.

Or: How I Learned to Stop Worrying and Love the Bomb.  This movie is officially classified as a Suspense Thriller.  From mouths I don’t like to listen to, I’ve heard Stupid and Boring.  For me, the words Witty and Masterpiece come to mind 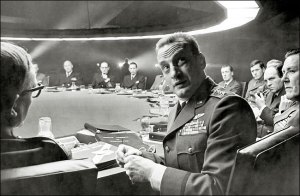 Before the movie even starts, a little disclaimer comes up, basically telling the viewer not to freak out over nuclear war breaking out because of the situation ahead.  They claim that it could never happen, so just relax and have fun.

General Jack D. Ripper (Sterling Hayden) has just over exceeded his authority and ordered his air troops to drop nukes on Russia.  His aid (Peter Sellers) must now figure out the three letter code to terminate the bombers mission.  Meanwhile, the President (Sellers again) is meeting in the War Room and trying to explain over the phone to Russia’s president, who’s probably drunk, that what’s about to happen was just a silly mistake.  Even if Russia was to understand, it will do no good, because they now have a Doomsday Device that will destroy all man kind!

Yes, this plot looks very grim, but the way it’s told is not.  The film is full of colorful characters that brighten such a stark reality.  General “Buck”(George C. Scott) gets a call from his secretary/mistress in the War Room is so fun to listen to and delivers some side splitting lines.  You can’t help but giggle when the President is trying to apologize with the drunk Russian president.  And let’s not forget the pilot of the B-52 who puts on his cowboy hat when they get the call to drop bombs.

The character who tops them all, is the titled Dr. Strangelove (Sellers yet again).  He’s a paraplegic ex-Nazi scientist who helps explain the Doomsday Device and all its inconsistencies.  Everything from the way he talks through his eerie grin to his involuntary Nazi salutes is fun and fascinating to watch.  His shining moment is right at the very end, so don’t miss it.

There are thousands of things to praise about Dr. Strangelove.  Among many awards, it’s ranked third in the American Film Institute’s list of 100 greatest comedies. The music and image choices at both the beginning and end are legendary in the realms of dark comedy.  Hilarious situations, like the pay phone and Coke machine, are so relevant they’ve actually raised concerns from the government.  And the depiction of the War Room and its big board have become well known and recognizable throughout our culture.

Here are some fun things to look for throughout the movie.  Many shots are cut away from characters, mostly when Dr. Strangelove is speaking, because everyone in the background was cracking up.  Most of Sellers lines were improvised and Scott’s hilarious spill was done so well within character that Kubrick kept it in the film.  Another fun thing to look for is a young James Earl Jones, making his film debut.  Can you find him?

Dr. Strangelove is a movie everyone should see.  It’s clean enough for kids and everyone will have something to laugh at.  If you plan a party around it or turn it into a drinking game (I have heard some great stories) make sure you all stand up and sing along at the end.

“Gentlemen, you can’t fight in here! This is the War Room!”

***To pick one favorite from ’64 is not right.  Mary Poppins and Dr. Strangelove are so opposite and equally wonderful, what one lacks in the other brings forth.  I’d like to call it a tie.***

Anatomy of a Murder

Anatomy of a Murder is a courtroom drama staring James Stewart as lawyer Paul Biegler.  He’s defending Frederick Manion (Ben Gazzara) who killed a local bar tender who raped his wife.  They decide to use a plea innocent with a reasoning of temporary insanity.  When court opens, Biegler is up against two lawyers, including a celebrity prosecu

tor Claude Dancer (George C. Scott), and like a very boisterous chess game, they must outmaneuver each other in this courtroom battle.

With the striking visual credits, James Stewart and the ideas that come to mind with a word like Murder I was expecting something in a more Hitchcock fashion.  Though, it’s not likely you’ll be bored by this legal battle.  Stewart and Scott keep everything lively, fresh and loud.  They shout “Objection!” until it’s just second nature.  Watching the two lawyers saunter around each other is fun and a surprise comes up from time to time.  It’s not very suspenseful, but there’s no cut and dry winner until the very end.

Now, I have to bring up a brief bit of film history.  It’s only by Hitchcock’s passive-aggressive plan to keep Stewart out of his 1959 film, North by Northwest, that Stewart was even in Anatomy of a Murder.  You see, Stewart had starred in four of Hitchcock’s films since 1948, Rope, Rear Window, The Man Who Knew Too Much and in 1958, Vertigo.  Naturally, Stewart seemed to assume that Hitchcock wanted him to play the lead in North by Northwest, and was getting very excited about the role.  But, Hitchcock thought that Vertigo had done so poorly because Stewart was starting to look too old, and wanted Cary Grant as his next star.  Realizing the misunderstanding, Hitchcock delayed production until Stewart was committed to the role in Anatomy of a Murder and had to turn down Hitchcock.

James Stewart was one of the great actors in the Golden Age of Hollywood.  Now, I have not seen his Oscar winning performance in The Philadelphia Story yet, but as far as I’ve seen, Stewart plays Stewart in different roles.  By that, I mean he can act and well, he holds our attention and commands the screen like and expert, but he is the same character in every movie.  Stewart as a small time lawyer acts and talks the same as Stewart as a banged up photographer and as a man searching for his son.  That’s why he’s so popular, to this day.  You always know it’s him.

I believe Anatomy of a Murder was nominated because of its compelling story and fast paced courtroom scenes.  Some people will imagine courtroom scenes to be boring, with lawyers that drone and a jury that can’t keep their eyes open.  This is the opposite.  Both lawyers fire off like loose cannons every few minutes.  Their interrogations are very telling and can range from emotional to laugh out loud comical.

Watch Anatomy of a Murder if you are a James Stewart fan or just enjoy courtroom battles.

Also, if you’re a fan of George C. Scott, go back to my previous post.  I apologize,  I just got too wrapped up on other parts of the film to mention that he plays a great part in The Hustler as well.