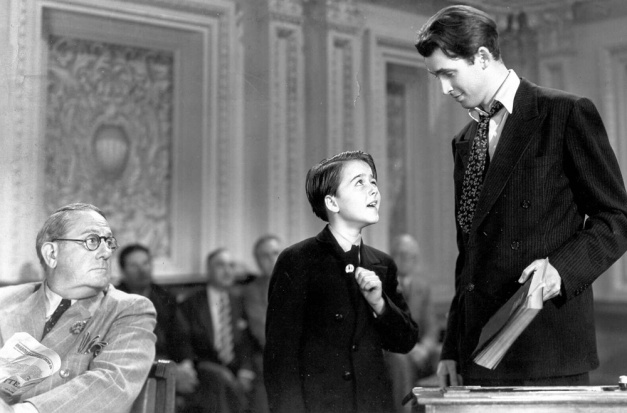 When a vacancy in the senate pops up, there is a mad dash to fill the seat with the right kind of person.  Under the thumb of James Taylor (Edward Arnold), the corrupt political boss, the governor looks for their new senator to be someone who won’t get in their way.  They find a young man who leads the Boy Rangers, Jefferson Smith (James Stewart), and send him off to Washington with the senior senator and friend of his late father, Joseph Paine (Claude Rains). 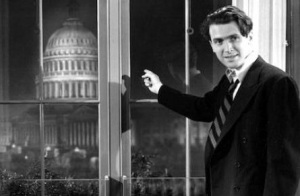 Once in Washington, Smith acts like a typical starry-eyed newcomer, wondering off to see all the monuments, fumbling with his hat around the pretty girls and naively thinking he can quickly make a difference with his new senate seat.  For Clarissa Saunders (Jean Arthur), Smith’s chief of staff, it’s almost too much to bear seeing such an innocent guy sent straight to the lions den without even realizing it.  She is well aware of the corruption going on between the men who hired Smith and has lost her faith in the government because of it.  But when Smith wants to propose a new bill for a National Boys Camp, he finds out about and sees how he could possibly take down the whole corrupt machine.  Saunders ends up coaching Smith and cheering him on as he does one of the craziest things that can happen on the senate floor, a filibuster. 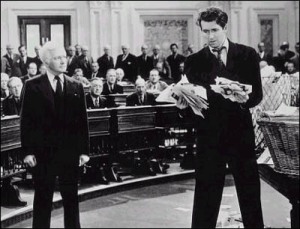 Stewart’s performance is just wonderful as the innocent Mr. Smith.  From the very beginning, when we hear the governor’s sons going on about Mr. Smith, we know he’s going to be a special kind of person.  The earnest way he is so amazed by all the monuments and history of Washington is cute and refreshing compared to all the bleak corruption around him.  Even if you find his innocent fascination goofy, we see that he’s very kind, especially to the boys who run errands on the senate floor.  I’d wear that Boy Ranger pin with pride.  And when it comes time for Smith to filibuster, which seems like a hopeless cause for quite a while, Stewart does a wonderful job making his long-winded bravery something to admire.

I first saw this film in high school US government class, my teacher thought it was perfect for illustrating some of the aspects of senate processes.  That one scene where Saunders explains the entire process that a bill goes through is quite educational, if you can keep up with her.  A filibuster isn’t something you see very often, but the film also explains the rules behind that as well.  We see that being a senator can be a crafty business, even if you’re not dealing with any corruption.

Mr. Smith Goes to Washington is a really great film that hold up well to a twenty-first century audience. I believe this is Frank Capra at his best and Stewart at his sweetest.  It’s smart, patriotic with honest values that doesn’t get too sweet or cute.  The balance is just right.

“All you people don’t know about lost causes.  Mr. Paine does.  He said once they were the only causes worth fighting for.”