Trader Horn is an adventure movie, shot mainly in the wilds of Africa.  It follows Aloysius ‘Trader’ Horn (Harry Carey) and his young assistant Peru (Duncan Renaldo).  When they happen upon the body of Edith Trent (Olive Carey), they decide to go on and finish her quest: to find the daughter she lost years ago.  Through many native and animal encounters, they find the girl, Nina (Edwina Booth), now queen of a particularly fierce tribe.

The focus of this film is split up between the animal footage, savage native scenes and later, longing looks between Peru and Nina.  For animal lovers, it is fun to see hippos bubbling up in the river and a whole herd of giraffes running across the plains, but it can get a little tougher to watch later.  While the native scenes are more fascinating, they are depicted mostly as wild savages.  I couldn’t help but notice how they hang intruding white men upside down on crosses, perhaps something they learned from missionaries?  Once we find Nina, who is an awkward white savage, complete with hunched shoulders and a brooding glare, things only feel more racist and extremely sexist. 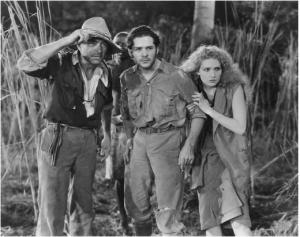 In Africa, the production of this film suffered so many problems.  An African crew member was killed by a crocodile, another by a charging rhino.  Most of the crew, including director W.S. Van Dyke contracted malaria.  In fact, it took Carey six years to recover from her dose of malaria and was forced into early retirement from acting.  She sued MGM over the ordeal.

The treatment of animals in Trader Horn was appalling.  To get around American animal cruelty laws, some scenes, including the lion attack scene, were filmed in Mexico.  Reportedly, the lions were starved in order to provoke a more savage attack.  In the film, it is hard to not notice how that majestic beast is all skin and bones.  I really hope the rhino scene was not as realistic as it seems.

Trader Horn is one of the most ambitious early talkies I have seen, but in it’s attempt to be great it has not turned out that way.  Where it fails in plot it makes up in unique footage of African wildlife.  Where the sound quality is terrible, it’s location, next to raging rivers and vast plains takes center stage.  It feels like a film that is both good and bad all at the same time.  Perhaps it gets better if a drinking game is made for it: every time Trader points out a new animal ought to do the trick.

While I honestly admire this film’s ambition, I feel that it could have been just as affective, if not more, as a silent film, providing that they keep the jungle drums as a musical choice.  The fact that a sound crew was sent to Africa half way through production suggests that it was originally going to be silent.  Sadly, that is history and hindsight now, but I imagine it would have felt like the last silent film George makes in The Artist, only with grand footage of Africa.

“Aye, that’s Africa for you.  When you’re not eating somebody you’re trying to keep somebody else from eating you.”