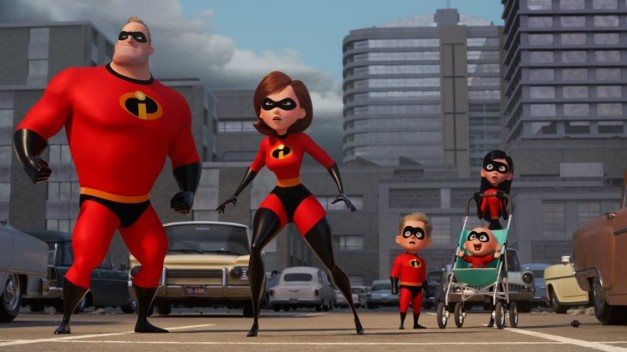 It’s been fourteen years since we first met Pixar’s family of superheroes, yet their story picks up from the moment the first film ended. It opens with the Parr family springing into action to stop The Underminer, while they juggle babysitting Jack Jack, and it ensures us that this film will be full of fun, family focused, fast paced action. 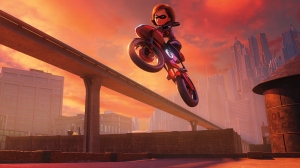 However, the day does does not end well for the Parrs, as superheroes are still illegal. The agent who has been helping them stay undercover for years can only offer them two weeks in a motel before they’re on their own. So when a wealthy, nostalgic benefactor hoping to make supers legal again offers Elastigirl a job, complete with a swanky high tech house for the family, the Parrs take it. Soon a new villain rises, targeting Elastigirl and could jeopardize the plan to legalize supers.

While Helen (Elastigirl voice by Holly Hunter) is off doing superhero work, Bob (Mr. Incredible voiced by Craig T. Nelson)  is holding down the fort taking care of the kids. His challenges add some engaging comedy to this family movie. In his first day he has to deal with his Violet’s first date, Dash’s math homework and a baby who won’t stay in his crib on top of being envious of his wife’s work. It only gets worse as Bob discovers Jack-Jack’s powers.

One of the funniest scenes shows Jack-Jack fighting his first enemy: a raccoon in the yard. Many of his powers are revealed as Jack-Jack moves through the glass door, morphs into his monster-baby form, bursts into flames throwing lawn chairs and splits into multiple clones, chasing off the hilariously bewildered raccoon. And when Bob finds him, the excitement about his baby’s new powers is soon met with the insurmountable task of keeping him safe. Thankfully, Edna is willing to help, in her own fabulous way.

This is a rare superhero movie that is family friendly and still satisfies all ages. I loved the way Elastigirl was allowed to shine on her own, as well as a few new female supers. My kid enjoyed the Jack-Jack scenes. And while my husband enjoyed it, he of course found flaws in how similar the plots of both the original and this sequel are, but I won’t spill any spoilers on that. And honestly, I didn’t mind, the stories themselves are unique enough. 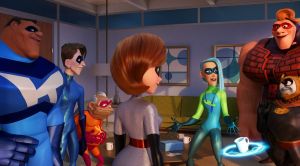 One thing I want to warn viewers about is the fact that the film uses a visual effect similar to a strobe light in multiple parts of the film. For those sensitive to such visuals, beware or wait to watch the film at home. It was pretty intense in a dark, crowded theater.

Through all the action and excitement, the heart of the film is the story of the Parr family. While their powers are super, their problems are wonderfully relatable for many modern families. The combination of stress and support between Bob and Helen when they switch household roles is something many families understand and the results are engaging and entertaining for all ages. And as always, these supers are stronger together. Everyone can leave this film seeing the supers within their own home. 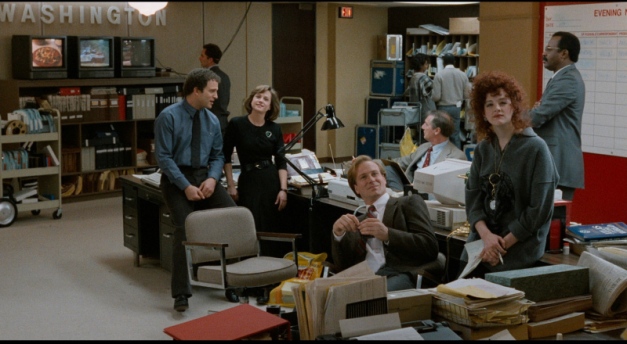 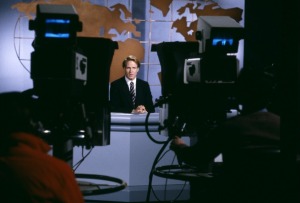 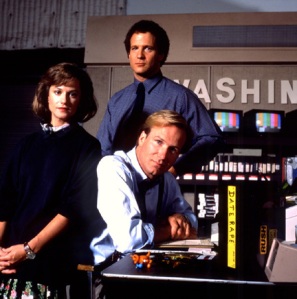 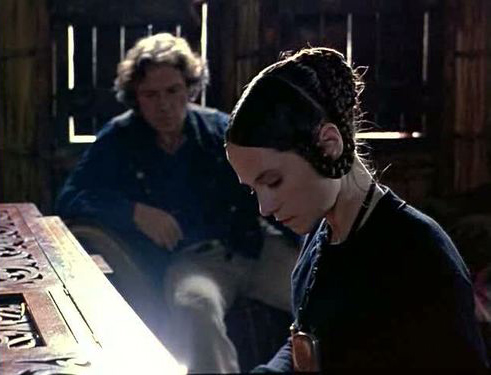 Ada (Holly Hunter) is a mute from Scotland in the 1850’s.  Her father has arranged for her to marry Alisdair Stewart (Sam Neil), a wealthy man in New Zealand.  After the long journey, she, her daughter Flora (Anna Paquin) and her piano wait on the rainy beach for Stewart.  It’s a long hike through muddy forest back to Stewart’s home, so the piano is left behind, against Flora voicing her mother’s protest.  Later, when Stewart sells the piano to a local laborer, George Baines (Harvey Keitel), Ada is heartbroken and rightfully angry, but can do nothing.  Baines makes a deal with Ada to earn the piano back by teaching him to play.  That’s what he wants people to think anyway.  He really wants Ada to play, for him, for herself.  It isn’t long before their “lessons” turn into a passionate affair. 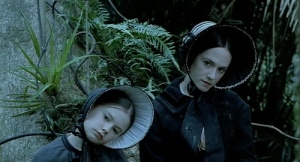 I find it fascinating to think about the relationships a mute woman can have.  Her main portal to express herself to the world is by playing the piano.  Ada and her daughter Flora communicate through sign language and many times Flora is speaking for her mother.  With Baines, a connection stems from listening to Ada play the piano, from there it turns sexual and intimate.  Then there is Stewart, the man Ada is supposed to have a relationship with, but he does not know how to listen to anyone, much less Ada.  She attempts to be intimate with Stewart, she is opening herself, but Stewart and his proper ways shut himself down.

There are more barriers present than the simple subject of being mute.  Stewart and his acquaintances are supposed to be higher class and try to maintain their stuffy, proper upbringing in the mud and rain of the New Zealand forest.  Meanwhile, we see the native people more relaxed about everything, from children’s odd games of embracing trees to sexual jokes.  As I understand it, that’s how Baines is freely able to become intimate with Ada and Stewart literally clinches his butt at one touch. 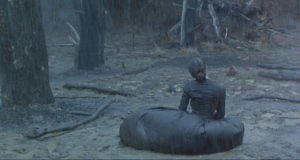 Writer and director Jane Campion tells this story with a subtle tone that I don’t think any male director could articulate like she does.  The relationships between Ada, Baines and Stewart could have been interpreted completely different from a male perspective.  Except possibly Flora, no characters have any ill motives and any wrong-doing was in passion.  The character of Baines is especially well crafted, one false move and he could have easily fallen from the one man who can understand Ada to just that creepy guy who walks around the piano naked for far too long.

Hunter and Paquin both won Oscars for their roles as mother and daughter.  For Hunter, she didn’t say a word (except in a distant voice-over), but instead her face, her actions the passion she can bring to the screen won the award.  On the other hand, young Paquin pulled off an amazingly beautiful Scottish accent for Flora and depicted a confused girl whose foolish cunning unknowingly causes tragedy wonderfully.

The Piano is a quietly haunting film full of sexual nature and other thought provoking themes.  I don’t imagine many men really enjoying this film, I doubt my husband would have made it past Keitel strolling nude around the piano.  However, I found it stirring, thoughtful, beautiful and well worth the watch.

“The strange thing is, I don’t think myself silent. That is because of my piano.”