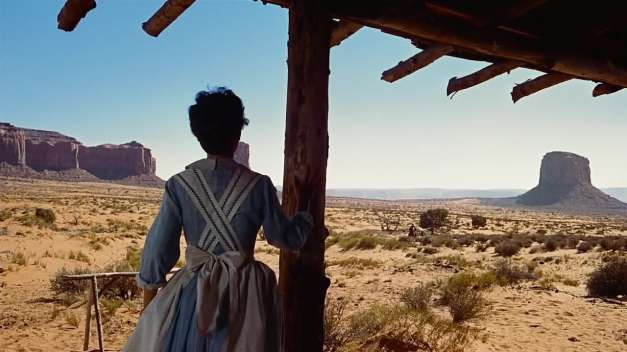 John Ford’s The Searchers is the classic western.  It has everything a western needs and more.  It’s set in the old west, under a beautiful blue sky and amazing red rock formations in the distance.  There are plenty of cowboys riding around, indians they can justify shooting, fights to get into, and a girl that needs saving.  And, of course, it stars John Wayne.

The year is 1868, and Ethan (Wayne) has just returned from the Civil War.  He hopes to settle in peacefully with his brother’s family, including his nephew Martin (Jeffrey Hunter), who is ⅛ indian.  Not long after his return, Comanche indians, led by Chief Scar, lure the men away from his family’s home and kill all but the youngest daughter, Debby.  Ethan leads a band of men to track down the tribe and bring the girl home, but it proves to be too dangerous.  The band falls to a duo, Ethan and stubborn young Martin.  As time goes on, Martin senses Ethan’s dark hatred of the Indians and fears for Debby, who has been living assimilated with the tribe during all their searching.

There’s an amusing side plot, involving a young woman, Laurie (Vera Miles), waiting for Martin.  She makes her feelings obvious and has had her heart set on him since they were small children.  But in true cowboy fashion, Martin is not as clear about his affections.  While he is out searching for Debby for years, he only sends one letter.  Poor Laurie may not wait forever for him, and who knows what kind of reputation Martin will return with, if he returns at all. 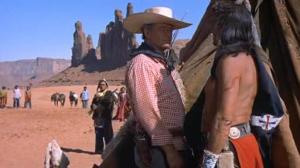 After the film was over, I felt a little dumbfounded.  There were dozens of questions racing through my mind.  What can possess two men to search for one girl for over five years?  Some interpret underlying secrets to fuel the searching; could Debby be Ethan’s daughter?  Ethan has some extreme hatred toward the Indians that comes up before the murders and kidnapping, where did that come from?  Is that connected to why it took him three years to return from the war?  There seem to be half-hints along the way to a couple of these questions, but nothing to satisfy any real answers.

I’d also like to discuss my dissatisfaction with the ending, so here’s your spoiler alert, skip this paragraph.  In one scene, didn’t Debby say she wanted to stay with the Indians?  She even went as far as to call them her people.  So what was with the sudden willingness to leave with Martin?  And Ethan was ready to kill her when she refused to go earlier, he knew nothing of her sudden change of heart, how convenient that he has one too.

Now, don’t let my hang-ups on the plot/writing bring down the film.  I was actually very impressed and happy to have finally seen it.  The cinematography is splendid, making great use of the beautiful Monument Valley.  The framing of the beginning and end shots were much appreciated.  There were perfect moments where a beautiful shot, a swell of music really brought an impact on an important moment in the story.  Both Hunter and Wayne put on a great performance that I could take seriously and become very involved in both of their characters.  There is a good amount of action, as well as laughs and drama.  The Searchers really is a great classic western that I have waited too long to see, and suggest everyone check it out.

“Injun will chase a thing till he thinks he’s chased it enough.  Then he quits.  Same way when he runs.  Seems like he never learns there’s such a thing as a critter that’ll just keep comin’ on.”

Set during the Civil War, Dances with Wolves tells the story of a Union soldier, John Dunbar (Kevin Costner), who through his own suicide attempt aided the army to win a battle, and upon promotion, requested to be stationed at a post on the edge of the frontier.  Utterly alone there, where he hopes to see herds of wild buffalo and Indians he befriends a wolf he calls Two-Socks and becomes accepted by an entire tribe of Sioux Indians.

From the moment John rides his horse across the battlefield, arms to the heavens just asking to die, we know he’s not like the other soldiers.  I don’t think he gives two cents about the war.  The fact that he wants to be out in the frontier alone, to witness it before it is gone and overrun by the white men, shows a respect for nature that his peers don’t have.  He writes with a more intelligent and insightful tone than I would expect from any average Joe from the Civil War era.  He’s one of the few men of his time who could befriend and understand the Sioux. 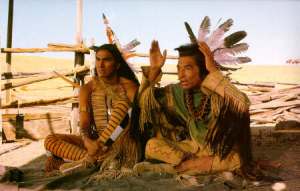 Though John has an obvious lone wolf mentality, he still has a need for human connection that drives him to seek friendship with the Sioux.  The moment where he has Kicking Bird (Graham Greene) and Wind In His Hair (Rodney A. Grant) at his place and tries to ask about the buffalo is amazing.  John gets on his knees, puts his hands to his head to represent horns and tries to mimic a buffalo’s movement.  Wind in his Hair, the warrior, just dismisses John as crazy and wants to go, but Kicking Bird, a holy man, is more curious and tries to communicate.

A moment like that hardly ever happen often today, we don’t try to understand one another, or we just don’t have the need.  The closest I’ve come to such a moment was being lost in a German city and asking an old man on a bench for directions.  I didn’t speak German and he didn’t speak English, but we both knew just enough Spanish to help me find my way.  Today, I would just pull up the GPS on my phone and deny myself a meaningful human interaction. 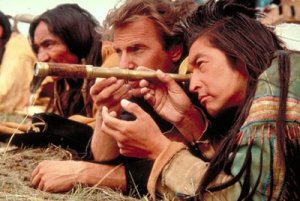 Thankfully, the tribe has a way to get past the language barrier quickly.  At a young age, a white woman, Stands With A Fist (Mary McDonnell) was adopted by Kicking Bird and can still speak English.  Reluctantly, she helps translate John’s English, revealing to Kicking Bird how insightful and friendly John is compared to other white men.  As the bond between John and the tribe grows, Stands With A Fist teaches him to speak the Sioux language, they fall in love and become a married couple within the Sioux tribe.  Unfortunately, John is still a Union soldier and when men find that he has “turned injun,” he and the whole tribe are seen as a traitorous threat.

Of the seven Oscars the film won, the Cinematography of Dances with Wolves is what completely blew me away.  I don’t think I could have even imagined the rolling hills and plains of the west looking this majestic.  There are beautiful images of wind whipping through the tall prairie grass, the mountains far in the distance and the lake still enough too see a perfect reflection of horses on the other side.  It’s just amazing to see such natural beauty of the few places left in the American frontier captured so well.  And the buffalo scenes make your eyes grow wide and still your breath.

Dances with Wolves is one of those films everyone should see at some point.  This film is especially important to the few who know we have Native American ancestors.  It does not only preserve a culture and time that is now gone because of the narrow minded ambition of men, but teaches us about embracing, learning from and accepting people different from you.

“I was just thinking that of all the trails in this life, there are some that matter most.  It is the trail of a true human being.  I think you are on this trail, and it is good to see.”

How the West Was Won

Do kids still play Cowboys and Indians today?  I’m guessing that game was at it’s peak around the early sixties with the abundance of Westerns in theaters throughout the fifties.  From what I remember, the game was basically the Indians making a bunch of noise and throwing pretend arrows or tomahawks at the cowboys who would eventually win by shooting the Indians with their pistols.  It was assumed, unless I decided to argue some history and yell, “Custer’s Last Stand!” that the cowboys were the good guys and would always win.  There are so many more interesting old west situations for kids to think up, maybe after seeing How the West Was Won kids became a little more creative with their games.

The story, narrated by Spencer Tracy, follows the Prescott family through fifty years in the old west.  Around the 1830’s the family sets westward on the Erie Canal and loses the mother and father when their raft gets into rapids.  From there, sisters Eve (Carroll Baker) and Lilly (Debbie Reynolds) split.  Eve marries Linus (James Stewart), a mountain man who has helped the family along the river, and sets up a farm where their parents are buried.  Meanwhile, Lilly continues westward, eventually landing in California to make and lose a fortune during the Gold Rush.  The Civil War brings tough choices to Eve and her boys.  Later, her son Zeb (George Peppard) becomes a Marshal trying to keep peace between the Indians and the men building a railroad right through their hunting grounds.

This film tries to be as big as all of the old west.  There’s pioneers, mountain men, cowboys, Indians, wagon trains, the Civil War, the Gold Rush, train bandits and a buffalo stampede.  Problem is it just feels like Hollywood just trying to make the biggest western ever and teach some history.  I don’t think they taught it too well, but giving John Wayne the role of General William Tecumseh Sherman will keep the kids from getting bored with their learning. 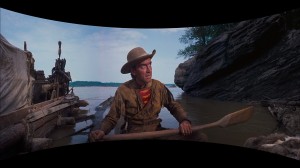 You might notice that the whole film looks like a panoramic postcard that got folded into thirds.  That’s because this is a Cinerama film, which was to be shown specifically at a Cinerama theater.  It was where three 35mm reels simultaneously projected onto a curved screen, like a non-digital IMAX of the 50s and 60s.  I’m sure it was a sight to see back then, but consequently, on all other mediums save for their specific screens there is that annoying “crease” where the separate films meet.  It’s a great idea, I was rather impressed reading about this idea, but the crease does take some getting used to.

I must say that the buffalo stampede is an amazing scene.  You will not believe how many buffalo are running around, I was completely gobsmacked.  And the angles of this captured on film are so daring, I wondered how many of their cameras were just trampled.  If epic westerns or stories of old western history don’t catch your attention, just skip straight to the stampede scene, crank up the stereo and watch it over and over.  It’s by far the best part of the film.

“This land has a name today, and is marked on maps. But, the names and the marks and the maps all had to be won, won from nature and from primitive man.”