Midnight Express is based on a true story about Billy Hayes (Brad Davis), a man who in 1970 was arrested in Turkey for attempted drug smuggling and made into a harsh example in a Turkish prison.  After being caught trying to board an airplane with two kilos of hashish strapped to his body, he is given the chance to be released if he identifies the person who sold him the drugs.  Rather stupidly, Billy tries to make a run for it in the streets, but is just recaptured and given a harsh prison sentence.  The Turkish prison is brutal, full of sadistic guards who make foreigners a priority for mental and physical torture.  As Billy’s family, lawyer and the American government work hard on the outside to find a way to get him released, the Turkish government decide to make an example out of Billy and raise his sentence to thirty years, when he only had about fifty days left. 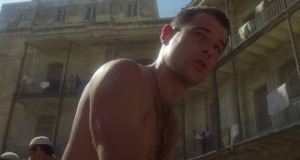 Within the prison walls, Billy makes a few friends who teach him about the system.  There’s Jimmy (Randy Quaid), a hotheaded American who stole candles from a church, Erich (Norbert Weisser), a Swedish pacifist.  While Jimmy is bent on finding a way to escape, Erich is much more laid back, and eventually Erich and Billy begin a homosexual relationship.  Later, Billy meets Max (John Hurt) who in his crazy well tells Billy that the only way out of here is to catch the Midnight Express, which means escape.

Director Alan Parker opens Midnight Express with an intense and thrilling scene.  Billy, is about to attempt to smuggle drugs on a flight out of Turkey.  We watch him methodically pack and tape packs of hashish to his body.  Before we even see his face, we hear his heartbeat, a first indicator of the tension.  As he and his girlfriend, Susan (Irene Miracle), get closer to the plane, we sense Billy’s nervousness in multiple ways.  He runs off to the restroom to splash his face with water, take some quick breaths and check that his stash is secure.  The terminal is heavily guarded.  As his bag is being checked, the heartbeat soundtrack intensifies and we see sweat on Billy’s face.  Once he has passed bag inspection, Billy seems to think he has made it and has a new spring in his step next to Susan.  But that is short lived when he sees military personnel surrounding the plane.  He tries to play dumb until the last minute, when someone finally pats him down right outside the plane and the hash is discovered.

The whole smuggling scene is masterfully done.  Everything is shown to us and we have to figure out exactly what’s going on, rather than blatantly be told and narrated to.  And the tension build up is perfect, pitting us at the edge of our seats within the first few minutes of the film.  If you’re lucky, you’ll find yourself sweating with Billly.

Compared to this wonderful opening build up, the rest of the film can feel like a well structured, light torture film.  It is not a torture film, but that suspenseful edge seems to be lost once Billy is thrown in prison and is stripped of any real power.  The conditions in this Turkish prison are brutal and the beatings are worse.  On Billy’s first night behind bars, he sneaks himself a blanket and is strung up by his feet and they are beaten as punishment.  It’s terrible, I was afraid he would be crippled before one full day.  These sort of brutal, sadistic punishments happen all the time in this prison, even to children.  Soon, our hero, Billy, is also dealing out some gruesome punishment, enough to get him tossed in the criminally insane ward.  The scene there, where the men just walk in a circle can feel like The Snake Pit on Turkish steroids.  Unless you’re the kind who can laugh and munch popcorn during movies like Saw or Hostel, Midnight Express is going to make you wince.

“Everyone runs around stabbing everyone else in the ass. That’s what they call Turkish revenge. I know it must all sound crazy to you, but this place is crazy. ”