The Secret of Kells

One of the most unique animated features in the digital animation era is The Secret of Kells.  Made by the Irish film studio, Cartoon Saloon, it tells a fictional story about the origin of the Book of Kells.  The Book of Kells is one of the most prized artifacts of early Irish history, dating back to the 800s.  It contains the gospels, elaborately illustrated like nothing ever seen before or since.

The visual style of the film is wonderfully derived from the Book of Kell’s illustrations.  There are beautiful symmetrical patterns, thick continuous lines and a variety of textures covering every bit of the screen.  It may sound like chaos in words, but it is absolutely beautiful on screen.  It looks like a wonderful blend of classic hand drawn animation, maybe even some water color textures, yet moves and feels smooth like digital renderings.  All the creativity and attention to every detail in this small budget film puts big animation studios to shame. 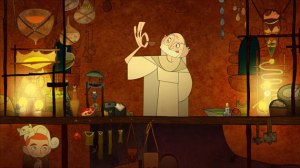 The story is that of a young orphan boy, Brendan (Evan McGuire), who lives with his uncle, Abbot Cellach (Brendan Gleeson).  The Abbot is a stern, hard working and quiet man who strives to keep Kells safe from the vikings who have been devastating the land all around.  To ensure Kells’ safety, a huge wall is being built around the city, and the Abbot lives in the center of Kells, in a tower tall enough to look over the wall.  When Brendan gets word that an old man, Brother Aiden (Mick Lally), is arriving to work on a book claimed to be so amazing it can turn sinners blind, he can’t resist a peek.  But it is blank.  Soon, to help create the legendary book, Brendan is recruited by Aiden to find berries for ink in the forest.  This means disobeying his uncle and sneaking out of Kells protective walls.  In the forest he meets Aisling (Christen Mooney), who helps him along the way.  But with the vikings drawing nearer, will the book and Brendan be safe?

While I loved the entire film, the scenes in the forest were my favorite.  Here, things become a little less rigid and much more organic, but still keeps to the overall style of the film.  More curves and water colors are used and less patterns and straight lines.  And Aisling (the only female character in the film) is a wonderful mixture of mythical, wise and wild, dashing up trees and cowering in the ancient ruins.

What I find very interesting is mixture of dogmas within the film, with no tension.  It isn’t said that the book will contain the gospel, but that it could make sinners blind.  We aren’t told exactly what Aisling is, but she is a deity of ancient Irish mythology.  And while we told that the Abbot fears pagans (which we assume the vikings, who only destroy, are), Aisling is a force of good.  Not many modern films can bring so many sides of history, legend and mythology together so cleanly and not receive any backlash.

I have to recommend The Secret of Kells to everyone.  Never before have I seen such unique animation!  There’s nothing for little ones to be afraid of, except possibly the vikings.  And I know some may not feel compelled to seek out an Irish film about Irish legends and mythology, but it really is wonderful and something fun to learn about.  Besides, it’s on Netflix instant right now and only 75 minutes long.

“Wait until you see the rest of my forest.”