Based off the second half of John Steinbeck’s novel and directed by Elia Kazan, East of Eden is a retelling of Cain and Abel set around the beginning of World War I.  The biblical references are easy to notice; Cal and Aron are sons of Adam, competing for their father’s love.  What is surprising, and rather fitting, is where Eve plays in this scheme.

Cal (James Dean) believes that he and his twin brother Aron (Richard Davalos) are opposites, good and bad.  Aron is the obvious good one, always winning his father’s love and going steady with a sweet girl, Abra (Julie Harris).  Cal is self loathing and fixated on the bad he sees in himself.  His father, Adam (Raymond Massey), is the most well loved, righteous Christian men in town.  Cal concludes that all the bad within him must have come from his mother, who died after giving birth, so he and Aron were told.  In his troubled wanderings, Cal finds a businesswoman (Jo Van Fleet), who he finds far too much in common with.  His yearning to find where he comes from and win his father’s approval may destroy his family.

Dean portrays a troubled teen perfectly, with plenty of passion and no cliche.  He shows curiosity, confusion and self loathing in a way that helps us connect with Cal.  He turns Cal into a very sympathetic character, always bringing the audience in, even when it feels like he is pushing away from everything.  He brings the pain of feeling unloved by his father to a heartbreaking climax.  It’s a role Dean similar to his later film, Rebel Without a Cause, yet Dean not at all the same.  Sadly, East of Eden was Dean’s only major film released before his death.  His nomination for best lead actor was the Academy’s first posthumous nomination.

Along with Dean’s Oscar nomination were three others for East of Eden.  Elia Kazan was nominated for best director and Paul Osborn for best adapted screenplay.  Jo Van Fleet won the award for best supporting actress in her role as the secretive business woman who turns out to have quite an impact on Cal’s life.

East of Eden is an essential film of the 1950s.  To think that it lost a best picture nomination to Picnic saddens me.  The story is compelling and thought provoking.  The acting is riveting and the cast works beautifully together.  Kazan’s direction is at the same amazing level as his best picture nominated films.  When discussing James Dean, it’s a shame not to mention his performance here.

“Man has a choice and it’s a choice that makes him a man.”

Third generation cattle rancher Bick Benedict (Rock Hudson) visits Maryland in the 1920’s to buy a prized horse and leaves with a wife as well.  Within two days Leslie (Elizabeth Taylor) falls all over Bick and his big Texas ideals, though she’s an independent minded woman.  The wide open opportunities of Texas seem romantic to Leslie, and having a wealthy rancher on her arm is a good idea.

But once they’ve arrived at a huge house in the middle of dusty nowhere, Bick expects Leslie to up and change instantly: “You’re a Texan now.  You’re a Benedict now.”  Oh, it’s going to be a daily struggle for a smart Eastern girl in Texas.  Between the racism against Mexicans and blatant sexism the big ranching men constantly spew, Leslie’s got to change a few things around here somehow. 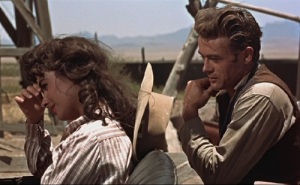 Soon Leslie meets Jett Rink (James Dean), the young poor cowboy looking for a way out of Texas and all it’s poor islolation.  When he’s left a piece of land, suddenly Jett is busting with pride and has something to show for himself.  He works hard to make an oil well and eventually strikes it rich.  Later, Bick and his children have to deal with Jett, the oil tycoon.

So yes, Bick and Leslie have three children, a boy and two girls.  Bick plans on giving his ranch to his son, just as his father and grandfather did, but even at an early age the boy doesn’t want anything to do with ranching.  He’d rather be a doctor and work alongside a Mexican.  Of course, Leslie encourages her son and Bick feels like generations of his family’s work are being undone.

Let’s break this down into the one reason to see this movie: James Dean.  Though he’s just a minor character, he steals the show.  And he’s the one person we want to identify with from the start; he’s young, poor, very cool and dreams of something more.  As his role progresses to an aging oil tycoon, Dean’s performance only gets better.  This was also Dean’s final role, before the film was even out of production, he was killed in a car crash.

Sadly, Giant is just a long boring film about this Texas family and the change from one generation to another.  The sexism theme is not strong enough to hold any weight here, mostly because I couldn’t believe that a real independently minded woman (in the 1920’s or otherwise) would just marry some rich and ignorant guy that showed up at her daddy’s house within two days.  Argue with me if you want, Leslie is a terrible character from the start.

Sigh, let’s end this on a better note.  James Dean everyone:

“I’m rich, Bick. I’m a rich ‘un. I’m a rich boy. Me, I’m gonna have more money than you ever thought you could have — you and all the rest of you stinkin’ sons of … Benedicts!”