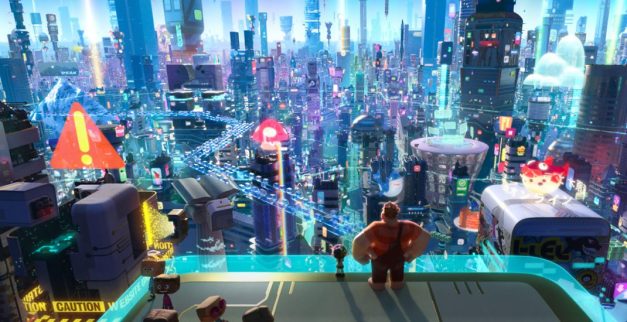 These days, most people with access to a movie theater use, rely and basically live on the internet. I know I do. And you wouldn’t be reading this without it. However, a lot of children have a much more limited access to all that is out there on the internet and you may be wondering how in the world could Disney make a film that engages kids when it is about and takes place in the internet. But, come on, it’s Disney. They figured that out. 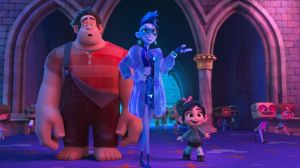 In this sequel, Vanellope (voice by Sarah Silverman) has lost interest in her game world, so like a good friend, Ralph (voiced by John C. Reilly) tries to help by making her a new track. But like everything Ralph does, it’s a wreck that ends with the arcade game’s steering wheel broken. With no wheel, the game gets unplugged and all the characters from Sugar Rush are homeless. To try to save Sugar Rush, Ralph and Vanellope venture into the newly plugged in wi-fi and venture across the internet in search of a replacement steering wheel on Ebay. After winning the auction, they hit a snag realizing they need money (not just the big number they shouted out). They embark on a quest trying to earn money playing video games in racing game spliced with Grand Theft Auto, Slaughter Race, where they make a strong ally and decide to make money by getting likes on the Disney fictional brand of YouTube. Along the way, Ralph and Vanellope question their friendship and… you guess it, Ralph breaks the whole internet.

I took my four year old son to see the movie and was curious how he would react to it. His knowledge of the internet is limited to the few cute videos and Facebook posts I show him, so basically nothing. Yes, many jokes sailed over his head. But when I asked him about the story, he understood it as well as a kid his age could. He described YouTube-land as “the place where people give hearts to videos” and OhMyDisney as “Disney World”.

And that’s what I think makes this film work so well. The creatives at Disney took the vast, complicated, completely 2D idea of the internet and turned it into a tangible world that kids can watch their favorite characters interact with in a way we cannot. Every user has a little square headed avatar running around and they can travel to different sites, view Instagram posts or Pinterest boards like an art gallery and even be distracted by pop-ups. The top layer looks like a vast, bright city with towering skyscrapers for the big sites like Google. Best of all, there’s the seedy lower level of the internet, full of spam, the dark web to buy viruses and crumbling buildings boasting dial up connection. The creative team here has thought of it all and kept it delightfully PG.

Since the trailer dropped, everyone has been waiting for the big princesses scene. Vanellope, unaware that she herself is a technically a Disney princess, glitches her way into where they all hang out. It’s fun to see so many classic and loved characters all together and their individual personalities shine in this little bit. Best of all, meeting the princesses helps propel Vanellope on her character arc. It’s not just a cute gimmick for little girls, it actually moves the story forward, and I expect nothing less from Disney these days.

Overall, Ralph Breaks the Internet is a fun, fast paced, visually inspired family film. It’s story about evolving friendship is unique and sweet, just like the characters it revolves around. Now give this post a few likes, shares and get breaking the internet. And I suggest staying after the credits for a good laugh.

Disney’s latest animated film, Wreck-It Ralph, is made for those who have grown up witnessing an evolution in video games.  It’s the first animated feature in years that my husband was more excited about than I was.  I must admit, from the trailers I wasn’t sure how well the story or characters would hold up when so many video game characters from across the different platforms and generations all make an appearance.  Thankfully, Sonic, Bowser, Clyde and other familiar game characters are only fun cameo appearances and are not our heroes 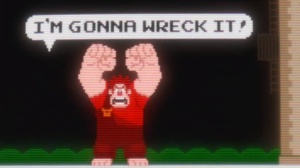 In an arcade that has been around for at least thirty years, Fix-It Felix Jr. is a classic that keeps the quarters coming. But our story takes place inside the games, where Ralph (voice by John C. Riley) is tired of only being seen a a bad guy.  His job is to wreck the building while the player controls Felix (Jack McBrayer), who fixes what Ralph wrecks as fast as possible.  As the rest of the game’s characters are busy celebrating thirty years of playing, Ralph is left out to be alone in his dump, as always.  His attempt to join the party only ends in what he’s best at, wrecking it.  Pointing out all the medals Felix has won, one of the characters bets Ralph that if he can win a medal, he can live in the penthouse.

This sends Ralph out on a quest, game jumping, or “going Turbo”, into Hero’s Duty, a high-tech first-person shooter, then accidentally into Sugar Rush, a sweet-treat themed racing game.  Without Ralph, Fix-It Felix Jr. doesn’t work and is at risk for getting their plug pulled.  That would land everyone in the game homeless, like poor Q*bert and his whole gang who beg in Game Central Station, which has a lot of bustling action for a power-strip.

Throughout the film we meet some fun new characters.  Sergeant Calhoun (Jane Lynch) is a hard-core, no-nonsense fighter in Hero’s Duty and later becomes the object of Felix’s affections, as they search for Ralph.  In Sugar Rush, there is Vanellope (Sarah Silverman), a spunky glitchy wanna-be racer who has always been counted out, but might have a shot with Ralph’s help.  But that will never happen if King Candy (Alan Tudyk) has anything to do with it.

As I watched Wreck-It Ralph in a packed theater, I noticed some of the jokes often fell to one side.  At the frequent use of the word ‘duty’ and all its meanings, the kids roared repeatedly.  When classic video game references came up, I could hear the adults in the theater enjoying the joke, while most of the children were lost.  At one of the biggest laughs (I won’t spoil it, but it’s a Wizard of Oz reference), the little girl sitting next to me had one of those he-who-laughs-last-clearly-didn’t-get-the-joke moments.

Like I said, Wreck-It Ralph is made for those who have seen an arcade outside of Chuck E. Cheese.  We recognize Fix-It Felix Jr. as a play on the original Donkey Kong, remember the Konami code and stay for the Pac-Man glitch at the very end.  Kids will enjoy the film too, the new characters are made to include them, but so many hidden features will blow right over their heads.  However, there is still a big heart and a story of accepting yourself as you are and something about the pixels being brighter in another game that everyone will love.  The film is fun, colorful, has an engaging plot and uses all worlds of video gaming well.  It deserves the Oscar nomination for best animated feature.

We Need to Talk About Kevin

We Need to Talk About Kevin follows a mother as she meekly tries to get on with her life after an incident.  While we watch her struggle, she remembers raising her son, Kevin.

Only from seeing previews, posters and vague descriptions of the film, I thought I had a clear idea what this incident was.  You might too, but I’m not one to give it away.  You may be surprised.  And Kevin would hate it if I ruined any surprises.

The mother, Eva, is portrayed by Tilda Swinton.  I believe this is her greatest role, to date.  She makes Eva both a sympathetic character, but also very flawed.  The life she’s living, doesn’t seem to be the one she wants; married, with children in a big suburban house does not fit her.  She is stuck in constant resentment.  We understand her struggles with Kevin, but can’t always be on her side.  She is tense and intense as a mother, and after the incident, seems to have become a scared, meek shell of a woman.  The whole film is from her perspective, she bears the truths about Kevin like a reluctant Atlas, and even in her weakest, most destroyed moments has some unimaginable strength.

In flashbacks before her son is born, Eva is so full of life and energy.  She’s happy.  When Kevin is a baby, she seems frazzled, in over her head, and possibly suffering from post-partnum depression.  The fact that he always seems to be crying around her, but fine with his father, Frankin (John C. Reilly,) doesn’t help the situation.  As years pass, Eva tries to teach and connect with Kevin, but he’s stubborn and defiant even as a young toddler.  This only gets worse as he grows and it causes more clashes between mother and son.  When Kevin is a teenager (played by Erza Miller), it seems that Eva sees more potential in him.  She makes more of an effort to spend time with Kevin, but he coldly throws these moments of bonding into her face. 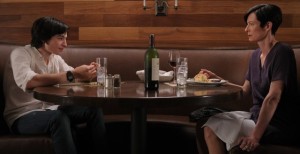 This film could bring up countless debates whether Kevin is the product of nature or nurture.  From the disturbing opening images of Eva in a tomato festival that looks more like a blood orgy, I got the idea that Kevin’s conception, or Eva as a whole, was somehow tainted.  Even at his youngest stages, Kevin seems full of hate and defiance, all directed only at his mother.  Though his mother tries to teach him, he doesn’t talk for a very long time.  The fact that Eva holds some resentment toward her son all his life does not bode well for nurture.  She tells him as a baby, “Mommy was happy before little Kevin came along.”  And the incident that finally potty-trains Kevin is downright child abuse.  I stand undecided.

We Need to Talk About Kevin can be a tough film to watch.  It certainly is not a feel good film.  In fact, some may see it as a parent’s worst nightmare.  However, it is very smart, both in script and how images in the present bring up memories of the past.  It does a great job of keeping everything connected and flowing naturally into a narrative, that could otherwise get confusing.  And Swinton leads the film with a startling, raw and powerful performance, I found Oscar worthy.

“Me and Kevin were playing Christmas kidnapping!”