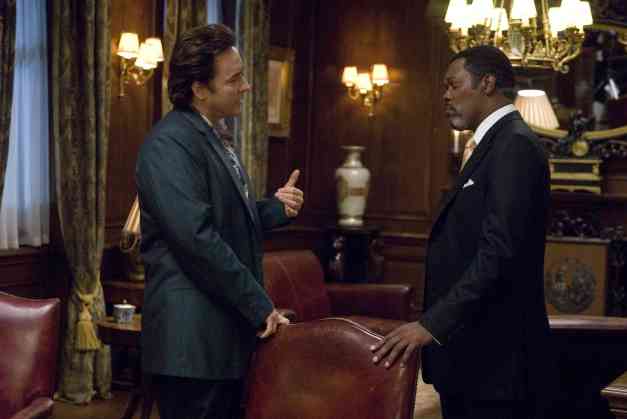 One of my favorite horror films of the past decade is 1408.  It was released in the summer of 2007, my last summer working at a movie theater.  My brother and I had to go see it and couldn’t stop talking about it for weeks.  Not many movies grace my DVD shelf, but 1408 is one of the most recent films that I proudly own and I love to bring it out at least once every October.

Based on a short story by Stephen King, 1408 is about a fiercely haunted hotel room.  Mike Enslin (John Cusack) is a writer who investigates supposedly haunted places and writes about them under cheesy titles like 10 Haunted Hotels.  One day, he gets a mysterious postcard from the Dolphin Hotel in New York with the warning “Don’t go in 1408.”  He takes the warning as a reader’s request and makes sure he can spend the night in the room.  Mike has been to countless haunted hotels, houses, graveyards and whatnot without experiencing a thing, why should he be scared of some hotel room?

The Dolphin’s manager, Mr. Olin (Samuel L. Jackson),  is a force to be reckoned with and makes a strong case for Mike to stay away.  Though Mike has done research and knows about many gruesome suicides in 1408, Olin enlightens him about the equally disturbing natural deaths.  The room has such a ghastly history that even Mike is a little surprised, but heeds no warning.

Inside room 1408, the evil that haunts it stays back just long enough for Mike to get complacent.  Once the surprises start, they just keep coming and escalate quickly.  Little tricks that Mike believes are Olin and his staff soon become indisputable, maddening horror.  Among the frightful fun is a phantom hammer swinging maniac, a drastically changing thermostat, bleeding cracks in the wall and painful visions from Mike’s past.  What comes through the fax machine always gives me the most heartbreaking creeps. 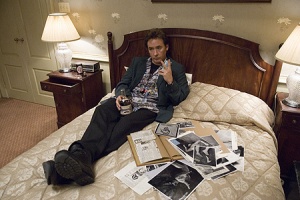 Mike has become one of my favorite horror film characters, partially because he runs the show so well and because I find him so easy to identify with.  He is a disillusioned hack writer running from a painful past.  His novel proves that he has talent, but he settles for this bogus gig writing about haunted places and traveling.  His job sounds both like a dream and nightmare to me.  What I love most about Mike is his high level of cynicism and snark that shields him from both the real and imaginary haunts he faces.   When there is no denying the evil of 1408, his true nature is shown.  Between his paranoia, futile escape attempts and painful sorrow, Mike reveals his vulnerability which becomes surprisingly refreshing and honest, for a hack writer.

I could go on all day about how much I love 1408.  It’s gruesome without much gore, scary without relying on jumpy moments, and a one man show that stays fresh.  The layers of terror that unfold get better and more intense throughout the film.  At times, it is maddening and brings us along Mike’s ride so well that we experience his torturous journey.  Best of all, it is full of surprises up to the very end.

“Do you know why I can stay in your spooky old room, Mr. Olin?  Because I know that ghoulies and ghosties and long-legged beasties… don’t exist.  And even if they did, there’s no God to protect us from them, now is there?”

I first saw Being John Malkovich for a film class in college.  This was supposed to help us focus on the aspects of acting.  Before this film, I guess I saw acting as a simple thing.  Get in costume, say some lines, make it sound convincing, right?  No way.  The ideas the film presents about being inside someone else, slowly taking them over and the relationship between puppet and puppeteer fueled a very zen-like discussion in class which we related to the art of acting.  The film alone was a head-trip, the discussion was like, far out man.  Sometimes I miss my hippie classmates.

The story is wonderfully far-fetched.  An out of work puppeteer, Craig (John Cusack), finds a job as a filing clerk.  The company, that seems its only function is to file papers, is located on the 7 ½ floor of an office building.  As in, half way between two floors, and half the height, causing everyone to stoop over when standing.  Behind a filing cabinet, Craig finds a tunnel in the wall, crawls in, is transported inside John Malkovich for about fifteen minutes and then is spit out on the side of the New Jersey Turnpike.

The characters are just as strange as the setup.  Craig has all his aspirations wrapped up in being a famous puppeteer, with looks odd enough to match.  His greasy, unkept beard and ponytail combination would deter most respectable job offers.  His wife, Lotte (Cameron Diaz), looks just as odd, but brings a friendlier charisma to herself.  She keeps several animals in their small apartment, most of them suffering from some form of mental trauma.  At work, Craig meets Maxine (Catherine Keener), a calculating woman who knows she is beautiful and uses her looks to toy with people.  While Craig tries to win over Maxine, who pushes him into turning the Malkovich portal into a  quick business, Lotte discovers her attraction to Maxine while she is inside Malkovich.

This may sound like a lot of confusing  paradoxes, but the film has a way of presenting them so smoothly.  The love triangle (or square really, since Malkovich becomes the link bringing Lotte and Maxine together) does not become an overpowering force.  The relationships between the characters needs the portal and uses Malkovich for his body and later his power and fame.  The ideas between puppetry, acting and the role of poor Malkovich are easily linked.

Being John Malkovich is so smart and out there, not one thing in this film is normal.  Yet, we accept it all and want more.  We happily enjoy that there is a floor 7 ½ made for the love of a midget woman with a portal into John Malkovich behind a file cabinet.  We love accepting all these crazy things and the odd people.  That is what makes this film worthy of my Oscar-Snub series.

While this film is smart, witty, well written and a ton of fun, I think it had one major flaw to keep it out of the Best Picture category.  No matter how many times I see this film, the cinematography irks me.  During my first screening, I honestly thought something was wrong with the projection system, the image was so dingy.  It’s a little odd to find so much gray in this film’s palette when the story is so colorful.

Still, the fact that there is so much going on in this film, in terms of ideas, plot twists and endless surprises is priceless.  At times, there can be a huge mix of emotions all at once.  In my favorite scene (one of the best comedic scenes of the 90’s), where Malkovich has entered his own portal to be in a world where everyone and everything is himself, I laugh until I cry and become very disturb all at the same time.  What a hilarious nightmare.

“I have seen a world that no man should see!”