Night of the Living Dead

The first time I watched Night of the Living Dead was Halloween night when I was thirteen years old.  I had spent the evening trick-or-treating with my friends and had quite the candy haul.  After a little trading with my siblings, it was my main source of energy as I stayed up waiting for the movie to begin at midnight.  My parents decided to stay up with me, but feel asleep on the couch before it even started.  Our local horror movie host, Sammy Terry and his pet spider George, did a quick introduction for the movie, which was rare for my time.  My parents have better memories of him.  The next hour and a half of my young life was a pure terror sugar rush.  When it was over, my parents shuffled me to bed but I couldn’t sleep.  I spent most of the night wide awake in terror or tossing due to too much candy.  What a great Halloween.

This is the original story of zombie survival.  While visiting a cemetery, Barbara (Judith O’Dea) and her brother, Johnny (Russell Streiner) are attacked by a strangely violent person.  As Barbara escapes, more and more dead looking people appear and she seeks shelter in an old farm house.  Soon, it’s surrounded, but she isn’t alone.  In the cellar are a young couple and a family with a sick child.  Then Ben (Duane Jones) bursts in and leads the group, barricading the doors and windows and getting new information over the television and radio.  Together, they try to survive the night and each other.

Variety and friction among the characters is always important in a good zombie movie.  Here, Ben is our level headed leader.  That leadership is challenged by Harry (Karl Hardman) who was at the house first with his family.  Tom (Keith Wayne) and Judy (Judith Ridley) are the sweet young couple who want help and stay together, but that may ruin a few plans.  Barbara goes from raving to catatonic, and is not much help.  And that little girl in the basement has been bitten by one of those things, we know what that means. 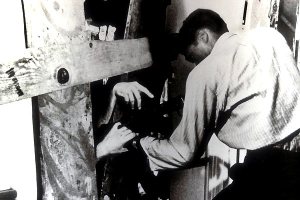 I love the way this film begins and what better place than a cemetery.  When Johnny and Barbara arrive to put flowers on their father’s grave, Johnny is less than respectable about the whole errand.  He complains about how far a drive it is and even jokes that they should just move their father closer to them.  Then he brings up the way he used to scare his sister in the cemetery and continues it, “They’re coming to get you, Barbara!”  Maybe with a little more respect for the dead, he wouldn’t have been our first victim.

In my eyes, George A. Romero’s Night of the Living Dead from 1968 is THE zombie flick.  It’s scary without relying on jumpy moments.  It’s plenty gross without a ridiculous amount of gore.  The black and white photography is intense.  I love the odd angles, the focus on faces and the amazing contrast.  It feels almost primal.  Best of all, these zombies are really frightening and all they can do is shamble, grab and bite, none of that super zombie stuff we see now and then today.

“I ought to drag you out there and feed you to those things!”