As I write this, I am sitting in a local cafe, alone with my laptop, while others around me share long conversations over food or coffee.  Like many characters in Her, I am comfortable being alone in public, so long as I have some electronic device to keep me occupied in my own head.  In Her, you don’t see many people on computers outside their home or office, but with an ear bud in their ear, talking to themselves, carrying on conversations, not with other people, but with computers.  This future (complete with hipster inspired high pants in fashion) does not seem very far from the present many of us are living. 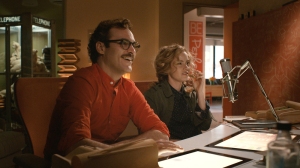 Spike Jonze’s Her tells the story of Theodore (Joaquin Phoenix), an urban writer going through divorce and suffering from loneliness.  From his work, writing personal letters for other people, we see that he is a guy very in tune with his own emotions.  Right away, we imagine he is very sweet and has a lot to give in relationships.  However, dates don’t go so well for him.  We witness one, thrilled for him as it goes well, only to feel his crushing disappointment when he ends up being rejected.  If that’s the norm for Theodore, it’s hard to blame him for eventually falling for a computer.

That computer operating system, or OS for short, is Samantha (voiced by Scarlett Johansson).  As Theodore sets up this operating system, only a couple questions are asked in preference to what sort of voice he’d like to talk to, for example, what was his relationship like with his mother.  From the start, Samantha has a breezy and welcoming personality.  Anyone might enjoy having her in their head, and the way Theodore is so alone, it seems natural that he would bond so well with this voice.  And what makes Samantha so interesting is that she, like any person, is constantly learning, evolving and changing.  The problem is that computers seem to do everything much quicker than humans can even imagine. 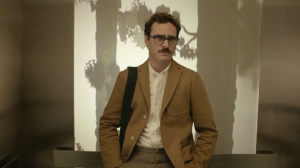 Honestly, I really loved this film, mostly because how for days and days after seeing it, my mind keeps wrestling with some of the issues it brings up.  I think about the inability to connect with people and the ability to connect so easily to technology (just as I can do in this cafe).  Disconnect must be normal in this world if people like Theodore are hired to write very personal letters for complete strangers.  The film makes me wonder about the human need for intimacy and how intimacy may not mean the same thing to everyone, including an OS.  And then that leads my mind into wondering how deeply sex, or just physical contact, can define a relationship.  The scene where Samantha brings a sex surrogate into the relationship is a very uncomfortable moment, with the best of intentions, but only brings awkward tears.

Her has been nominated for five Oscars, including Best Picture, original score, original screenplay and production design.  The Moon Song, a sweet and simple tune by Karen O, is nominated for original song.  I do suggest  giving it a listen and looking over the lyrics, which were written by Jonze.

Now, I know Her is being billed as a comedy, and it does have some hilarious moments, but to me it feels too heavy to really be a comedy.  It feels like a comedy like Kafka wrote comedies.  There is a lot of food for thought sprinkled among light moments and then heavier moments that, in a sense of those who are not  attached to these computers, feel like they may not matter much.  It is hard to describe the specific genre to consider this film.  The phone sex scene and video game scenes had the whole theater rolling, yet there are many heavier scenes where we feel that poor Theodore’s world is just crashing down.  And if Samantha doesn’t help him cope, she is the problem.  Odd and yet so close to home for anyone attached to their devices.

“I feel like I can be anything with you.”