Even now, nearly fifty years since the assassination of John F. Kennedy, there are still arguments and scrutiny over exactly what happened on November 22, 1963.  I realize that there are many people who have strong feelings on either side of the issue, but for the sake of an accurate review of the film and the reasoning it presents, all ideas following are based from the film and are not my personal opinion or interest.  Oliver Stone made JFK to make us rethink, so let’s not immediately shut that down.

With a mixture of facts and opinions, the film details the work of Jim Garrison (Kevin Costner), the District Attorney of New Orleans, who believes there is more to the Kennedy assassination than the public was told.  He takes it upon himself to open up old files and investigate, pulling up an array of characters, some of them old acquaintances of Lee Harvey Oswald.  Soon, he speculates that the conspiracy goes all the way up to the White House.  All his time and energy spent on the case, and poking his nose around, causes a strain on his family life and could eventually put them in danger.  Nonetheless, he persists, driven by his need for uncovering the truth and bringing justice to the American people.

Where the film truly excels is in its editing.  At many points in the film, someone is narrating an episode from the past.  Within these narrations we are shown flashbacks or bits of news coverage to illustrate and better understand their story.  To do this in a compelling way that flows visually with minimal distractions and discontinuity is challenging enough, but these pieces of masterful editing also bring the viewer more understanding and emotional investment in the narrative of the film.  Often, these moments are quick with many perspectives going on at once.  It can be like a juggling act, but amazingly, we do not notice the hands in motion. 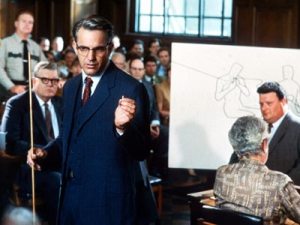 The way Garrison presents his evidence, especially towards the end of the film is stirring and powerful.  Unless you have decided long ago not to take anything Garrison says seriously, it is hard not to be moved by his statements.  We have seen him devote the time and energy to this case and we realize the implications at hand whether he succeeds or not.  To some extent, we’re not just rooting for justice over Kennedy’s murder, but for Garrison to succeed in all his work.  Pinning him against the cool, coy, assumed bad-guy Clay Shaw (Tommy Lee Jones) only helps this cause.

Though the film is partially based on opinions, the fact is, we do live in a world where a modern president of the United States was killed in broad daylight in front of innocent civilians and not everyone agrees why or how this happened.  No matter what you personally believe on the subject, JFK pulls a compelling argument all in favor of seeking the truth for the good people who are still looking for it.

“Who grieves for Lee Harvey Oswald?  Buried in a cheap grave under the name ‘Oswald’?  Nobody.”