The title Green Book refers to an artifact that many never knew existed. Published until 1966,  The Negro Travelers’ Green Book served as a reference guide to find restaurants and lodging that would serve blacks, especially in the deep south. Tony Lip (Viggo Mortensen) and Dr. Don Shirley (Mahershala Ali) uses this guide book to accommodate Don on his tour through the deep south, where he will play as a guest of honor for some of the richest people in the world and yet be turned away to eat at the same dining room that he is expected to perform in. 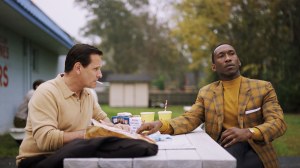 This film works partially as a road trip movie and partially as an odd couple comedy and both of those journeys come to a happy end destination. Tony is a working-class Italian-American living in the Bronx with his wife and kids. Don is a world-class pianist who lives above Carnegie Hall like a royalty. When Tony is out of work, he is hired to be Don’s driver on his first tour across the American midwest and south. The two clash almost immediately, but Don has faith that Tony is the right man for the job. Through long roads, misadventures and some close calls, the two come to look past race and class to better understand one  another and become good friends. 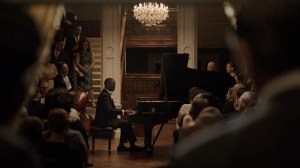 While Tony is rough around the edges, volatile and racist at first, he ends up having a good heart under it all and really helping Don along their journey. Opposite Tony, Don is very cool, calm and a tough nut to crack. Even when in jail he is calm knowing that he did nothing wrong and the police have no cause to keep him locked up. His most vulnerable moments, at a bar and a YMCA, are most telling and heartbreaking. Thankfully, Tony is understanding and knows just how to diffuse the situations. Throughout the journey, the two really need and work well with each other. I especially love how Don helps Tony with his letters to his wife.

Some of the biggest laughs come from Tony’s hilariously sloppy appetite. We often see junk food and candy wrappers littered along the front seat beside Tony as he drives. We even see him win a hot dog eating bet and fold up a whole pizza to eat by himself! The scene just after they enter Kentucky and stop for Kentucky Fried Chicken is hilarious as he offers Don a piece. He refuses at first, complaining that Tony is getting grease on his blanket and confessing that he’s never had fried chicken. Tony keeps pestering him, while driving, until Don tries some, cautiously at first, then enjoying it in his much less messy manner. It’s a fun bonding moment for the pair, especially as they chuck their chicken bones out the window. The scene ends with Don still keeping control over Tony’s antics. 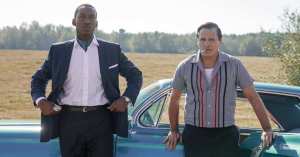 Green Book is nominated for five Academy Awards including film editing, original screenplay and Best Picture. Both Viggo Mortensen and Mahershala Ali have been nominated or their outstanding performances, Mortensen for lead actor and Ali for supporting.

While I never expected Green Book to be anything great or monumental in this year’s Oscar race, it did do something no other film this year could. It gave me that genuinely happy, warm and fuzzy feeling. Very few Oscar caliber movies can do that. But Green Book, while dealing with themes of racism and class differences, is wonderfully sweet, engaging and funny. It’s so enjoyable to watch the beginning of a beautiful friendship.

“Trained? What are you, a seal? People love what you do! Anyone can sound like Beethoven or Joe Pan or them other guys you said. But your music, what you do? Only you can do that!” 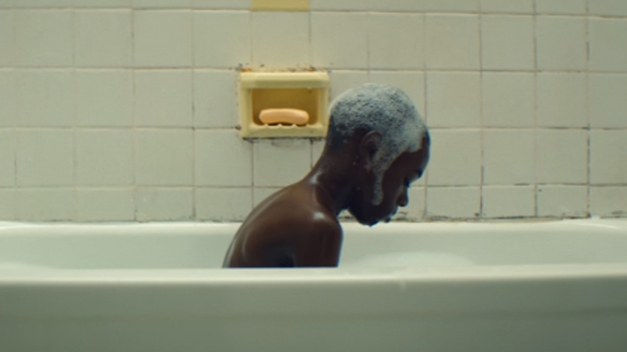 Moonlight chronicles the life of Chiron, a boy growing up in a rough Miami neighborhood. The film is broken up into three acts, featuring Chiron at different stages of his life. 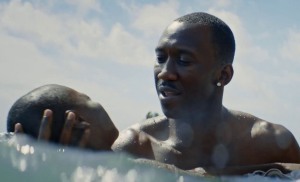 In the first act, entitled Little, we meet nine year old Chiron, but here everyone calls him Little. After being chased by a group of boys, Little takes shelter in an abandoned apartment, littered with broken glass and crack pipes. Juan (Mahershala Ali) finds him here and begins watching out for the boy. Juan becomes a male role model for Little and their trust is beautifully shown in their day at the beach, where Juan teaches him to swim.

However, Juan is a drug dealer. When he realizes that he has been selling to Little’s mom, Paula (Naomie Harris) it’s a tough pill to swallow. Paula neglects Little to get her fix and verbally abuses him when she’s high. It’s heartbreaking to see Little just stand numb to her and ask Juan and his girlfriend Teresa (Janelle Monáe) about hurtful words he doesn’t understand yet.

Act two, Chiron, shows our protagonist as a teen. Just like his Little self, Chiron is awkward, skinny and innocent, especially compared to the boys around him. They are now defiant young men that openly mock Chiron in class. One night while avoiding his strung out mom, Chiron begins a romantic relationship with the only boy who showed him much kindness, Kevin, who affectionately calls Chiron Black. But back at school, Kevin has a reputation to maintain and beats Chiron when egged on by the other boys. This seems to awaken Chiron into a hardened manhood that leads into Act three, entitled Black.

The Oscar nominated cinematography in Moonlight is a style like no other. Seeing Little run and play with other kids feels free and intimate. I especially loved the style of his dancing scene. Moments with Paula yelling at Little, backlit from the pink neon light in her room are mesmerizing. And yet, there are times where the camera seems to be mounted like a GoPro, especially in car scenes. It’s a bit jarring, yet very authentic, much like the story. 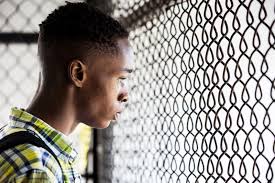 The originality of Moonlight is refreshing and rejuvenating in today’s stale cinema. This is certainly the first story of a young, homosexual, African-American in a rough neighborhood I can recall seeing recently. I hope they unbridled visual here becomes inspirational for many future filmmakers.

“At some point, you gotta decide for yourself who you’re going to be. Can’t let nobody make that decision for you.”