I believe Merida has modified her dress so that she can move freely. Function trumps fashion.

After the successful opening weekend of their latest film, Brave, Pixar Animation Studios can give themselves a big pat on the back.  They have made the best movie about a princess, better than Disney ever did on their own.

You see, I grew up through an evolution of Disney princesses.  Very young, I knew Snow White, Sleeping Beauty and Cinderella and thought they were all worthless panty waists.  Then came Ariel, who gave up her greatest talent for a guy she barely knew.  I threw her out like old tuna.  Belle grew on me a bit, we were both seen as odd and loved to read, but she was still too girly and falling in love with the hairiest thing around was a little unsettling.  Jasmine was completely incompetent outside the palace, don’t get me started on her.

Some of their poses make no sense…and shouldn’t Ariel be gasping for air?

In the mid 1990s, when I was about ten years old, Disney started an odd shift in their princesses.  Pocahontas was an odd twist playing fast and loose with a small piece of history and turning it into a love story celebrating nature and promoting cross-cultural peace.  However, I knew too much history to be tricked.  Mulan (not technically a princess) was a step in the right direction, with her warrior status and ability to keep up with the men, but there was still an element of romance that I felt was forced on her.  Same basic issue with The Princess and the Frog, but I liked how Tiana works hard for all she has.  Then Tangled, seemed to revert back into fairy tale mode.

Now, it seems that Pixar has taken up the torch and finally given this tomboy a princess she can identify with.  Merida is a wild child, with amazing hair to match, who would rather run free in the forest, shooting arrows into the sunset, than get married.  Thank God!  It gets better: she doesn’t like fancy dresses, walks with a rugged swagger, is very resourceful in the wild, can best the boys at their own games and voices her (often smart-ellic) opinions.  I’m sure I’m not the only girl who’s waited her whole life for Merida. 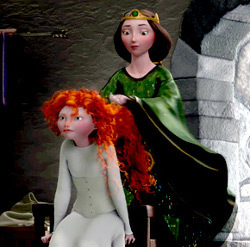 Finally, a princess that doesn’t want her hair brushed all day.

Not only does Merida show a personality I can love, but she has issues I can understand.  At some point, I think most tomboys and their mothers find a rift between them.  As dear mom tries to teach us how to be a lady, we resent every notion of it when we’re young.  I remember dresses and bows in my hair feeling like torture forced upon directly by my mom.  My smelly sneakers, backward baseball caps and love of monster movies were small acts of rebellion.  But as we grow older, we understand that it was all out of love and take some lessons to heart, and in turn, she loves how we are never fully outgrow our tomboyishness.

I love what Pixar has done with a very Disney story, but I hope (and worry) that they don’t get complacent.  What I, and many others, have always loved about Pixar is that they do not crank out Disney style films.  Their stories have always been fresh, fun, creative and unexpected.  Though I am thankful for their contribution, there are more than enough princesses in the world and not nearly enough Carl Fredricksens.