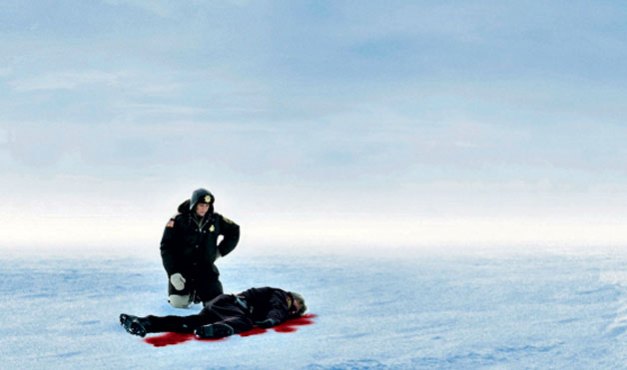 Right here, it’s snowing outside.  The sky is a dull white, matching the snow covering the ground.  To get from town to town around here, you have to take the vacant country roads with sprawling white fields at each side.  Add in just a touch of fog or snow, the sky matches the ground and the road disappears into the white unknown.  I could drive a mile up the road right now and lose myself knowing that Fargo looks just like the world around me.  An eerie, cold no-man’s land, where the pure white snow only magnifies anything out of place. 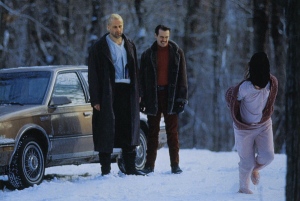 Jerry (William H. Macy) is in some deep financial troubles.  The details are never explained because they are not important.  What is important, is that Jerry is desperate enough to hire two men from Fargo, Carl (Steve Buscemi) and Gaear (Peter Stormare), to kidnap his wife, in hopes of splitting the ransom that his wealthy father-in-law (Harve Presnell) will pay.  Jerry gives the men a car off the lot of the dealership he works at, owned by his father-in-law.  But things get messy, the kidnappers kill a cop and two innocent people in Brainerd.  This sends a pregnant cop, Marge (Frances McDormand), out to investigate.

Carl and Gaear are a perfect duo of scumbags.  Carl is repeatedly described as the little funny looking one who’s looking for action, entertainment and money.  Gaear is the more stoic and ruthless one who can shoot a cop in the head without batting an eye.  Carl complains that he hardly talks their entire car ride from Fargo to Minneapolis.  I see Gaear as a human embodiment of the harsh, snow covered, flat scenery that offers nothing much to talk about. 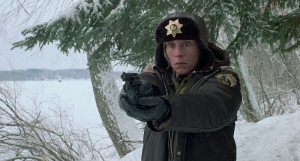 Marge is one of the greatest portrayals of women in modern cinema.  McDormand won the Oscar for lead actress in this role.  Marge is an amazing, tenacious woman who can walk out to a murder scene in six inches of snow six months pregnant.  She and her husband have a loving and simple support system with each other.  Marge is the breadwinner while Norm is an artist, and he makes sure his pregnant wife is eating well.  It’s so refreshing to see a strong, bold, successful woman, in a loving relationship that that has a level head on her shoulders and doesn’t need to be wearing anything more flattering than a fuzzy deer-stalker hat.  That thick Minnesota accent just tops it off as perfection.

What makes this film so amazing is the perfect mixture of senseless violence and the chilling setting.  There’s something about snow that’s so peaceful, pure and innocent.  In the dark, it has this power to become reflective, giving illumination to whatever wrongdoing is going on at the moment.  It can even contribute to the chaos, causing cars to lose control and flip over onto the side of the road.  What is most chilling is when we see a body or blood strewn across and tainting all that was once pure and white.

The most shocking thing about Fargo is that it is based on a true story.  And if the film’s plot follows the truth well enough, it was set in motion by a bumbling family man with money problems.  Of all the horrible ways for senseless violence to be set in motion, it was all completely preventable by one mild mannered man.  Jerry has no idea the string of bloodshed he set loose until it’s far too late and we have no sympathy for him.

Fargo is, by far, the best film of 1996.  The story is shown to us perfectly and the bleak visuals are spellbinding in their simplicity.  Each character has perfect contributions to the plot and are brought to life wonderfully by each actor.  And the ruthless violence among an otherwise peaceful setting stirs us down to our core.  If you want to see the Coen brothers at their best, Fargo is it.

“OK, so we got a trooper pulls someone over, we got a shooting, these folks drive by, there’s a high-speed pursuit, ends here and then this execution-type deal.”