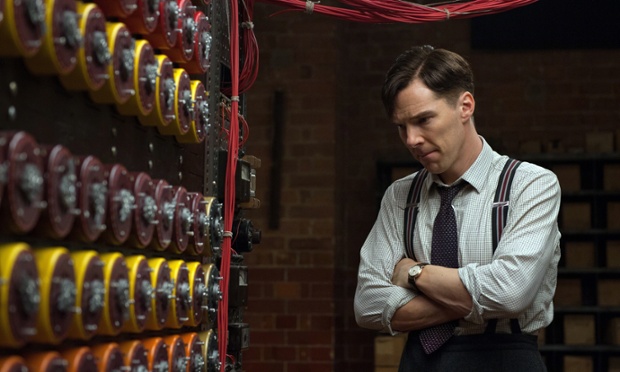 The Imitation Game is a surprisingly thrilling biopic about Alan Turing’s remarkable top secret work during World War II.  He and a small team of mathematicians are hired by the British government to crack Germany’s enigma code.  The code was considered unbreakable.  It could be one of over five million codes and reset every twenty-four hours.  Against all odds, Turing built a massive machine, a first computer, to crack the code and named it Christopher. 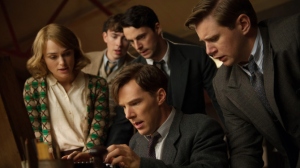 Turing seems like a very unlikely hero.  Played by Benedict Cumberbatch, he is a scrawny man who seems too smart for his own good.  His social skills are small to none, yet his intellect and code breaking skills are through the roof.  Plus, he is harboring a secret that could ruin his life.

As Turing becomes the leader of this code breaking team, he seeks out new recruits.  He does this will a crossword puzzle in the newspaper, and one of the few people who can solve it quickly enough is Joan Clark (Keira Knightley).  The scene where the men in charge are sure she is in the wrong room, is annoying to every feminist instinct inside me.  Oh little girl, the secretaries are in the other room.  Ugh!  But Joan is as much a badass as she is intelligent and becomes a key member of Turing’s team. 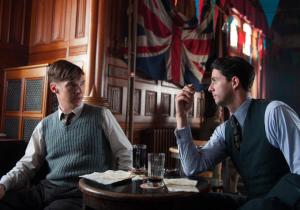 I’ll admit, I almost dreaded seeing this film.  I mean, another biopic about a nerdy white British guy in the same year?  However, I really enjoyed The Imitation Game and felt very involved in every step and turn throughout the film.  This is not just a straight up biopic, but a war film mixed with a spy thriller with a strong message about tolerance and the amoral justice that faced any homosexuals in Britain.  Plus there are moments that will make any nerd who has ever attempted to build his own computer drop their jaws in awe.  Turing was indeed a visionary, a master and the father of the modern computer.

The Imitation Game is nominated for eight Academy Awards.  Morten Tyldum is up for his first Oscar for best director and Keira Knightley for supporting actress.  Benedict Cumberbatch is in the running for lead actor, and while his performance is worthy of the nomination, I fear he will leave without an Oscar. The film’s other nominations include film editing, adapted screenplay, production design, original score and best picture.

The Imitation Game is the biopic I most recommend seeing in this Oscar race.  It has moments that make you think, make you laugh, make you hold your breath and cheer.  It’s a moment in history that has been tucked away for too long, come to life beautifully.  See it and marvel at the grand daddy that became your modern computer and smartphone.

“Now, if you wish you could have been normal…  I can promise you I do not.  The world is an infinitely better place precisely because you weren’t.”