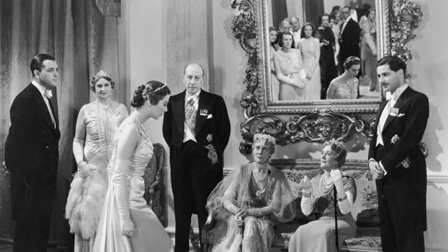 In the first month of this blog, I watched My Fair Lady, the musical remake of Pygmalion, for the first time in my life and simply ripped that film a new one.  I still stand behind what I said, but realize now that all I needed to enjoy the same story was less flamboyant actors and no musical interruptions to slow the plot.  That’s exactly what Pygmalion is, and I welcomed every minute of it. 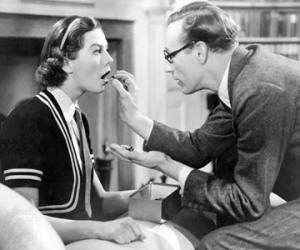 The story is exactly the same:  pompous phonetics professor Henry Higgens (Leslie Howard) takes a bet that he can pass a crude flower peddler Eliza Doolittle (Wendy Hiller) off as a lady just by teaching her to speak proper English.  Along the way, Henry’s mother (Marie Lohr) and Eliza’s father (Wilfrid Lawson) provide more meaning to class distinction and Colonel Pickering (Scott Sunderland) is the kinder gentleman in contrast to Henry’s stance on treating Eliza like an animal to train.  I may not have taken much notice on that last part in My Fair Lady, what with all the songs disrupting my thoughts on character development and boiling my blood.

Though I agree that Audrey Hepburn is a fine actress, her portrayal of Eliza feels almost like a caricature after seeing Hiller’s more subdued but just as potent performance.  Hiller brings out a more meek and naturally charming Eliza.  In Pygmalion’s first act, Eliza is much easier on my ears and nerves but still makes the idea that her speech is very unrefined clear.  And the sort of comedy in the “influenza scene” seems to be naturally more comical in the 30’s. 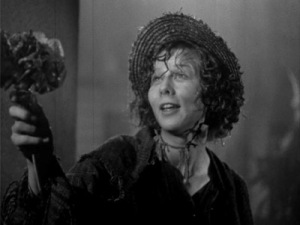 The word Pygmalion may be mysterious and off putting to some, but with my love for mythology, the main idea of the story was instantly conveyed in that one word.  In Ovid’s Metamorphosis, Pygmalion is a sculptor who did not care for the women around him and fell in love with his own beautiful ivory sculpture of a woman.  Though he wished for his work to turn to flesh, he was afraid to ask the goddess of love, Venus, to grant it.  Nonetheless, she knew his wish and turned the sculpture to a real woman just for Pygmalion.  This mythis acknowledged in the beginning of the film, but I cannot recall if My Fair Lady gives Ovid his due credit.

I apologize for all the comparisons, but when you’ve seen both and have had opposing reactions to the same story, I feel the need to explain why.  Pygmalion is has wonderfully structured plot, with fine character development all tight knit into a slim 90 minutes while My Fair Lady nearly doubles that time adding nothing to the story but song and dance.  The fact that Professor Higgens and Eliza are much closer in age makes the possibility of romance much more agreeable in Pygmalion.

There are only two reasons to see My Fair Lady instead of Pygmalion: color and the musical aspect.  If you want to see the same story with better acting, more likable characters and save an hour and a half of your life for something important, go with Pygmalion.

“Yes, you squashed cabbage leaf, you disgrace to the noble architecture of these columns, you incarnate insult to the English language, I could pass you off as the Queen of Sheba!”