“As far back as I could remember, I always wanted to be a gangster.”

The way Henry Hill (Ray Liotta) tells it, being a gangster was the best life he could imagine.  Better than being president.  Like being a movie star with muscle.  It meant he was somebody in a neighborhood full of nobodies and anything he wanted was just a phone call away.  Like he says, “It was a glorious time.”

Based on Hill’s real life story, he first got into the mafia as a young teenager, working for Paulie (Paul Sorvino) and his boys.  We see him as just a kid, breaking car windows, running away as they blow up and making more money than most of the grown-ups in the neighborhood.  When his parents get a letter from school saying he hasn’t attended in a month, Paulie roughs up the postman, making sure no more letters from school arrive at Henry’s house.  It looked like this kid had it made.

When Henry is grown, the mafia has only gotten bigger and though he’s a young man, he can live like a king.  He starts dating Karen (Lorraine Bracco) a Jewish girl, who soon figures out his life of crime.  She knows she could have gotten out and had nothing to do with Henry right away, but she admits that it attracted her to Henry.  After they marry, she learns a lot about being married to a gangster from the other mafia wives.  She gets used to the late nights and soon she says it does not like crime, but enterprising.  They have quite an exciting life together, being able to get into the nicest clubs whenever they want and all, but when Henry does time in jail, Karen is suddenly all alone, with no contact from Paulie or the other guys. 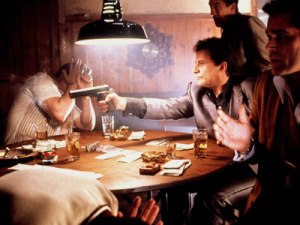 After Henry is released, he’s warned by Paulie to be more careful and don’t do anything without telling him first.  But Henry is eager to get back into business and starts selling drugs, is involved in a big heist with Jimmy (Robert De Niro) and has to help Tommy (Joe Pesci) whenever he gets a little crazy and kills a guy or two.  If you screw up in the mafia, it does not take much to get you whacked, even by your friends.

Of all the colorful mob characters in this film, Tommy is the greatest.  To me, he seems like a little guy who tries to overcompensate and can turn crazy on you over nothing in a heartbeat.  His “Funny how?” scene towards the beginning is just a small taste of how Tommy can can turn one little thing into a huge deal.  The tension he gives off always makes us nervous, we never know if he’ll just laugh it off or kill someone over nothing.  Even better than when he does just explode and blow someone away, is the way he can be so calm and nonchalant about what he’s just done.  Two things are certain: never bust Tommy’s balls and Joe Pesci completely deserved that Oscar win.

One of the most iconic scenes of Goodfellas is the long shot showing Henry and Karen going in the back entrance of a club.  The camera follows them all around, where Henry seems to know the way around easily, even through the bustling kitchen.  Everyone who greets him is handed $20 bills and someone carries in a brand new table and sets it up right in front of the stage, like they have it waiting just for him whenever he arrives.  This perfect long shot shows just how much of a big shot Henry is here and Karen notices.

If there were an award for Gangster Film of the year, Goodfellas blew away all the competition of 1990, especially The Godfather: Part III.  This look at mafia life feels very laid back and charismatic in comparison to others.  We see that Henry has come from a very humble background, just the oldest kid from an Irish/Jewish family, which makes him more relatable.  The narration that switches between Henry to Karen makes this all feel more personal and help us understand exactly what is going on, both within the mafia and within the family life.  And Martin Scorsese once again directs like a genius, with his depictions of harsh violence ranging from brutal and disgusting to a hauntingly beautiful montage.  If you can handle the violence and 2.04 F-words per minute, you’ve got to put Goodfellas on your must-see list.

“One day some of the kids from the neighborhood carried my mother’s groceries all the way home.  You know why?  It was outta respect.”