In the Name of the Father

In Belfast Ireland, Gerry Conlon (Daniel Day Lewis) is not a model citizen.  In the first few scenes of the film, we’re shown how he’s a petty thief, stealing scrap metal and then inciting a riot against the IRA.  With all the trouble he’s stirring up, Gerry’s father, Giuseppe (Pete Postlethwaite) sends his son to London to let things cool down at home.  He gives Gerry a little advise, “Remember, honest money goes further.”  Gerry’s the kind of wayward son that just shrugs this off, “He had a cliche for every occasion.” 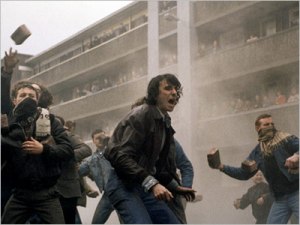 While in London, Gerry’s ways don’t change.  Instead of staying with family and looking for work, he finds a house full of hippies, where he can find free love and dope.  When bombings start happening in London, some of the hippies become suspicious of Gerry.  He did just come from Ireland.  After a pub is bombed, while Gerry was looking for a place to sleep and stealing money from a hooker, he becomes the main suspect.  He is arrested at his family’s home and they all become accomplices with the bombing.

Gerry is innocent, but after days of fierce interrogation and being told he did it, Gerry breaks and signs whatever the police want him to.  That breaking point comes after one officer whispers a threat into Gerry’s eat that he’s going to kill his father.  It’s an eerie scene, the way that man just plays with Gerry is horrible and rightly sends Gerry over the edge.  With Gerry signing the confession, he, his father and two others are sentenced to life in prison.

From here, it’s father and son, two innocent men in jail.  Given the name of the film, I was dreading a conventional father-son bonding time where Giuseppe brings Gerry into the right light using faith.  Thankfully, the film only lightly brushes against that idea, bringing the father and son closer but overall it becomes a struggle within prison.  And when Joe McAndrew (Don Baker), the man who confessed to and really did bomb the pub is brought into their prison, times get tougher but stakes are higher. 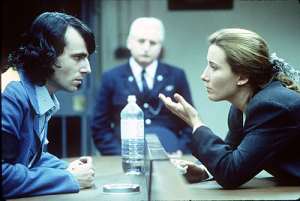 The real motive in this film, is to prove that Gerry and all accused with him are innocent.  That takes one determined lawyer, Gareth Peirce (Emma Thompson) and a long listen to Gerry’s tapes telling his story.

In the end, the film didn’t really get to me.  It was just another one of those movies making sure to tell the real story behind a huge injustice.  While morally, I applaud that (and the Academy often does too), I wasn’t feeling a good balance between the struggles of prison life and the injustice happening outside the prison.  The first part of the film was much more exciting than the time in prison.  I completely understand that the focus is on Gerry and Giuseppe during the imprisonment stage of the story, but about the other nine people wrongly accused?  Besides later hearing the time they served they are not important.

A father-son wrongly go to prison movie doesn’t sound like a good father-son movie night, does it?  Instead, I would suggest In the Name of the Father if you’re interested in films about real-life injustice.  If you’re not into such serious topics that ultimately can bum you out, skip it.  Daniel Day Lewis is always good, but he’s better now with an awesome mustache anyway.

“You haven’t the maturity to take care of yourself, let alone your mother.”