In Flight, Denzel Washington plays Whip, a pilot leading a life of addiction.  His routine seems to be booze and loose women at night, followed by cocaine like a rejuvenating chaser before he begins flying all day.  Somehow this works for him, and probably has for years, until a mechanical failure mid-flight forces him to make a daring crash landing.  He is regarded as a hero for his quick thinking, but as the investigation of the crash digs deeper, his sobriety comes into question. 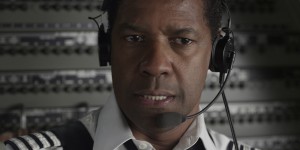 A majority of the film focuses on Whip’s denial and the way he and the airline’s team of lawyers plan to save his public reputation.  There is a lot of damage control by many people.  Right away, Whip retreats to his remote family home and dumps all the drugs and alcohol.  The lawyers get Whip’s blood sample, with a damning blood alcohol content of .2 and traces of cocaine, stricken from the record due to trivial technicalities.  And when things really go south at the crucial moment, Harling Mays (John Goodman) is called in to give Whip his dose of cocaine to fly above his hangover.  It’s a lot of work to keep Whip looking like a hero.

The crash scene is an early pivotal point in the film that comes with nail biting intensity.  In a sudden moment, what was a normal flight becomes a nightmare when the plane inexplicably goes into a nosedive.  This wakes Whip out of his drunken nap (he made himself a screwdriver earlier in the flight), to find that his copilot, Ken Evans (Brian Geraghty) has no control.  With quick thinking, he orders everyone to strap in and he turns the plane upside down, to glide towards an open field and lose speed.  As the ground grows nearer, and one heroic stewardess is helplessly hurled around the cabin, he flips the plane back upright just before taking out the steeple of a church and crashing into the field behind it.  This scene, especially just after the crash, is not for the faint of heart.

One thing I really enjoyed about Flight was the soundtrack.  It boasts classic hits like Gimmie Shelter by The Rolling Stones and Feelin’ Alright by Traffic.  Many of the songs seem to help set a tone for Whip’s intoxicated state.  Perhaps it is how Whip has come to imagine himself after all the liquor and cocaine and he is heading into the air.  He does a good job of pulling off this persona under his authoritative uniform and dark sunglasses.

At last year’s Oscars, Flight was nominated for two awards, best original screenplay and Denzel Washington was nominated for lead actor.  When it came to the best picture race, I believe Flight came up just short in a thick field.  It’s a very smart and compelling film that focuses on a man and his journey through and away from his denial of addiction.  It could be a slight disappointment for those who are more concerned with the technical reasons for the plane crash than the character who in all the wrong ways, became a hero.

In revolution torn China, Robert Conway (Ronald Colman) is in charge of getting foreigners out of China before they get hurt.  He, his brother George (John Howard), a paleontologist, an American girl and a few others get on the last plane without a moment to spare.  Mid-flight, they realize the plane is heading in the opposite direction and they crash land in the snowy Himalayas.  It seems they’re doomed to freeze until a band of natives miraculously stumble upon their wreckage.  They are led to Shangri-La, a beautiful valley sheltered on all sides by the mountains.

The men are suspicious, everything seems too good to be true.  Who are these people, how did they get here are they going to eat them?  The High Lama (Sam Jaffe), leader of his people, keep everything very vague and mysterious,

not satisfactory at all to the men.

Robert is told the story of the mysterious land, how the people don’t age and there are no laws.  It seems that Robert has found his utopia and may even have a hand in running the beautiful place.  But George could ruin everything, hell-bent on returning to England.

The concept of Utopia has never been any closer than a dream for mankind.  In an early scene on the airplane, Robert daydreams aloud about what he wishes he could do if appointed to Foreign Secretary.  He talks of an England with no army, no threat of violence to others and in turn the rest of Europe follows suit and eventually the world.  George just laughs and thinks the whole idea is foolish.

This poor film seems to have chunks missing, a little disclaimer said that in the restoration there is more audio with missing images.  It’s sad realizing that pieces, that I thought would be pure gold to the film are gone, but the story is still present through the audio playing.  At these times, a still image is shown on screen, usually to show you who is talking or where the setting is.  Remember those slideshow movies they used to have in schools?  They were dinosaurs in my time, but I remember a few.  Anyway, those missing pieces feel a little like that, but it’s only a few minutes of the whole film, so try not to let it turn you off.

Before you order this on Netflix, make sure you don’t read the second half of the summary, they ruin the great twist of the film for you.  The end is a bit of a whirlwind, but I was disappointed in Netflix feeling like they had to hold my hand over a little rough patch.  Really, their summary gives away nearly everything but the last minute, not cool Netflix.

Lost Horizon is a wonderful film and I’m so glad it has been restored this well.  Outside of the technical difficulties and Godzilla style toy plane crash, I found myself very involved with the story and enjoying the characters.  Today, concepts of a utopian society feel cheesy, unsophisticated and threatened in such vulgar ways (Avatar anyone?).  In Lost Horizon the whole idea is dignified, not preachy and has a feeling of inner peace.

“Yes, my son; When the strong have devoured each other, the Christian ethic may at last be fulfilled and the meek shall inherit the earth.”