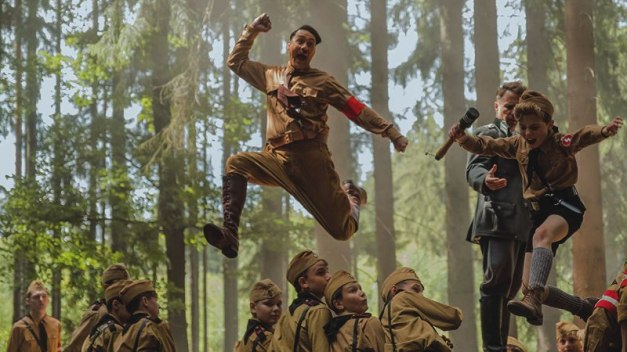 Satire is like a tightrope, it’s risky and the performer should know what they’re doing. Any missed step, or slack in the rope, and it will all come to ruin. In Jojo Rabbit, director Taika Waititi keeps the rope taut, the story tight and balances himself in a very risky role, portraying a boys imaginary friend, Adolf Hitler. 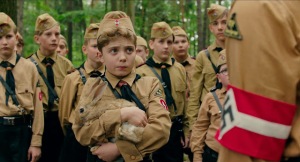 In 1940s Germany, ten year old Jojo (Roman Griffin Davis) is a big fan of Hitler, the SS and all things Nazi. Propaganda posters plaster his wall as if they were pictures of rock bands and movie stars. He proudly wears his uniform, as if he were a Nazi boy scout and runs through the streets giving everyone a friendly and enthusiastic “Heil Hitler!”

At a Nazi sleep-away camp (which he and the other kids think is the best time, ever) Jojo is singled out by a teenage counselor. He’s asked if he can kill and hands Jojo a rabbit. Jojo freezes and tries to urge the rabbit away only for the counselor to kill it himself and give Jojo a cruel nickname. After some time crying in the woods and talking with his imaginary friend, Adolf, Jojo tries to prove himself. His act of bravery, as hilarious as it is heartbreaking, leaves him scarred, broken and limping after he recovers. Poor Jojo, not ready to hang up his swastika still finds ways to help with the cause, but his thinking begins to change when he finds a Jewish girl hidden in his house. 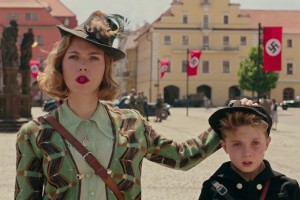 The way this film lets us laugh at Nazi fanatics is daring and delightful. Some of the ridiculous rumors Jojo has heard about Jews gave me some of the biggest laughs. The way Sam Rockwell and Rebel Wilson lead and mold the young kids into proper Nazi’s worthy of Germany is hilarious. Wilson with her signature awkwardness, drops some of the best one liners. Rockwell’s character is often drunk and may be a closeted homosexual. His design for a new uniform is fabulously ridiculous. And in the end, he’s not all bad. But Wilson’s character probably is.

But this film isn’t all laughs. It makes sure to show us how dangerous this fanatic Nazi mentality is and how it destroys lives and families. The way the town displays traitors hung in the town square is especially heartbreaking. And as the front moves towards the town, war looks less and less glorious to Jojo and the young Nazi boys who were so enthusiastic beforehand. 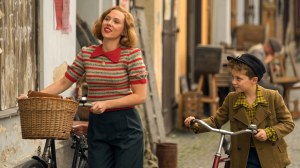 A surprising aspect I did not expect from this film is the amazing mother-son relationship. Jojo’s mother, played by Scarlett Johansson, tries to give her son a better view on life than what the Nazi’s have been teaching him. She likes to dance, take her son on peaceful bike rides and it’s obviously frustrating when he’d rather recite the Nazi dribble he’s been taught. We can see that she’s part of the resistance, but she cannot share that with her son, for fear that he will tell. I loved the dinner scene between them when they argue, the mother gives her son a startling impression of his father and it ends with them dancing.

Now, all the buzz for Jojo Rabbit really came from Taika Waititi and his hilarious imaginary Adolf performance. What’s important to remember is that Waititi is not playing Hitler the historical figure and possibly worst person to ever live, but Adolf as Jojo imagines him to be, his best friend. Waititi’s performance is childlike, silly and teeters on sweet at times. It’s a daring and risky role to take on, but I think Waititi knew exactly what tone was needed and nails it.

But as we grow up we lose our imaginary friends and become disillusioned by our idols. We start to see the world in color, rather than black and white. The growth is often confusing and painful. And Jojo Rabbit brings us a masterful story about all that, full of laughter as well as tears.

“You’re not a Nazi, Jojo. You’re a ten-year-old kid who likes dressing up in a funny uniform and wants to be part of a club.”