The Song of Bernadette

In 1858 a young French peasant girl claimed to have seen a beautiful woman and miracles started happening in the little village of Lourdes.  Today, that young girl is a saint and this is her story.

When we first meet Bernadette, she is always sick due to her asthma and one of the worst students in her school.  She can’t even tell a nun what the holy trinity is, and so she cannot receive first communion.  Her family is very poor, living in a hole in the wall and her father cannot find steady work.  When she and her sisters go out to find firewood something amazing happens.  She sees a vision of a beautiful woman in a cave, and says that the woman wants her to visit that spot everyday for the next fourteen days.  She describes her as wearing a blue robe and has golden roses on her feet.  Bernadette tells her sisters only after they promise not to say a word, but once they get home one immediately tells their mother.  Soon, half the town has heard about Bernadette’s vision.  Bernadette whole-heartedly believes in what she saw and obediently goes back to the grotto.  Soon, she’s drawing a crowd and followers, but there are also skeptics. 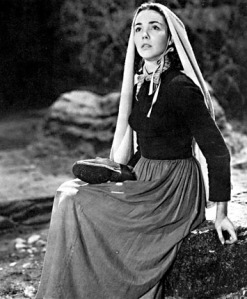 The mayor and high class men running the village see Bernadette as a threat.  They think the whole thing is a hoax and repeatedly question her to see if they can catch her in a lie.  Over and over, Bernadette’s innocent conviction shows that she’s telling the truth, but the men want proof.  So they tell Bernadette to ask the lady to provide a miracle, make the wild rosebush bloom in the last week of February.  The following events are miraculous.  People from all over France begin to flock to Lourdes and Bernadette is headed to the path of sainthood.

Jennifer Jones won the lead actress Oscar for her portrayal of Bernadette.  She keeps such an earnest and innocent demeanor that no one can question Bernadette’s motives.  When she’s kneeling in the grotto, she doesn’t just look at the lady, she sees her.  When questioned in school, or by anyone, she’s extremely humble, even calling herself stupid at times for not knowing things.

Growing up in the Catholic Church, I know I’ve heard the name Saint Bernadette and probably got a quick summery of her story.  This film is much more than a quick textbook version.  It brings in the doubts from all over her village, from the high class men who think she’s a menace, to nuns who don’t realize their envy.  I really recommend this film as a tool for religious education (probably no younger than 2nd grade), but it is two and a half hours long, so maybe a few selected scenes would suffice.  If you’re looking for a good time to show this film, Bernadette’s feast day is April 16th.

“She SEES this lady; others don’t. It may well be that this is indeed a heavenly creature… I intend to go with her, and when I do, let anyone dare to laugh!”