Across the United States, state fairs have become a welcomed institution.  In 1933’s State Fair, based on the novel by Philip Strong, you may find some old and outdated traditions mixed in with the ones that have lasted.  Side shows and trapeze artists have since been traded in for demolition derbies and local talent concerts.  But there are still ribbons ready to be given for the best livestock, produce and cooks.  And the midway is still full of games, thrills and romance.

The story centers around the Frake family from Iowa.  Pa, Able (Will Rogers), is getting their hog, Blue Boy, ready and hoping for a blue ribbon.  Ma, Melissa (Louise Dresser), is preparing her minced meat recipe, fretting over whether or not to add brandy to earn a ribbon herself.  Their son, Walter (Norman Foster) has been practicing since the last fair to win big at the ring toss booth.  And their daughter, Margy (Janet Gaynor), has a suitor who proposes marriage.  She will give him an answer when her family comes back from the fair.

Adventures and romance unfold at the fairgrounds.  Pa spends most of his time at the livestock yard fretting over Blue Boy.  While Walter is busy cleaning out the ring toss booth, he meets a beautiful trapeze performer (Sally Eilers).  And when she is not doing women’s work with Ma at camp, Margy meets a charming newspaper boy, Pat (Lew Ayres) on the roller coaster.  It seems romance blooms easily at the fairgrounds, but will it last when the fair is over? 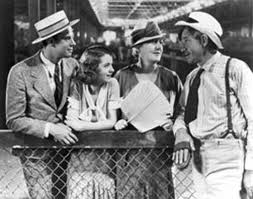 Without getting caught up in how everything is so outdated, State Fair is quite a fun film.  In fact, some of the old-timey phrases are a riot; what exactly does canoodling mean anyway?  The family works well together and giving each character individual problems keeps all of them interesting.  The mix of teenage fair romance with ma and pa’s wholesome competition is a great balance.  And I certainly did not expect to see the hogs oinking in conversation, much less a hog fight.

In all, I was glad to find State Fair, and very happy that TCM premiered it during their 31 Days of Oscar.  For me, TCM’s 31 Days of Oscar is like Christmas time, only with better TV programing to tune into.  Throughout this month of celebrating Academy recognized movies, there will be plenty of films that I have reviewed here, as well as some that I have been searching for (like this one), and some wonderful gems that I plan to see and write about.  Time to enjoy!

“Don’t tell me you’ve been using my hairbrush on that hog!”

In this New York based story, Dorothy (Sally Eilers)and her friend Edna (Minna Gombell) realize the sexism all around them.  Men constantly make passes at them and it’s expected.  They just brush it off saying little things like, “I guess nature made them that way.”  But when they meet Eddie (James Dunn), he barely looks at the girls and that is so odd to Dorothy and Edna.  So they take a little bet, to see who can make him talk, but what he says doesn’t exactly flatter. 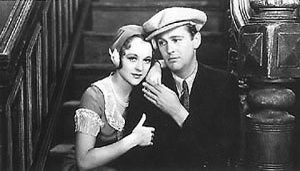 This is why I loved Eddie, he’s got a level head on his shoulders and knows that chasing “Janes” will just bring him trouble.  He frankly explains to the girls that they’re just seeking attention, dressing the way they do and the first guy that doesn’t give them a second glance, they wonder what’s wrong with him.  But Eddie isn’t just trying to be cold, we later realize that he wants to make sure he’s financially ready before he finds a girl and the last thing he wants is to have children he can’t afford.  It’s noble really, but even as Dorothy hears his plans and opinions, she doesn’t have sense enough to let him be.

They start seeing each other and have one very late night together.  Now, in 1931, they’re not likely to tell you exactly what happened, so it’s fine to let your kids watch.  Only problem is that they may get the idea that if they stay out with someone until four in the morning, that sin merits being labeled as a tramp and needing to get married the next morning.  Oh, the shotgun wedding of our grandparents.

Now, even though Dorothy has kind of ruined his plans overnight, Eddie is wonderful to her through everything.  He works himself to the bone to get his bride everything, but when Dorothy realizes she’s pregnant, she keeps it from Eddie for too long.  I mean way too long.  Long enough Eddie realizes that she’s keeping a secret, so he decides to blow his entire savings and gives her a new furnished house, but he too keeps it a secret.

On one hand, we see how a smart, well meaning guy like Eddie can get into the kind of financial jams he claimed he never would.  But on the other, we see that the one thing that puts them in that situation is a lack of communication.  Sure, they both had their reasons, but aren’t these the two of the most important things to make sure you tell your spouse about?

While the written plot is well thought out and builds up perfectly to the birth of their child, the story will boggle the modern viewer.  That scene with all the men pacing around anxiously in the lobby while upstairs their wives are giving birth is pretty outdated, along with the concepts that make Dorothy the title Bad Girl.  The film should be renamed Bad Communication and marketed as a guide of what not to do in any relationship.