In a small British mining town, Mrs. Morel (Wendy Hiller) has raised three sons with hopes of them finding a better lifestyle than a coal miner.  The middle son, Arthur (Sean Barrett) has followed his father to work in the mines.  Thee eldest son, William (William Lucas) has moved to a city, and is engaged to a young lady.  In front of her youngest son who still lives at home, Paul (Dean Stockwell), Mrs. Morel comments, “Strange to think she means more to him now than his own mother.”  Paul is the closest son to his mother and a very philosophical young man who aspires to be an artist.  He often discusses spirituality with his old childhood friend, Miriam (Heather Sears), who comes from a very strict and stoic religious family.

After Paul enters a painting into a local art exhibition, a man offers to buy the painting and fund Paul’s art studies.  Both Paul’s dream, and the dreams his mother has for him, are about to come true.  But when tragedy strikes at the mine, killing Arthur, Paul feels guilty about leaving his mother alone with his alcoholic and abusive father (Trevor Howard). 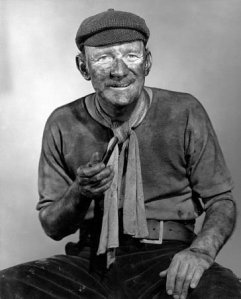 With Paul’s decision to stay in his town comes a need to explore and learn in new ways.  He and Miriam fall more in love, but have very different ideas on the physical side of their emotions.  Unsatisfied and disillusioned at their first attempt, Paul later seeks out a woman with more radical ideals closer to his own, Clara (Mary Ure).  Problem is, she is married and word of a scandal like this travels fast in a small town.

The film is in beautiful a black and white, where images of great contrast seem most pivotal.  The large wheel working the mine shaft lift seems to turn ominously and look down at the whole town when the mining accident occurs.  Then there is the image of Mr. Morel after a long day in the mines, face covered with a deep soot that seems lighter around his eyes.  This image inspires Paul’s painting that propels him to the dreams of an art school scholarship.  Later, in the affair with Clara, the camera follows the couple as they run along the bright beach and then under a dark pier, with a wonderful pattern of crisscrossing iron beams.  These amazing images that still hold up, even when I found this on YouTube, are why the film won the Oscar for best black and white cinematography.

Sons and Lovers is a wonderful, artful and thoughtful film based on the novel by D.H Lawrence.  The ideas about the relationships between parents and children, especially mothers and sons, are very captivating.  And there’s something wonderfully powerful and modern about Paul’s ideas behind religion and spirituality that most people would benefit from seeing not matter what their creed.

“You’ll only miss a disembodied spirit, not a man.”