The twelve years Solomon Northrup spent in slavery are depicted as years of pain, torment and constant uncertainty as to whether he will live to see the next day, let alone freedom again.  The weight and realism of this subject, based on Northrup’s autobiography, can make the film difficult to watch at times, but also makes it that much more powerful.

Chiwetel Ejiofor portrays Northrup, a free black man from New York.  He has a wife, two children and makes a living as a musician.  His life seems ideal.  While his family is out of town, he accepts an odd job to play in Washington D.C. and ends up being kidnapped.  He wakes up in chains, in a small, dark, stone cell and immediately whipped for protesting that he should not be there.  He is sold into slavery, along with other free blacks.

After beating a white overseer (Paul Dano), Northrup is sold to a new owner, Edwin Epps (Michael Fassbender).  Epps is especially cruel and his antics are often fueled by alcohol.  He invites the slaves into his house to dance for him and his wife’s amusement, with Northrup playing in the band.  Epps repeatedly rapes one young woman, Patsey (Lupita Nyong’o), until she begs Northrup to mercifully kill her.  The tension brewing between Northrup, Epps, his wife and Patsey leads up to one of the most awful moments in the film. 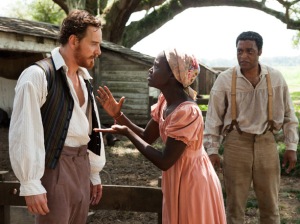 The torments and hardships he and the other slaves endure are heart wrenching and brutal.  A mother is separated from her child, a heart break she cannot overcome.  Northrup and others are repeatedly beaten, sometimes to death.  Others are raped.  In one unimaginable scene, Northrup is nearly hung.  He is left alone with a noose around his neck, the rope tightened over a tree limb, but with one life saving inch before it chokes him.  He has to keep on his toes, in the mud for an excruciatingly long time.  If he slips, he will most certainly die.  The other slaves pass by, not daring to suffer certain punishment from helping him.

The film is nominated for nine total Academy Awards.  Among them are Best Picture, costume design, production design, film editing and adapted screenplay.  Steve McQueen is up for best director.  Among the acting nominations are Chiwetel Ejiofor for lead actor, Lupita Nyong’o for supporting actress and Michael Fassbender for supporting actor.  I doubt 12 Years a Slave will leave the award ceremony empty handed.

12 Years a Slave is one of those rare films where everything comes together perfectly under Steve McQueen’s direction.  The sets, costumes and cinematography hearken back to antebellum south.  The story feels very honest and faithful to a dark past, and yet fresh in this modern age.  Best of all, the acting is exquisite all around.  Ejiofor lets us perfectly understand Northrup, his fears, frustrations and helplessness, and leads us through this story with grace.  Nyong’o brings heartbreaking despair to such a sympathetic character.  And Fassbender portrays a frightening, powerful force that feels striking and more real than we would ever want it to be.

“In his own time, the Good Lord will manage them all.  The curse of the pharaohs was a poor example of what waits for the plantation class.”