The Prince of Tides

For a while, The Prince of Tides is a film with potential.  The central character, Tom (Nick Nolte) is called upon by a psychiatrist to recount his family’s troubling past after his twin sister, Savannah (Melinda Dillon), attempts suicide, for a second time.  Back home, he and his wife are having marriage issues and their three daughters are slowly growing old enough to see the wedge between their parents.  Through psychiatric sessions with Susan (Barbra Streisand, who also directs the film), Tom recalls some painfully repressed memories from deep within.

The most poignant scenes are Tom’s flashbacks to his childhood.  These are testimonies of the physical, emotional and verbal abuse he, his siblings and mother suffered from his father.  They show the hierarchy of the family, and how it shifts as we see the children grow.  While the mother is mostly helpless, Tom’s older brother Luke becomes the only one able to challenge the domineering father and protect the rest of the family.  It seems Tom has always been lumped in with the women, being the younger son and suffering one tragic night that the family promised to never speak of again.

All those things could make this film a great depiction of soul searching, recovering from a horrific past and what’s left of the broken family helping each other rise up from the ashes of a terrible childhood.  But all that is pushed to the background when a love affair kindled between Tom and Susan becomes the main focus.  Not only is this an unethical way to treat a patient, but this stirs up after Tom’s most heartbreaking and shocking revelation.  Frankly, I found the whole love story very unsettling.

If Tom had been played by any less talented actor than Nick Nolte, this film would have been intolerable during the more intimate scenes with Streisand.  At some moments, my husband and I just groaned and cursed the film every time Streisand’s face was attempting some sort of emotion.  The only thing that kept us from clawing out eyes out was the camera graciously cutting back to Nolte, who was convincing and had won over our hearts.  His performance brings out a raw feel to deeply repressed pain.  Between his vulnerable moments, he uses his southern boy charm and wit as a shield.  At his best moments, he can turn that wit on it’s head and pin people against a wall in the most amazing way.  They way he can hold that violin hostage was amazing.

The biggest mistake of this film is letting the affair take over.  No one wants to see Barbra Streisand in heat.  I began to wonder how exactly she was directing herself, was she trying to be sexy, vulnerable, lonely, fragile or just terrible?  Having never read the novel by Pat Conroy, I don’t know to what extent the character of Susan is needed, or how prevalent the romance is.  Somehow, I feel that the novel focuses on Tom’s family and their issues better than the film does.  What a shame.

“TV’s broken you son of a bitch.  Now you can watch your kids blow out their candles.”

After Alex commits suicide, his old friends from college get together for a weekend after his funeral.  They discuss the past few years, what they do, what they wish they did and where they wish they could be.  Some have families, others prestigious careers and some haven’t amounted to much.  They discover that what they really need is just each other. 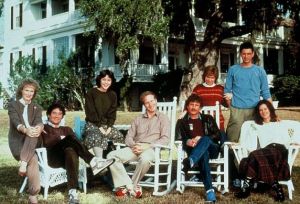 Yes, that is so vague and yet it seems like I’ve given away the ending.  This film is so full of rich characters and ideas that I’ve given away nothing.  At times it’s like the Breakfast Club’s twenty year reunion, but there’s more to it than that.

Most people have a group of old friends that try to get together now and then but slowly drift apart.  This one includes Jeff Goldblum as a journalist for Time Magazine, Tom Berenger as an actor in an action television show, Mary Kay Place as a disenchanted lawyer, Glenn Close and Kevin Kline are a happily married couple and William Hurt as a former talk radio personality.  Like a whole fruit basket from one college.  Throughout the weekend, new motives are revealed and old histories spark new life.

The topic of their late friend is touchy.  There are slight images of how each of them grieves their friend, whether crying alone or making a joke they immediately regret.  Eventually, they’re able to talk about him and bring new life on to themselves at the same time.

The soundtrack to this movie is wonderful.  Just a few artists featured are The Temptations, Three Dog Night and Aretha Franklin.  Maybe I’m going on about the music since I’ve been watching films from the ‘30’s lately.  Still, I don’t know anyone who hates good old classic rock from the ‘60’s.

On the surface, you could think this would be a great movie for when old friends get together, but you might just end up questioning which of your group will off themselves first.  No, it’s hard to suggest a good setting for The Big Chill, but I encourage you to give it a try.  Sorry to keep it so brief, but this is a difficult to review without revealing too much or getting all over analytical.

“Amazing tradition. They throw a great party for you on the one day they know you can’t come.”

“A woman’s whole life in a single day. Just one day. And in that day her whole life. ”

The film opens with a reading of Virginia Woolf’s suicide note as she fills her pockets with stones and walks into a river to drown herself.  The tone is firmly set.

In The Hours, we see three different days for three women spread over sixty years.  There’s Virginia Woolf (Nicole Kidman) in the middle of writing Mrs. Dolloway.  In 1951, Laura Brown (Julianne Moore) is a housewife on the verge of a complete breakdown.  And in 2001, Clarissa (Meryl Streep) is planning a party for her dear friend and writer, Richard (Ed Harris) who is dying from AIDS.  They’re connected by Virginia’s novel and the issue of suicide, in one way or another. 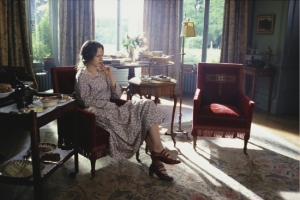 I would like to to call this a “woman’s issues film”; the name sounds horrible, but this isn’t stupid or romantic like a chick-flick nor is it estrogen fueled sap like a Lifetime movie.  The problems these women face may look trivial at first, but the utter loneliness and despair within Laura or the need Clarissa has to take care of Richard, these problems can’t be solved with a shopping spree.  Some may be completely bored by this film, the talk is quiet, not a lot of action and there’s a need to read everyone’s faces and decipher the tone of their voice.  Others (myself included) will be enthralled, the characters are fascinating, full fleshed for all their good, bad and upsetting traits and their issues are genuine and personal.  They won’t cause the world to stop turning (and they know it), but in a moment everything can be turned upside down or lost.  That simple truth is what makes this pull on your heart and maybe even donate some tears.

Kidman’s performance as Virginia Woolf is amazing. This is Nicole like we’ve never seen her before: with frumpy hair, in an shapeless floral sack-dress.  I honestly had to double check the IMDB page to make sure it really was Kidman, that fake nose went a long way.  There’s more than the costume and makeup, but the way she can loose herself staring into space, the intrigued look as she studies a dead bird, it’s suddenly all Woolf and Kidman is nowhere in sight.  That’s what the Best Actress is all about.

This can be a very hard film to get through.  Despair and loneliness are not glossed over and suicide can be a tough subject to tackle.  It is worth the view, but don’t go it alone with a pint of ice cream, it isn’t that kind of girl movie.  You might be in real need of a hug.  At the heart of this film, a sad, sad truth is brought out I only wish were not true: “Someone has to die in order that the rest of us should value life more. It’s contrast.”

The film takes place in the aftermath of tragedy.  Older all-star son, Buck, was killed in a boating accident and surviving brother, Conrad, blames himself so harshly that he tried to commit suicide.  After being released from the hospital (we assume for psychological problems, but it’s never explicitly revealed), Conrad and his parents have trouble communicating and moving forward.  Everyone is walking on eggshells and so afraid to hear each other’s thoughts their house feels like a hallow cave.  The warmth of love and laughter has been removed.

Conrad (Timothy Hutton) is such a desperate character.  He’s about seventeen, has swim practice every night, sings in the choir, and has trouble talking to girls on top of all his family issues.  The performance is painfully honest and beautiful as Conrad becomes stronger and starts to accept his lot.  Hutton’s win for supporting actor is well deserved.

The relationship between father, Calvin (Donald Sutherland) and son is healthy.  They can talk, but there isn’t a desperate need to between them.  They’re able to bond and find comfort in small things, like getting a Christmas tree.  In the beginning, Calvin asks his son if he’s given any thought to seeing a shrink.  He never pushes one way or another, there’s simply support of his options and room to breathe.

If that conversation had been between mother, Beth (Mary Tyler Moore) and son, I doubt Conrad would’ve ever seen a doctor.  Since Buck’s death their relationship has been very hostile, and Conrad even believes that his mother hates him.  Beth and her son cannot talk at all, not even about something as breezy and trivial as how their day was.  As Conrad makes progress with Dr. Berger, he tries to include his mother more, but they’re so awkward it’s painful to see Conrad try to break through the wall his mother has put up.  We start to question who needs help most.

Now many people will say that Ordinary People is about teen suicide, family tragedy and all that juicy stuff.  I believe the core of the story is something deeper that people can’t just read in the papers.   There’s a unique courage that builds in Conrad, the kind one needs in order to reach out for help and let life move on.

It’s humbling and scary to confide in a stranger about the horrible things you’re feeling in your life.  The scenes between Conrad and Dr. Berger (Judd Hirsch) get deeper, more revealing and dramatic with every visit.  It’s almost beautiful how Conrad starts to blossom and grow from shy and disturbed to confident and even able to smile.  Sometimes a boy’s best friend is his psychiatrist.

I’ll warn you, Ordinary People isn’t a feel good breeze to just sit back and zone out to.  There’s too much deep conversation, painfully pregnant pauses and family issues for that.  But it’s worth the view if you’re up to the challenge.

“A little advice about feelings kiddo; don’t expect it always to tickle.”