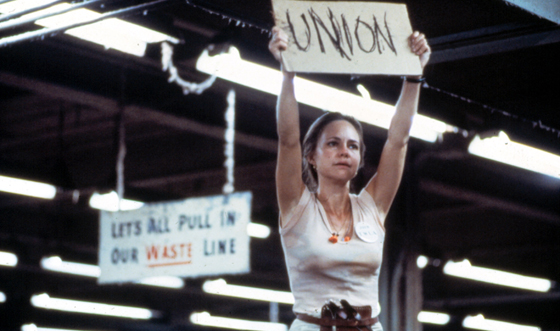 In 1974,  union organizer Eli Zivkovich came to Roanoke Rapids, North Carolina, met Crystal Lee Sutton and together they got the local overworked and underpaid textile workers to join the Amalgamated Clothing and Textile Workers Union.  The film Norma Rae tells their story, borrowing some harrowing true events and adding the Hollywood touch.

Right away, we’re shown that the factory is a horrible and monotonous place to work.  Unfortunately, it is the town’s main source of employment that the people cannot do without.  The machines are so loud, they’re causing Norma Rae’s mother to go deaf.  The older and less healthy people must stand for hours, no rest no matter how bad they feel.  They break their backs just to keep the only job around, but the pay is terrible and the whole town seems to have financial struggles. 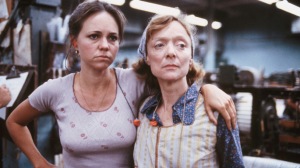 Though Norma Rae (Sally Field) has many faults, we clearly see that she is too smart to be stuck in chump job like this.  She moves her way up in ranks by complaining to the management about needing longer breaks and a feminine products dispenser in the ladies room.  They know she’s got a big mouth and they want her to shut it.  But her new, higher paid position is to critique and make sure the workers are keeping up to speed, and that doesn’t make her a popular person to be around.  Norma Rae is a single mother with two children, but she doesn’t need a wedge coming between her and a town of workers, including her own parents.

When Reuben (Ron Leibman) comes to town trying to urge the under appreciated factory workers to push for unionizing the factory, he’s not exactly welcome.  In this little Southern Baptist town Union seems to just mean Trouble and they think they don’t need some New York city boy barging in trying to fix their lives.  But Reuben’s concern is sincere and it’s only Norma Rae who listens to him and realizes how much better off the whole town would be with a union.  She and Reuben start leading a fierce campaign to unionize the factory with Norma Rae slowly recruiting more and more people as they realize how much the factory takes advantage of them.

Sally Field won Best Actress for her title role as Norma Rae.  She portrays Norma Rae as a bluntly honest, passionate and hard working woman who sticks out in a town where she could have easily disappeared into the woodwork.  I love how refreshingly honest Norma Rae is with the mistakes in her life, when she runs into her youngest child’s father in front of Reuben, she doesn’t sugar coat or dismiss the story.  Instead, she seems to embrace the moment of shame and it becomes a moment to share and bond.  Later, in the iconic scene where Norma Rae holds up the cardboard sign, Field seems to fully transform her from a little redneck woman to a strong, defiant fighter able to lead he fellow workers.  And when she trying to break away from the men trying to put her in the police car, Field accidentally broke one of the men’s ribs during filming.

The film has a great mix of drama, inspiration and boundary breaking to appeal to a wide audience.  Those who enjoy films with a strong female role will love Norma Rae.  If you’re like my sister and have a love for strong Southern women, this is like Christmas.