One of the most iconic films of the seventies is Saturday Night Fever.  With its numerous dance scenes and colorful club scenes, this film immortalized the disco era.  Its soundtrack was the highest selling until Michael Jackson’s Thriller.  And it was the debut of many young actors, including John Travolta.

John Travolta stars as Tony Manero, a nineteen year old kid in Brooklyn who lives for lighting up the dance floor on the weekends.  Working at a small hardware store, he has no higher aspirations but dancing in disco clubs and making it with girls.  In his spare time, he goes to a dance studio to work on his moves for the upcoming competition.  He dumps his partner Annette (Donna Pescow), the girl who always hangs around him and his friends, for a girl with some different moves.  Stephanie (Karen Lynn Gorney) is planning on moving to Manhattan and is already working there, hobnobbing with some big names.  She is more cultured and ambitious than Tony and isn’t afraid to let him know it.  But the more the two clash, the more they connect, and not just on the dance floor. 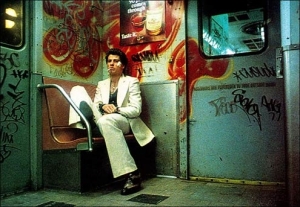 While most people will instantly recognize the music and that white suit with fondness, many might not expect the film to become so gritty and dark.  That’s right, Saturday Night Fever is far from a feel good dance flick.  Throughout the film we are shown an increasingly dark side of living for a weekend full of dancing, booze and girls.  The car the guys drive is where they take girls they just met out for a quick throw while parked on the curb.  Tony’s family has fallen on hard times and isn’t very supportive of his partying lifestyle, even less so after his older brother decides to leave the priesthood.  And one of Tony’s friends, Bobby C (Barry Miller), gets more and more desperate for friends and advice after he gets a girl pregnant.  These Saturday nights can get pretty rough.

At the Academy Awards, Saturday Night Fever was only nominated for one Oscar.  A very young and lean John Travolta was nominated for best actor for his portrayal of Tony.  Between the intense choreography and more goofy moments (“Attica! Attica!”), Travolta molds Tony into more than a dancing kid.  He turns his lack of ambition into teenage angst and his rocky relationships into anger and finally a catalyst for change.  There is so much more dimension here than you’d expect from a disco crazed kid from Brooklyn.

While the Academy had little love for the film, it is remembered as an essential.  It is a part of Roger Ebert’s great movies lists, as well as on the AFI’s 100 Songs list.  In my mind the best dance flick of all time.  Most of all, I love the way it preserves the disco era in all its colorful, polyester glory with a dark and robust story about so much more than dancing.

“My girlfriend, she loves the taste of communion wafers.”