One Foot in Heaven

One Foot in Heaven is the story of a minister and his family over the years as they move from parish to parish.  William Spence (Fredric March) was originally studying to be a doctor when he realized his true calling was to become a Methodist minister.  This comes as quite a surprise to Hope (Martha Scott) and her parents just shortly after her engagement to William had been announced.  Nonetheless, she stays with Will, even as they move from their home in Ontario to Iowa. 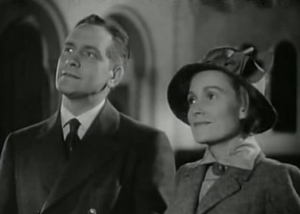 Soon, Hope realizes what a huge shift in lifestyle she will have to deal with.  Their first house as newlyweds is a dump provided by the church community that she cannot decorate to her pleasing for fear of upsetting those who have taken care of it.  As years pass and the family grows, money becomes tighter.  For a while, it seems that the fashion is just to the courthouse to get married rather than seeing a minister.

As the family moves all around the country, the children grow and realize the stress of being the minister’s children.  By their father, they are expected to be a good example for the rest of the young community.  They are well aware that they represent the church and their father’s work, but it can be hard for them to just be normal kids.  When Eileen (Elisabeth Fraser) is in her teens, she feels left out that she isn’t allowed to go to dances.  As a young man, Hartzell (Frankie Thomas) is unsure of himself in a modern dating situation. 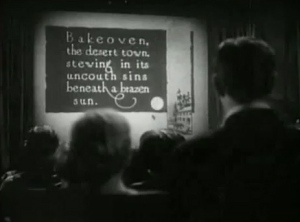 One of the best scenes in this film is when Hartzel is just a boy, after he is caught exiting the movie theater, Will takes him to the movies to explain to his son how immoral they are.  They see a silent picture called The Silent Man, a good old western.  The theater is full of the town’s children who aren’t sure how to react seeing the minister at the movies.  Will takes the first chance he sees to teach his son about the immoral behavior on the screen once the outlaws are shown whooping it up in a saloon.  As the film goes on, the kids in the audience boo and hiss at every dastardly move the villain makes and cheer for the dashing hero.

By the end of the film, Will sees that the film is not glorifying any bad ideas, but in fact has a good moral.  Even better, the children in the audience are obviously understanding that, distinguishing the good and the bad with their boos and cheering.  Afterward, Will is inspired to preach about being more open minded about new ideas emerging in the culture.

Later in the film, Will is minister to another church full of rich snooty people who only use the church to improve their social status.  They especially love being in the choir, just to be heard and seen at the front of the church.  It’s obvious that they do not donate like they should, since the house the Spence family lives in is unbelievably leaky.  One day, Will hopes to rebuild the whole rickety church and even add a youth recreation center, but first he has to fix the church from within the community.  Rather than be angry and ask for more donations, Will finds more creative ways to quietly punish the old crones by forming a children’s choir to give them a break during the summer.  You may be able to guess how the rich choir ladies react to this isn’t exactly wholesome.

The whole film is a wonderful display of heartfelt and realistic approaches to modern Christianity, as well as pointing out the hypocrisies present in many communities.  Will and his family are not perfect, but they are good people who live well for each other and for the parish they help represent, no matter how humbly they have to live.

I strongly suggest this film for anyone who considers themselves part of a religious community.  Some of the struggles the Spence family faces are not too far from what many people may be struggling with today.  Not everything they do has to do specifically with religion and the church, but simply living in an ever changing community.  Regardless of creed, everyone today can recognize that old ideas cannot always meet the new needs of the youth.  Though this film is seventy years old, yet it holds enough merit for the new generations who have graciously put it on YouTube for all to see.