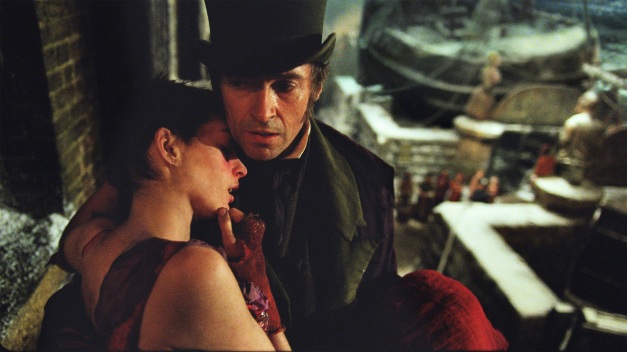 Those who have been reading my blog for awhile may have noticed that my tolerance and appreciation for musicals has gotten better.  I am much less likely to roll my eyes or groan in pain whenever films break into an elaborate song and dance number.  In fact, apart from awkward singing conversations, the musical aspect was one of my favorite things about Tom Hooper’s Les Misérables.

The film is a musical form of Victor Hugo’s novel that has come from page, to stage and to screen.  Hugh Jackman plays Jean Valjean, who was harshly sentenced to years as a slave for stealing bread for his sister’s child.  He breaks parole and makes a new life for himself, but always fears his real identity will send him back to prison.  Russell Crowe plays Javert, the inspector who will uphold the law dutifully and chase Valjean to no end.  Along the way Valjean’s life is touched and changed by a kind bishop, Fantine (Anne Hathaway), her daughter Cosette (Isabelle Allen as a child, Amanda Seyfried as a young woman) and the young men pushing France into revolution.

The opening longshot, beginning under water and rising up to see a tipping ship being pulled by hundreds of slaves in a storm, absolutely astounded me.  I felt my jaw literally drop and my expectations for a beautifully shot film rise.  Unfortunately, that was the visual high of the film.  I kept seeing glimpses of beautiful sets, but they were all obscured by the large singing faces that dominated the screen.

I understand how close-ups are something you just won’t get if you see a stage production of Les Misérables, so why not enjoy them in a film production?  However, it’s too much and too often.  I’m the kind of person who prefers the back of a classroom so I can see all my setting and I can have plenty of space between myself and those facing me.  At one point during the film, I realized I had my feet on the seat in front of me, trying to push myself back from Jackman’s singing face on the screen.  It was too much and too close for comfort.  And for those who will defend that he’s not a bad face too look at, maybe so, but I never want to be so close that I can see snot glistening in his nostril.

Despite being in their faces too much, I enjoyed all the different actors, their characters and singing talent.  Jackman’s leads the film both musically and emotionally, fitting perfectly into Valjean at the different stages in his life.  Helena Bonham Carter and Sacha Baron Cohen are a fun swindling duo who add some much needed comic relief.  The child actors, mainly Isabelle Allen and Daniel Huttlestone, add vocal range and melt our hearts with their sad stories.  While Russell Crowe certainly isn’t the best singer in the film, he isn’t awful, as some sources led me to expect.  Besides, if any character is going to sound like he’s got a stick up his ass, it’s going to be Javert.

Anne Hathaway gives the strongest performance in the film.  Even before she is cast out into the street, she shows us what a vulnerable and fragile person Fantine is.  Her shining moment is singing I Dreamed a Dream.  The whole song is done in one continuous shot, always keeping Hathaway’s face toward us and in frame.  This moment, her singing, her face feels like an overwhelming wave of crushing despair and sorrow.  It was the one moment in the film that brought tears to my eyes and I heard a few sniffles around the theater.

Les Misérables is nominated for for eight Academy Awards.  Along with best picture, the film is competing for best sound mixing, original song, costume design, hair and makeup design and production design.  In the acting categories, Hugh Jackman is nominated for lead actor and Anne Hathaway is nominated for supporting actress.  I believe Hathaway will come home with the Oscar, but that may be the only one for Les Mis.

While Les Misérables is well done film with a beautiful soundtrack, I found the whole experience a little disappointing.  It was far too long.  I found myself checking the time only an hour into the film wondering how the last hour had lasted so long.  Unless you are really into checking out every last detail of someone’s face, the film is visually lacking.  Still, as far as epic musicals go, Les Mis is good, will draw you in emotionally, give you some engaging characters and leave you with a good tune in your head.

“Suddenly the world seems a different place, somehow full of grace and delight.”