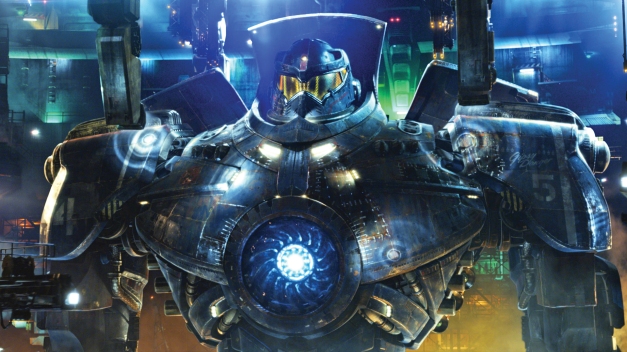 This may have been the most fun I’ll have at the movies this summer.  In the moment, Pacific Rim is awesome.  Giant robots fighting giant alien dinosaur looking things is as epic as it sounds.  This feels like someone took a kid’s daydream from Power Rangers and Godzilla, amped it all up into one visually fantastic ride.

From what I gathered, a portal to another world or universe opened at the bottom of the Pacific Ocean and Kaijus (the giant dino-monster things) came out and started attacking humanity.  In order to fight the Kaiju, the human race has come together to build giant robots manned by at least two compatible individuals.  Sure, making giant fighting robots may not seem like the most practical idea, but it is the most entertaining.  As more and more fearsome kaiju are passing through the portal, a drift pilot with a tragic past may need to get back into a robot and save the world.  It sound ridiculous, but in the moment, you eat that shit up.

Oh, and along with all that is a very fun side-plot: Dr Newton Geiszler, a scientist obsessed with the Kaiju (wonderfully played by Charlie Day), has figured out how to drift with one.  Sorry, drifting basically means two beings connecting and sharing a brain.  It’s how pilots make the giant robots move and it’s how Geiszler learns vital information about the Kaiju.  Day’s character and his antics are a very fun slice of comic relief and he makes a scientist seem like a rockstar.

Pacific Rim is one of those films you really have to relax and let all your inner inhibitions go.  It is so far fetched, with some major glaring plot holes, but just let it go and you will have so much fun.  I mean, you’re watching giant robots fight giant alien-dinosaurs and it’s all so artistically beautiful.  I loved how the Kaiju seem to have glowing properties, it all flows well with the setting.  I sense Pacific Rim could be up for the visual effects and art direction awards come Oscar season.

If you ask an average kid to name their favorite X-Men character, odds are it’s Wolverine.  Not that he is the best, lets not open up that huge nerd-fueled debate, but as far as the movies are concerned, he gets the most screentime and one of the best actors.  Here, Hugh Jackman is back in his title role, but not with any other familiar faces, yet, it works.

The film starts with Logan (aka The Wolverine) held captive by the Japanese during the end of WWII, near Navasaki.  As sirens wail, Logan protects a young soldier, Yashida from the nuclear blast.  Seeing Logan’s healing power, Yashida spends his life obsessed with the idea of immortality.  In the present, Yashida is a wealthy head of Japan’s biggest tech company and on his deathbed. Yukio (Rila Fukushima) brings Logan to Japan, claiming to want a last goodbye, but Yashida is really seeking a way to take Logan’s immortality and use it himself.  However, when Yashida dies, an internal power struggle send thugs after his granddaughter, Mariko (Tao Okamoto).  Logan must protect her, even as his healing powers fade.

Last June, I said that I enjoyed Iron Man 3 because it was so character driven, the same goes for The Wolverine.  Superhero movies that are more than CRASH, BOOM, PUNCH are the best.  While we still get a lot of action and fighting, there is enough look at Logan as a tortured, lonely person that keeps me on board, wondering what will motivate him next.

What I didn’t expect, was a strong martial arts film.  With the majority of the film set in Japan, we get lots of samurai swords and ninjas running along the rooftops, they seem to blend well with Logan’s brash claws.  Logan is always an outsider, this just seems to attenuate?? it.  And thankfully, the girls can kick ass just as well as the guys.

And a last word of warning, if you’re one of those who bolts out of the theater once the credits start, oh, you’re missing one of the biggest X-Men treats yet!

The Way, Way Back

I walked into this film blind, and by choice.  All I knew was that this was by the same people and studio who made Little Miss Sunshine, one of my all-time favorite movies.  Once again, they led me down a wonderful path.

The Way, Way Back is many things.  It’s part coming of age story, part restrained family drama, set within a suck-tastic summer story with an awkward teenage protagonist.  Duncan (Liam James) is fourteen years old, about to spend a summer with his mom (Toni Collete) and her boyfriend Trent (Steve Carell) at Trent’s beach summer home.  It’s a quiet little beach town that adults think kids can have fun at, but really, it’s just spring break for the adults.  While they drink and party with the other adults, the kids are often alone, and unless they have a bunch of friends, brooding over what a raw deal they’ve got.

Eventually, Duncan escapes to the local water park and becomes an employee.  This becomes his the only place he is happy and a double life.  Though his mom asks, he never tells her where he spends his time, and she doesn’t pry.  As Duncan gets more involved at the park, and comes out of his shell there thanks to the sarcastic park manager, Owen (Sam Rockwell), things get messy back at the beach house.

From the very first scene, we are drawn in and taking sides.  As they’re driving to the beach town, Trent asks Duncan, as the rest of the passengers are sound asleep, how he rates himself on a scale of 1-10.  Duncan timidly gives himself a six, while Trent harshly dubs Duncan a three.  Who tells that to a kid?  Trent tries to make it sound like Duncan should try to improve his number over the summer, but we see Trent just as Duncan does, an asshole who doesn’t care about anyone but himself.

I doubt this will gain much recognition during Oscar season, it doesn’t have the level of heart and charisma that Little Miss Sunshine did.  However, it is very good, heartfelt, fun and one of my favorite films of the summer.  Allison Janney put on my favorite performance of the summer as meddling, middle aged lush next door, and I look forward to Liam James’ career.  Anyone who can remember how awful it was to be fourteen can identify with Duncan, and wish they had such a great summer job.