Of all the films based on Stephen King’s work I have seen, The Shining has to be my favorite.  Purists can scoff all they want, complaining that Stanley Kubrick didn’t stay true enough to the novel.  I must say that both works are amazing in their own ways.  Read The Shining during a snowy winter, you might not sleep well for a while. However, the horror that engulfs the Torrance family shown in the film, is like no other movie I will ever see.

When Jack Torrance (Jack Nicholson) becomes caretaker for the Overlook hotel during the winter, he and his family make the long journey through winding mountain roads to move in.  For five months, they will be the only living people within the huge building.  As an aspiring author, and recovering alcoholic, Jack welcomes the loneliness, hoping it will fuel his focus on writing.

For his wife, Wendy (Shelley Duvall) and son, Danny (Danny Lloyd), cabin fever is not the only fear within the Overlook.  Little Danny has an uncanny ability to sense and see things, brought to him by Tony, whom his mother thinks is an imaginary friend.  Before even seeing the Overlook, Danny is granted horrifying visions of blood flowing out of an elevator and flooding the hotel halls.  Inside are memories of madness and murder that can manifest and take hold of the new caretaker.  Danny’s gift, called the shining, may be the only thing that keeps him safe. 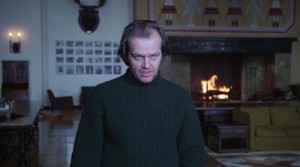 One thing that always strikes me about The Shining is how huge the Overlook hotel is.  Outside, its size is overshadowed by the mountains and views around it. However, once we see the inside, it makes everyone seem so small.  As we watch Danny ride around on his big wheel, the hallways seems to twist and continue for miles.  It seems so easy to get lost in there, just like the hedge maze outside.  The cinematography works wonders here, framing every shot perfectly to make me feel that this family has been swallowed up by a monstrous hotel.

My favorite scene of the film takes place in that grand parlor that Jack has set up as a writing space.  After a scare and some shocking discoveries, Wendy has had enough and wants to take Danny to a doctor, but she must first discuss it with her husband.  Since he is not in the room, she takes a peek at what he has been writing, only to find one maddening sentence typed over and over.  Jack comes in, making her jump in fright.  What happens next perfectly shows their opposing characters.  Wendy professes weakly through tears that she wants to take Danny to a doctor.  To counteract that, Jack mocks her, gets angry and slowly leads her around the room, him always advancing while she backs away keeping a distance between them.  It’s like a very tense waltz, where Jack is in complete control, even though Wendy is holding a bat the whole time.  We can never imagine her landing a decent blow against Jack, especially the pathetic way she holds that bat.

God, I really do love The Shining.  It’s creepy, visually amazing, intense, grows on the characters and has some amazingly freaky moments that always scare me.  There are big moments that  rely on things you cannot even begin to explain, but they are so good that even party-poopers won’t care.  Blood flows out of an elevator, a barkeep and party appears out of thin air, those creepy twins pop up now and then, room 237 is one of the creepiest moments and then there is the guy in a dog suit.  And that last half hour climax of the film is something I can never turn away from.  If you have never seen The Shining, it is a must-see, especially around Halloween.