The Treasure of the Sierra Madre

Based on the novel by B. Traven, The Treasure of the Sierra Madre is a classic tale of adventure that follows three men digging for gold in the wilds of Mexico.  The film opens with Dobbs (Humphrey Bogart) and Curtin (Tim Holt) broke in Tampico and falling victim to labor scams.  When they hear an old man telling stories of prospecting, their dreams fill with piles of gold.  They find the old man, Howard (Walter Huston), the three men set off into the wilderness in search of gold.  They find it, lots of gold, but the more they find the less they can trust each other.  It isn’t long before paranoia and suspicions start to tear the men apart jeopardizing both lives and fortunes.

This film is one of the great achievements by the legend, John Huston.  In his entire career, he was nominated for Best Director five times.  TOTSM was his first nomination and only win.  He also picked up his only screenplay win and his father, Walter Huston won Supporting Actor in his portrayal of the wise old prospector.  Considering that TTOTSM is currently ranked as # 38 on AFI’s best film’s list, this film has cleaned up pretty well. 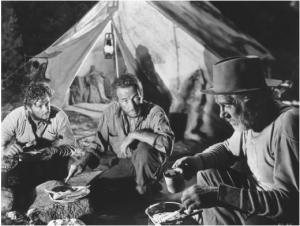 It’s very deserving of all those recognitions.  From the beginning, we become invested in the story and as the stakes get higher with the piles of gold, we start biting our nails.  I loved this movie so much that by the climax I was yelling at Bogart and nearly had a fit when…well, I might’ve said some bad things about Gold Hat.

Bogart plays wonderfully shaggy, greasy, greedy, hotheaded and suspicious Dobbs.  When Curtin stumbles upon Dobbs’s hiding place for his gold, Dobbs nearly risks his life to check his stash.  One of my all time favorite Bogart moments comes when Dobbs is alone in the woods at night.  We watch his greed slowly turn to madness and the way he talks to himself is just mesmerizing in such a creepy way.

Of course, Dobbs would’ve snapped a lot sooner if it hadn’t been for Howard.  He’s the brains of the operation, knows where to find the gold, how to dig for it and becomes the neutral third party that can keep the peace.  He tells Curtin and Dobbs, “Without me, you two would die here, more miserable than rats.”

The most important thing Howard tells Dobbs and Curtin are the dangers of prospecting.  Not anything like lack of water or mines caving in, but greed.  Howard makes it sound like an addiction or gambling.  “Like roulette. One more turn, you know. Always one more.”  But of course, the young men don’t understand and can only dream of their piles of gold growing bigger and bigger.

This film is a real treat.  There’s plenty of action and gun slinging.  The story has a good heart without preaching.  At times, when the banditos are running around, it has a great cowboys-and-Indians feel that some westerns just can’t grasp right.  I recommend this for everyone, it doesn’t feel outdated at all, I promise.

Oh, and let’s not forget: “Badges? We ain’t got no badges. We don’t need no badges. I don’t have to show you any stinking badges.”

Sam Dodsworth (Walter Huston) has just retired from his automobile business and plans on traveling Europe with his wife, Fran (Ruth Chatterton).  From the start, it seems they have different ideas on how to spend retirement.  Sam wants to see and do everything; he gets so excited over all of England’s history while they’re still on the ship.  Fran however wants to be very social and hob-knob with high class society where ever they go.  She starts to become weary of her age, gets too social and starts flirting with every rich young man she finds.  Poor Sam is oblivious to his wife’s deception for a while, but once it is discovered he realizes how far apart they’ve drifted.  Is there any hope in their marriage?

That all sounds kinda melodramatic, doesn’t it?  Well, it’s not.  Sam isn’t the kind of sap that could be stuck in a soap opera.  He’s a good old American hard worker who’s built a company for the past twenty years and brought all the bacon home to a wife he dearly loves.  Even in his middle age, he’s energetic and passionate.  When he see’s a light in the distance on the ship, he runs to his wife and her latest dance partner to have them see too.

Problem is all of that bores Fran to pieces.  She doesn’t care for any of the great monuments, museums or history around her, she just wants to party like it’s 1939.  That means dressing up in her best gowns, sipping drinks with the rich and dancing with younger men.  She seems ashamed of her husband for wanting to run around and sit in street cafes like an American hick.

I rather enjoyed seeing a woman’s mid-life crisis at work.  Usually we only hear about men in a new sports car looking for younger women and claiming to be only thirty-five.  Women can sink just as low, and in some cases it just seems shallow and ungrateful.

My favorite scene has to be when Fran meets her hopeful mother-in-law-to-be.  She’s an old hag of a woman (her son can’t be much older than twenty-five) with a big shiny cross hanging around her neck and boy does she put Fran in her place.  The old woman condones Fran for being immoral enough to plan a divorce and then asks her how much happiness she expects from the life of an old wife to a young man.  What an eye-opener!

Throughout the film, I just didn’t feel like I was watching some old, worn out crusty reel from the 1930’s.  The story honestly captured my attention; I was invested from start to finish cheering on Sam and detesting Fran.  There were no intrusions of random song or dance, thank heaven!  If you want to steer clear of theatrical performances and just want a great story, skip The Great Zeigfeld, Dodsworth is the one for you.

“You’ll have to stop getting younger someday.”