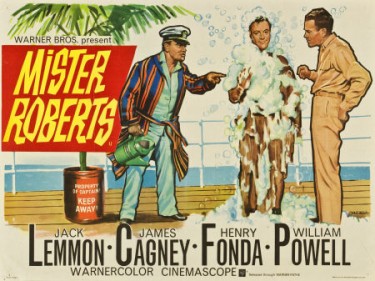 Directed by John Ford, Mister Roberts is a military comedy-drama set aboard a US cargo ship in the Pacific during the later part of WWII.  Captain Morton (James Cagney) is a tyrant regularly disciplining his crew over the tiniest infractions, including putting cigarette butts in his beloved potted palm tree.  As one sailor puts it, the palm tree is a reward “for delivering more toothpaste and toilet paper than any other ship.”  Life aboard “the Bucket” is less than glamorous, and Lt. Doug Roberts (Henry Fonda) wants to transfer to a battleship before it’s too late to fight.  He constantly writes letters requesting his transfer and describing the disharmony aboard the ship.  But with the Captain won’t let his letters go through.  He knows he has a good cargo officer and refuses to sign Mister Roberts’ transfer papers. 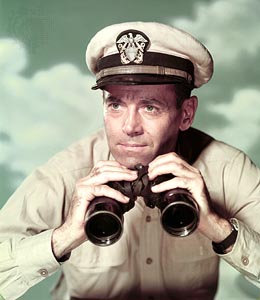 The sailors haven’t been off the ship in nearly a year and are getting anxious.  There are fun scenes where the sailors are using binoculars to spy into the nurses shower room on the nearby island.  When Ensign Pulver (Jack Lemmon) invites one of the nurses to the ship, the lengths he and Doc (William Powell) go to to find liquor for his hot date are hilarious and when it all goes south, the crew has one less thing to look forward to.

To help out his overworked crew, Mister Roberts strikes a deal the the Captain to not undermine his authority or send any more letters in order to give the men liberty off the ship.  The men start to think that Mister Robers has lost his backbone.  It’s only when the men realize the sacrifice Mister Roberts made for them, they thank him in their own way.

The majority of the film is a comedy.  The crew is full of fun and zany mishaps, from trying to get a date with the nurses to concocting pranks to pull on the Captain.  When they come back to the ship after their liberty, some bring their good time back with them.  They dance aboard the ship, wearing floral leis and some are so full of liquor they had to be carried aboard the ship in a net.  One man even brings a goat back with him, claiming it to be his new sweetheart.

Fonda portrays Mister Roberts as that person we all hope to have aboard our ship.  He’s caring, smart, always looking out for his crew and not afraid to stand up to unfair authority.  These people will get the credit they deserve eventually, and that’s something to smile about.

If you enjoy military comedies, a lighthearted drama or Henry Fonda, I completely recommend Mister Roberts.

“I forgot my motorcycle.”

Mystery, murder, laughs and love.  The Thin Man has it all and a dog to top it off.

When inventor Mr. Wynant hears the good news that his daughter, Dorothy (Maureen O’Sullivan) is getting married, he goes to fetch the savings bonds he’s been saving for her, only to find them missing.  After a fruitless search and a fight with his wife, she is found dead and he goes missing.  Poor Dorothy is worried sick about her father and asks an old friend of her family’s Nick Charles (William Powell) a former detective to help look for him. 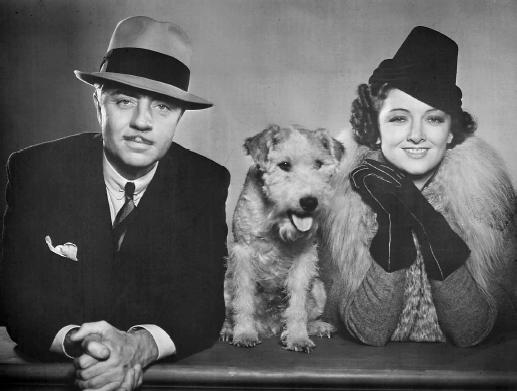 Now, Nick has been out of the detective game for a few years and he’s not willing to just go barreling into a murder case.  It’s really his wife, Nora (Myrna Loy) who convinces him to get involved with the case.  Her reason?  It’s all terribly exciting!  Of course, when things get dangerous she has her second thoughts, but Nick can’t back out.  That would be chicken.

Nick is an interesting fellow.  He’s cocky, smart and is usually three steps ahead of everyone, but when he isn’t his luck and quick wits make him seem like it was all part of the plan.  It’s always kinda fun how that just turns out.  His wife, Nora shares the same type of charm.  She’s always supportive, but often with a thin layer of sarcasm and can worry about her husband in dangerous situations.  Let’s not forget the baby in the family; the couple has a cute little dog, Asta, who accompanies Nick and even helps uncover some big clues.

The film feels like comedy noir.  There’s a good mix of crime, comedy, drama and mystery that keeps fresh and exciting until the end.  The great amount of comedy keeps the whole film light, but not flimsy.  And of course, Powell and Loy make a great duo any day as they did in many, many films.

I recommend this film to anyone who wants to see what a good comedy/mystery can be.  Today, this genre is one that isn’t taken seriously.  Ace Ventura could fit in this category.  And we’ve all heard of rounding up all the suspects for dinner to see who’s guilty, this film that scene best.

“That’s a girl with hair on her chest.”

Step right up ladies and gentlemen and see The Great Zeigfeld, the story of the life and work of the extravagant stage producer, Florenz Ziegfeld (William Powell).  Witness as he rises from a carnie at the world’s fair, peddling Sandow the strong man, to producing some of the biggest hits on Broadway and “glorifying the American girl.”  Be amazed as he finds new fortunes and love just to lose them, nearly to rock bottom and then regain anew by just being a fast talker.  The film is filled with reenactments of his greatest stage moments, some so fantastic it’s almost too much to capture on film.

Whew, don’t want to get carried away with that carnie voice.  But frankly, I was surprised at how much I enjoyed this film.  The way a Zeigfeld biography is intertwined with pieces of recreated stage performances is wonderful.   I wouldn’t classify this film as a musical, since the musical numbers are separate from the story.  The numbers are in here to show Zeigfeld’s work (you wouldn’t make a Van Gogh biography without showing a couple paintings right?) and what magnificent works he created! 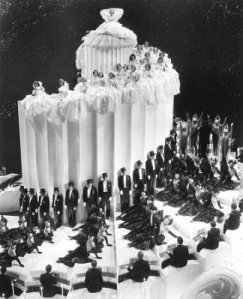 One particularly amazing stage performance recreated for the screen is the number “A Pretty Girl Is Like a Melody.”  The whole thing is on a rotating stage, with a gigantic silk curtain slowly rising as it turns to reveal more and more actors singing on the spiraling stairs.  Director Robert Z. Leonard wanted to make the whole scene one continuous long shot, like you would see it sitting in a live theater, but back then cameras could only physically hold so much film.  So Leonard created the illusion of one long shot, by zooming in on a key singer at the end of the reel and panning back out to start the new reel without the feel of a cut.  Hitchcock later used this technique in Rope.

I’ll admit, I had this sitting, in its little Netflix envelope on the table for almost a week because three hours in 1936 just sounded like a drag.  How wrong could I have been?  There’s a reason this won Best Picture.  William Powell and Myrna Loy are always worth watching and the story of Zeigfeld is entertaining to the end.  Luise Rainer deservingly won Best Actress and her famous telephone scene is wonderful.  If you enjoy the theater, it’s brought to the screen magnificently.  People must’ve gone crazy seeing some of the huge stage scenes back in ’36.  I was amazed just sitting on my couch seventy-four years later.  If you pick just one film from 1936, make it The Great Zeigfeld.

Here is the story of a newspaper trying to get out of libel suits and creating a love…rectangle?  Warren Haggerty (Spencer Tracy) is an important newspaper man and has called his wedding off once again because of a printed emergency.  His paper just ran a story about Connie Allenburry (Myrna Loy) that claims she’s a marriage breaker, now she’s filed a five million dollar claim against the paper.  His fiancé, Gladys (Jean Harlow), is furious that he’s put the newspaper before her once again.  Warren and his old writer friend, Bill Chandler (William Powell), form a plot where Bill will marry Gladys (just temporarily) so that he can be seduced by Connie and Gladys will catch them.  Surely, Connie will drop her claim after really being caught?  But it’s not that simple and unexpected sparks begin to fly. 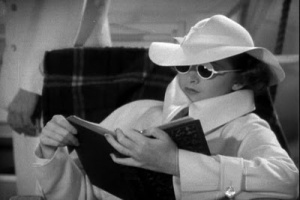 This film is a case of good ol’ classic comedy.  It’s never as outrageous or slap stick as Abbot and Costello or The Three Stooges.  Libeled Lady is the sort of ‘30’s comedy for an intelligent audience.  The most physical comedy we find is when Bill is fishing, and the dip is refreshing.

There’s also a good deal of romance, well, it’s a kind of screwball romance.  Characters pretend to be together and talk ridiculous mush while others must pretend to have no relationship.  When the real and unexpected relationships start to kindle, the audience may be conflicted.  Some oppose, knowing the whole scheme will be lost and others cry ‘yes!’ because Myrna Loy and William Powell are such a dreamy couple.

And that’s where we learn some fun facts about early cinema.  This is only the fifth of fourteen films where Myrna Loy and William Powell are paired up as a romantic couple.  We’ll see this again in The Great Zeigfeld later in the week.  At the time when this film was made, Jean Harlow and William Powell were a real couple and pushed for Harlow to play Connie, but MGM knew that audiences wanted Loy and Powell together (like an old-timey fantasy Bradgelina).

I think I’ve said before how I despise most screwball romantic comedies, but this I enjoyed.  It’s not too romantic, doesn’t try to be too funny and just doesn’t get anywhere near all those things that makes me hate today’s romantic comedies.  If you enjoy older film, classic comedy with a touch of romance then Libeled Lady is a perfect fit.  If you enjoy today’s romantic comedies, I encourage you to branch out and sample their previous generations.  It could be a refreshing break from Jennifer Aniston’s cleavage.

“She may be his wife, but she’s engaged to me!”