The film opens with Jerry (Cary Grant) lying to his wife, Lucy (Irene Dunne) about being in Florida.  At the same time, it seems that Lucy was out all night on the town with her handsome singing teacher.  Though both are innocent, they accuse each other of cheating and sort of dare each other to divorce.  “So go on, divorce me. Go on, divorce me!  It’ll be a pleasure.” 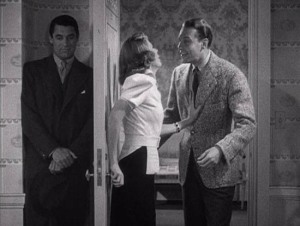 When the couple decides to split there are some things to divide up.  Who will get the couch, the apartment, the dog?  More importantly, who will win over the audience?  From that courtroom scene, where Mr. Smith (the couple’s dog) has to decide who to belong to, the audience it pulled to and fro to see who will make their tale wag more.  This whole screwball comedy feels like Cary Grant and Irene Dunne are competing for the most laughs and I love it, because that makes me the winner.

Cary Grant is hysterical in this film.  Between his playful antics with his beloved dog and the way he cleverly puts his leading lady over a barrel, we’re laughing with him most of the time.  The best parts need no lines.  When Jerry and his southern belle date sit down with Lucy and her homey farm boy, Jerry simply looks at his beautiful chick with a big cheesy smile and then to Dan as if to say, “My date is better than yours, I win.”  The tables turn when his date turns out to be a showgirl who sings and lets the fans blow her dress up like Marilyn Monroe.  Scandalous and embarrassing for Jerry, but he finds a way to get back on top by convincing Dan that Lucy loves to dance.

Irene Dunne seems to be losing in the first half of the film, with all the jokes on her.  In the second half she comes back to steal the show and it’s Grant’s turn to look like a fool.  When Jerry starts seeing an heiress, Lucy invites herself over to meet her family, claiming to be Jerry’s sister visiting from Paris.  She stumbles in, acting like a lush and completely embarrasses Jerry in front of rich, prospective in-laws.

The whole film is a good laugh and from the beginning we can guess the end, but I don’t care.  It was a fun ride, light and hysterical.  I recommend The Awful Truth for fans of Grant, Dunne and anyone looking for a laugh.

“I’m going out to get some popcorn and pink lemonade. I’ve just seen a three-ring circus.”