The Aviator is a biopic about Howard Hughes, the director, producer and aviator.  We first meet him (played by Leonardo DiCaprio) as a young man, stubbornly trying to direct his feature film Hell’s Angels. The movie is bigger than any film ever attempted before, way over budget and Howard keeps extending the project to get every detail perfect.  He even postpones production for eight months waiting for clouds for his dogfight scenes.

When Hell’s Angels is finally complete, his work with airplanes has just begun.  He starts breaking records, flying around the world and designing planes that look like cruse-liners for the sky.  All this, his films and his relationship with Kathrine Hepburn (Cate Blanchett) draw the spotlight to him, though he doesn’t want it. 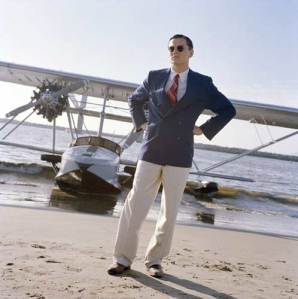 Howard’s greatest strength and weakness is his compulsive attention to detail.  It’s what makes his films spectacular and his airplanes amazing, but it starts to become a burden.  We notice how nervous and anxious he becomes around crowds, how he makes excuses to not shake someone’s hand and runs to the restroom to wash his hands with his own bar of soap.  As his fame rises, so does his OCD and the film becomes more than The Aviator, but an intriguing hidden life profile of Howard Hughes.

This role is one of DiCaprio’s finest.  He is practically  flawless here.  Every little tick about Howard is brought to life wonderfully and completely believable.  He’s perfectly eccentric but never feels over-the-top, even when he’s locked himself in his private theater naked and lining up milk jars of urine.  Just a warning, you will see his butt more than you care to.

At different points in the film, the color seems a bit askew, but that’s not a bad thing.  While watching, I thought the colors were beautiful.  They popped in a different way, like a classic art deco poster.  Later, I found out that Scorsese actually filmed each era to reflect how it would look in color film at that time.  As the film progresses into more modern era, the colors become more realistic.  But I did enjoy the turquoise peas.

One of my favorite scenes is when Howard finally gets his clouds to film the dog fight scenes in Hell’s Angels.  He and a whole fleet of planes are in the air, buzzing around the clouds to one of my favorite pieces of music:  Toccata and Fugue in D minor.  You can feel a real passion about Howard as he’s standing in the plane, craning and moving around with his camera trying to get every spectacular shot and angle he possibly can and yet all around him is absolutely beautiful.  I realize it’s all CG and special effects, but I’m a real sucker for it.

I truly enjoyed this film from beginning to end, and I usually shrug off biopics.  DiCaprio is great, Blanchett won best actress for portaying Kathrine Hepburn and Scorsese adds another great film to his belt and this was just the beginning of DiCaprio’s work with Scorsese.  If you have any interest in Howard Hughes, Hell’s Angels, miles stones in aviation this film will be a treat.

“The way of the future.”