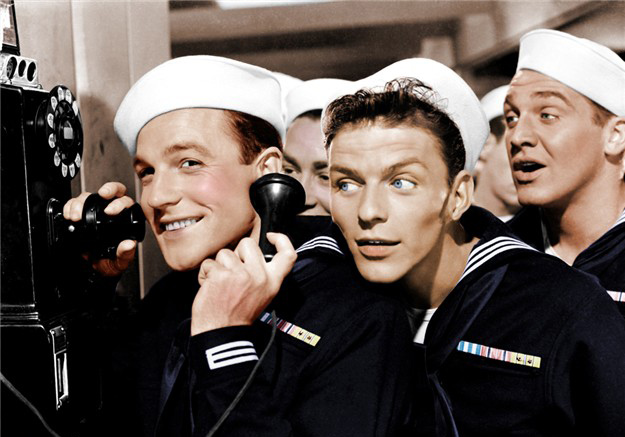 Usually, I don’t use the phrase “It’s cute” as as praise in my reviews, but Anchors Aweigh is different.  There’s a charming mix of fantasy, romance, song and dance in this story about two sailors, their quest for dames and the obstacles that help them find love.  With all the good laughs, fun song and dance scenes and sincere motives that move the plot, cute isn’t belittling, but a real compliment. 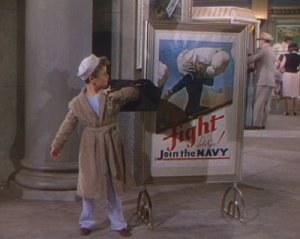 Decorated sailors Joe Brady (Gene Kelly) and Clarence Doolittle (Frank Sinatra) are given a four day leave in Hollywood.  Joe, with his reputation as a wolf, plans to have a good time with a sultry sounding lady, Lola.  Clarence is more timid and inexperienced and asks Joe to help him find a girl.  Meanwhile, Donald (Dean Stockwell), a little boy wanting to run away to join the Navy, has just been found by the police, but they can’t get him to tell them where he lives.  Joe and Clarence are brought into the station, hoping that the boy will talk to his idolized sailors.  Donald is thrilled to meet them, warming up especially to Joe and lets them take him home.  They get stuck watching Donald until his Aunt Susie gets home, to which Clarence doesn’t mind but Joe is missing his big date with Lola.  Turns out, Aunt Susie (Kathryn Grayson) is a beautiful young woman, struggling to become a singer and Clarence wants Joe’s help in wooing her.  Instead, they promise Susan an impossible audition with José Iturbi, a famous conductor and pianist working in Hollywood.

To most classic film fans, a movie with Gene Kelly dancing and Frank Sinatra singing is pure gold.  Though this was their first of the three films they would be together in, the two collaborate so well and are a real treat to watch.  In the scene where they improvise a song about Susie, their sailor-buddy antics peak enough to scare off a prospective suitor for Susan and keep the audience in stitches. 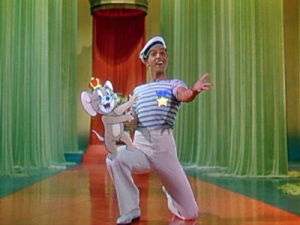 One of the best and most famous song and dance scenes, many people have already seen without even knowing it.  When Joe is telling Donald and his classmates a fictional story about how he got his medal, the film goes into a fantasy world where Kelly sings and dances with cartoon animals, including Jerry the mouse from Tom and Jerry.  It’s a very well done scene showcasing Kelly’s moves and mixing live action with animation seamlessly.  The scene was ripped off by Family Guy, inserting Stewie over Jerry.  Just mimic the original choreography and you’ve got three less minutes of creative thinking to do.  I doubt many viewers realize how many classic dance scenes Family Guy shamelessly parodies.

Overall,  Anchors Aweigh is a really fun musical comedy with great actors, thought out characters and an interesting plot to the end.  This would make for a great classic movie night with the kids.  The sailor’s plight to find women and keep up appearances keep adults snickering while the singing, dancing and antics with Donald will keep kids connected.

“-These men have other things to do.
–No they haven’t, they’re on leave.”