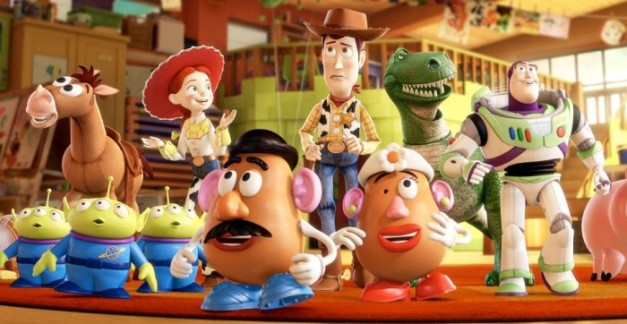 Once again, Pixar is the animation monster that can break barriers and land in the prestigious Best Picture category two consecutive years.  I dare to say that if the category had been extended to it’s present ten nominees in years past, Finding Nemo and WALL-E could have also been nominated Best Picture contenders.  But alas, history is already written.

Thanks to Pixar, and other major animation studios, the art of animation is finally getting the credit it deserves as a serious form of film making.  The category of Best Animated Feature is a relatively new award at the Oscars.  Created in 2002, Pixar’s Monsters Inc. lost out to Dreamwork’s Shrek.  But overall, it’s Pixar films that run the Animated Feature category and break into Best Picture.

Which brings us to Toy Story 3, giving us another look into the lives we never imagined our childhood toys had until the original Toy Story in 1995.  We’ve seen the stress and fear of being replaced toys can have when the new glow-in-the-dark guy with lasers arrives.  And we’ve seen how being loved and played with is more important than being a preserved collector’s item.  Now it’s onto phase three, where Andy has grown up and just doesn’t play with his toys anymore.  Before he leaves for college he’s given the choice to either donate his toys to the local daycare or keep them stored in the attic.  He’s a sweet kid, nostalgic about his imaginary games with Woody and the gang, so he chooses to keep them in storage, but through a mix-up, they are sent to Sunny Side Daycare.  There they meet Lotso, a pink teddy bear with a limp, who lets them think they’ll have a great time at Sunnyside.  What he forgot to mention was that they will be in the toddler’s area, full of destruction and drool.  So they decide to break out and find their way back to Andy before he leaves for college. 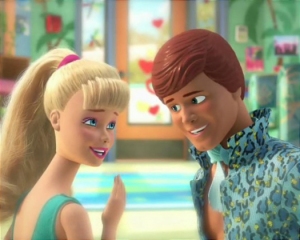 Along the way, we meet some fun new characters.  There’s Trixi the Triceratops who seems like the perfect match for Rex.  With her are the adorable Pees-In-A-Pod and Buttercup the unicorn.  But best of all is Ken for Molly’s sadly discarded Barbie.  He’s got a closet full of hilarious dress-up time and becomes an important character within Lotso’s evil gang who rules Sunnyside.

My main grief in this otherwise wonderful film is in the pivotal scene at the dump.  First, how did Slinky escape from the magnet?  I try not to let such a logistical detail get to me in a cartoon, but I wasn’t the only one who could not let it go.  And as the toys are heading toward the incinerator, holding hands and awaiting a slow melted-plastic death, this feeling of impending doom goes on for just a little too long.  I mean, this film is aimed towards kids, right?  That connection between death, the fiery pits of hell and the warning to cherish your toys goes just a little far here.  I could hear Woody’s warning to Sid in the original, “From now on you must take good care of your toys.”

Between impending doom and long playtime goodbyes, this film can be a real tear-jerker.  When my husband and I took my family to see this over Father’s Day weekend, nearly everyone cried.  My little brother could even admit it.  He’s part of that generation that has grown up with the Toy Story trilogy, and now at seventeen he can connect with this present day Andy even further.  The time will come for him as well, what will he do with his favorite toys?

If The Academy is looking to award Pixar for its outstanding years of service to making animation a serious form of film making to be reckoned with, Toy Story 3 will win Best Picture.