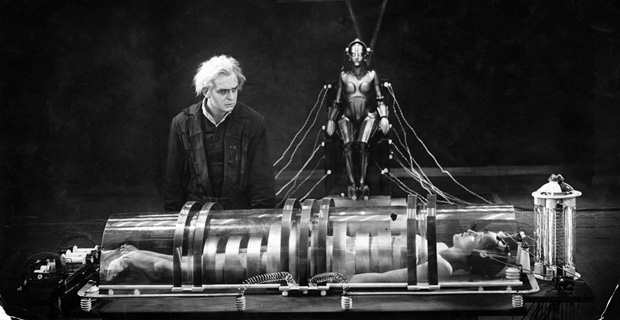 Metropolis is a silent film made by Fritz Lang, released in Germany, in 1927, at the height of German Expressionism.  While its idea of a working class and intellectual class finding a mediator to help restore harmony can feel like a half baked fairy tale, the influence of this film has made it an extremely important piece of early cinema.

In the film, Freder (Gustav Fröhlich) is the privileged son of the city’s creator, Joh Frederson (Alfred Able).  One day, Freder falls in love with a working class girl, Maria (Brigitte Helm).  In his attempt to find her, he witnesses a giant machine explode, taking many of the workers with it.  It becomes Freder’s awakening to how cruel the machines that run the city are to the lower class, forced to work at them.  Freder brings this to his father’s attention, which only gets an assistant fired, and summoned down to the depths where the workers toil.  Freder takes it upon himself to help the workers and experience their lot in life.  There, he finds Maria, preaching about a mediator who will come and bridge the gap between the working class and the intellectuals.

Meanwhile, Rotwang (Rudolf Klein-Rogge), the local inventor and mad scientist character, is building a robot woman based off of his obsession with Joh’s wife who died giving birth to Freder.  As Joh learns of Freder and Maria’s love, he agrees to let Rotwang kidnap Maria to give the robot her appearance in order to discredit her preachings to the workers.  But Rotwang has more sinister plans with his creation, and soon all of Metropolis is in great peril.

What I enjoy most about Metropolis is its visual qualities.  The whole film feels artistically amazing.  The architecture of the city  is wonderfully eclectic with a good amount of art deco, some very futuristic elements and even a Gothic cathedral.  The skyscrapers are colossal, look to be connected by a monorail system and have little vintage airplanes gliding between them.  In the depths, the workers look like they are inside an industrial nightmare with giant turbines whirling and steam blowing everywhere.  The machines are in constant demand, making the workers keep in a steady, slightly frantic movement.  The image of repeatedly moving giant clock hands to sets of blinking lights is unforgettable. 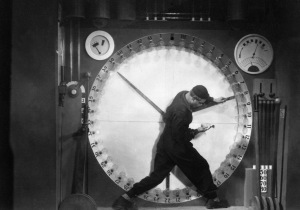 The fact that Metropolis has survived for over eighty years and has been restored with only a few minutes missing feels like a great feat of film.  For many decades, nearly a quarter of this film was missing.  It had been released and restored many times, but in 2008 a good chunk of the film was found in Argentina.  Today, it is widely available, including instantly on Netflix.  There, the quality of the film is beautiful and crisp most of the time and any missing pieces are summarized with text.

The influence Metropolis has spread through modern cinema is seen in countless films.  The robot shown helped inspire the look for C3PO in Star Wars.  Rotwang’s style has become the look of countless mad scientist characters, along with the decor of his lab.  The idea of robots that look just like humans is a key part of Blade Runner.  In fact, most science fiction urban dystopia films can be traced back to Metropolis.  Dark City and Gattaca spring to mind first, even Batman’s Gotham city share similar characteristics.  And Metropolis has influenced more than cinema.  Besides the Batman comics, the creators of Superman used Metropolis as his home city.  And it is said that the film helped spread the art deco movement throughout America and Europe.

“It was their hands that built this city of ours, Father.  But where do the hands belong in your scheme?”