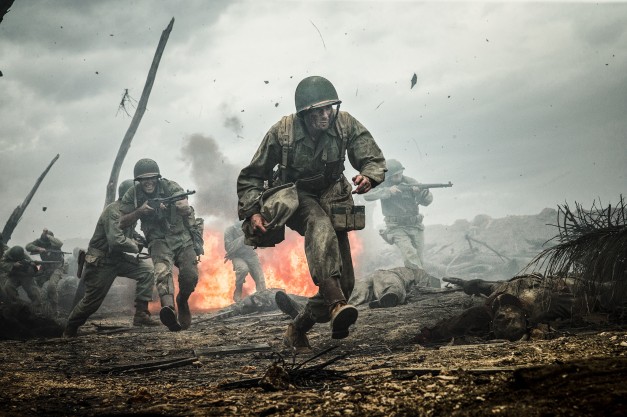 Not since 1998, with Saving Private Ryan, has there been a gritty war film depicting the bravery and American heroics of WWII nominated for Best Picture. With Hacksaw Ridge, Mel Gibson seems to bring the genre back for a new generation. Not for the blood-lust glory of a seasoned warrior, but to tell the story of a young medic who refused to carry a weapon. 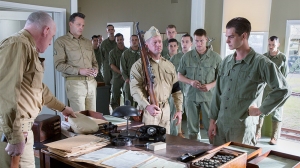 Private Desmond Doss (Andrew Garfield) was a young man from Virginia who volunteered to serve during WWII and due to his beliefs as a Seventh-Day Adventist he refused to carry a weapon or kill any enemies. This does not make him very popular during training, his superiors constantly calling him out on the matter. Doss is beaten by his bunk mates, has to fight being accused of insubordination and is even put on trial for refusing to carry a weapon. In the end, Doss is allowed to train as a medic and go into battle without a weapon.

The majority of the film depicts the horrors of war in the Battle of Okinawa. These gritty battle scenes go on and on and on. This brings out the relentless intensity of war and may be too intense and exhausting for some viewers. Gibson did a fantastic job portraying the fury, unhinged violence and the hell unleashed by war.

The beacon of light in the intense battle is Doss. Even after all the other able men have retreated back down Hacksaw Ridge, which is a sheer cliff with base camp below, Doss stays behind and looks for wounded men. He searched in the desolate, corpse and gore ridden battleground searching for men he can help. With each one he lowers them by rope down the ridge, one by one. It’s truly an amazing feat of bravery worthy of the Medal of Honor.

To be honest, Hacksaw Ridge seems to be bringing up the rear in this year’s Oscar race. The training scenes had an archaic, out of date, boys-will-be-boys vibe. Some CGI moments were not at all convincing and distracting. And while a little violence can go a long way, but after a while, I was numb to yet another soldier with his legs blown off.

However, I believe that Doss’s story is great, noble and deserves the recognition. Garfield portrays him well and makes him a hero we can easily identify with. I think the Academy chose Hacksaw Ridge as a Best Picture nominee to preserve Doss’s remarkable story and ensure that generations learn from his non-violent service, his fortitude and his unwavering sense of morality.